An Introduction to Nymphenburg Palace

Nymphenburg Palace (Schloss Nymphenburg) is a stunning former royal home in the City of Munich, Germany. Construction of the palace and grounds began in 1664, two years after the land was gifted by Elector Ferdinand Maria to his wife, to mark the occasion of the birth of his son and heir. The palace was intended as a summer home and pleasure palace, for recreation rather than for formal occasions of state.

A modest fee secures access to the Palace proper but on a warm summer's day, a simple stroll through the extensive grounds, admiring the parkland and gardens, can be awe inspiring, pleasant and informative. You will see in many of the photographs on this page that the gardens appear almost deserted, despite it being what was in fact a beautiful late summer afternoon. The reason for this is simply that these photographs were taken in late September, when there was the small matter of a little festival called Oktoberfest taking place elsewhere in Munich...

How to Get to Nymphenburg Palace from Munich City Centre

There are a number of transport options available for getting to Nymphenburg Palace from Munich City Centre. You can take the S-Bahn (surface train) from either Marienplatz (City Centre) or the Hauptbahnhof (Munich Central Station) to Laim. Nymphenburg Palace is then within walking distance (less than half an hour) along Wotan Strasse, or the Number 51 bus can be taken from outside the station.

Alternatively, you may wish to take one of a number of suitable trams directly from the City Centre to within a few short minutes' walk of the Palace. 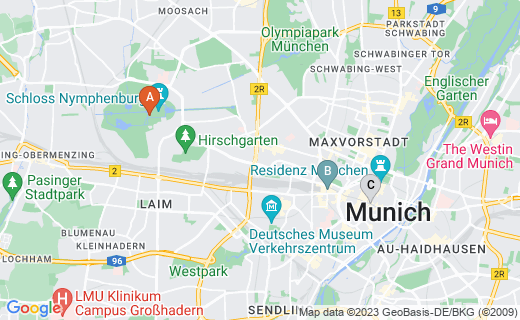 The Lakes, Canal and Fountains of Nymphenburg Palace Gardens

Its water features form a big part of the attractions of Nymphenburg Palace's grounds. The features are all fed from the canal system and include a number of small and large lakes, as well as fountains which shoot magnifient and spectacular plumes of water in to the sky during the summer season. The marble cascade can be seen from the steps to the rear of the palace, where the water flows down from the Wurm canal to be diverted back to the front of the palace via the half-mile long central canal.

The excellent video below gives some idea of the size of Nymphenburg Palace and its out buildings. Shot from the front of the Palace, this video shows the way in which visitors will enter from the main road.

The French influence on Nymphenburg Palace Gardens, dating back to the early part of the 18th century, sees part of the gardens constructed based on precise geometric shapes and accurately measured distances. The English gardens to the north and south date from almost a century later and are more about letting nature take over and spread out as was intended, either as lush meadows of flowers or magnificent forests of trees.

The rectangle in the approximate centre of the map below incorporates Nymphenburg Palace and its gardens. The map also allows appreciation of the extent of the Palace parkland further to the West, including the Grosser See (large lake). 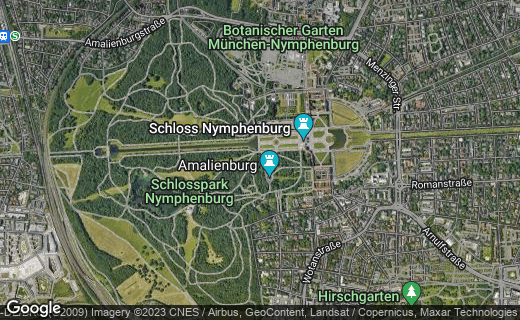 Nymphenburg Palace itself is a magnificent edifice and a great deal of time can be spent in its admiration. Hopefully, however, if the weather is fine when you visit, you will allocate a little of your time to exploring the grounds of the palace and seeing for yourself the gardens, greenhouses and outhouses which together form the bigger complex.

Thank you for taking some time to look through this site and any feedback which you have may be left in the space below.