The Greek Island of Santorini

We're Off to the Med!

Virtually any European country with a Mediterranean seaboard is a worthy choice for a summer holiday for those Europeans who live further north. From most Northern European countries a flight to ‘The Med’ will be less than three hours duration; this is ideal for families with young children who are likely to become restless and irritable on longer flights. Why fly long haul with such a vast range of destinations almost on your doorstep? The Mediterranean is to the European as The Caribbean is to East Coast American.

Mediterranean literally means ‘The middle of the earth’ and this is an appropriate name; there is a such a vast mishmash of different cultures, cuisines and ideologies that most Europeans are confident they can return to Mediterranean shores year after year and still experience a totally different holiday each and every time.

Going from west to east we will mention several European countries which are the most popular destinations – not forgetting the many and diverse Mediterranean islands. All these places have a May to October season when the weather is suitable for sunbathing, but that is not to say that a visit at any other time of year would not bring its own particular advantages. For instance, Spain in late April and early May is perhaps at its best when the trees are in blossom and the landscape has not yet become parched with lack of rain.

Tangier in Morocco - the Gateway to the Mediterranean

Spain, which has always been immensely popular with the British, boasts six hundred ‘Blue Flag’ beaches. These award winning beaches uphold the highest standards of safety and cleanliness. Cheap and frequent flights to Malaga, Alicante, Murcia, and Barcelona have made the whole of the Southern and Eastern sea boards of Spain easily affordable for travellers who might otherwise have had no choice but to stay at home and endure the lack of sunshine in the UK. How can Northern Europeans, who shiver for half of the year, not fail to be tempted with such names as ‘Costa del Sol,’ ‘Costa del la Luz’ and ‘Costa Brava’? Not to mention the lure of cheap sangria and endless sun! There are the Spanish Islands too, some of which are located in the Mediterranean. Majorca, Menorca and Ibiza are the largest and enjoy a temperate climate from May to October; they are mentioned below.

The Balearic Isles (belonging to Spain) and lie off the coast of South Eastern Spain are also a popular holiday destination. Majorca (sometimes known as Mallorca) has always been a favourite from the very onset of package holidays in the early seventies. The island offers something for everyone. A new modern international airport has been constructed in recent years to deal with the sheer volume of air traffic but the island remains largely unspoiled and has not lost its uniqueness. The eastern coast is the place to be if you enjoy quiet sandy coves but the opposite side of the island is more suited to the young and lively crowd and is more built up.

The neighbouring island of Menorca and it's even quieter companion, Formentera do not offer such a vast range of things to do but are still worthy of a mention for their beauty as well as their tranquillity. If you want to sunbathe on a deserted beach you may still have a chance here.

Ibiza has earned a reputation as being the most hedonistic island in the Mediterranean but it also has quieter areas which attract artistic types too. There is no lack of interesting features and quaint fishing villages away from the main tourist centres of Ibiza Town and San Antonio.

Unspoiled Beaches are Commonplace Throughout the Mediterranean

The South of France

The South of France has always had a reputation for being the playground of the rich and famous. Fly to Nice, Toulouse or Avignon for a taste of the French Riviera or visit the only Mediterranean island that belongs to France, the island of Corsica; this is not as developed as the islands of Spain and thus remains largely unspoiled as tourism seems to be concentrated around one particular area. Southern France enjoys a climate comparable to Spain and offers the discerning tourist some beautiful spots to enjoy a vacation. The food and wine in this region are of exceptional quality and will make your holiday to the region complete.

The Italian resorts are well served by the airports at Milan in the north and Pisa, and Rome on the western coast serve the resorts such as Sorrento and the Bay of Naples, where the visitor can easily visit the beautiful Island of Capri. The Italian Island of Sardinia and the Mediterranean’s largest island Sicily are also well within reach of the traveller departing from most Northern European regions. The Italian Riviera consisting of such resorts as Lido de Jesolo and Rimini is served by the airport at Venice so here it is possible to see all the sights and explore the rich history of the region while still returning home with a coveted sun tan.You can take an afternoon tour to San Marino, the worlds smallest principality where you will enjoy a marvellous view.

Greece, Turkey and the Dalmatian Coast

The up and coming resorts of Croatia and the Dalmatian coast are perhaps a little behind in embracing tourism but development and investment in these regions with a sun drenched Mediterranean coastline to exploit are now making them a more popular holiday choice. The political instability of the past is now over and the population view tourism as the way ahead.

Greece and its Islands possibly offer the widest choice available for a memorable holiday. With a wealth of mainland locations to choose from and literally hundreds of islands there will be something for everyone. Greek Island hopping is a favourite pastime of those with nautical leanings but for those who travel by plane, there's always an international airport that will allow you to visit most of the larger islands. Corfu, Kefalonia, Rhodes and Crete, to name but a few can easily be reached within three to four hours flying time from the UK.

Neighbouring Turkey is a hugely popular destination due to the wonderful beaches and cheap package holidays. Travellers to Greece can easily visit both but will certainly get more for their money in Turkey.

This article has only discussed some of the European vacation destinations which boast a northern Mediterranean seaboard, but in the south, you'll find the North African countries of Egypt, Tunisia, and Morocco. Also, there are other Mediterranean islands such as Cyprus, Malta, Sardinia, and Sicily. All these can easily be visited on a cruise as shown in the video below.

The beauty of a Mediterranean cruise is that it allows you to visit several countries in a short space of time and enables you to have a sample of several different cultures enjoying some time at sea into the bargain. Fly/cruises nowadays mean there's no longer several days wasted before you arrive at the Mediterranean. Flying to places such as Venice and Barcelona will mean you can see and do so much more on a typical seven to ten-day cruise. 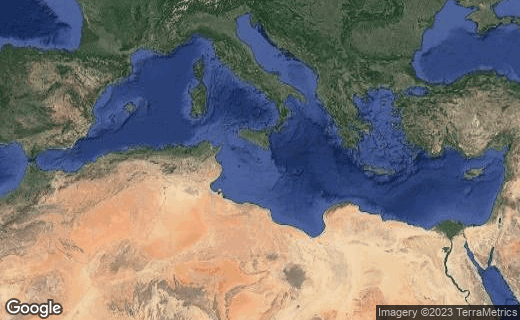 Why Not Take a Cruise Around the Mediterranean? See a Selection of Different Countries With a Mediterranean Seaboard.

After reading this article, would you choose a vacation in the Mediterranean?