Camping in the Fall Season 4o Years Ago

Camping in the Belgium Ardennes in October

In the early 1980s, when our kids were still rather young, we used to go camping in the Belgium Ardennes during the Fall Holidays. We had found this very back to basic camping site, situated along the river the Ourthe, close to the city La Roche-en-Ardenne.

It was just a clearance in the woods along the river. It had one toilet and one sink and the owner came during the afternoon and if you happened to be there, you had to pay a small amount of money.

It was a beautiful place at the river bank with at the other side the Ardennes mountains covered with orange-brown colored trees. Of course at that time we didn't have the digital cameras yet and the photos we took are not all too well, but at least you'll get an impression how it looked like.

That little white van in the picture was ours. 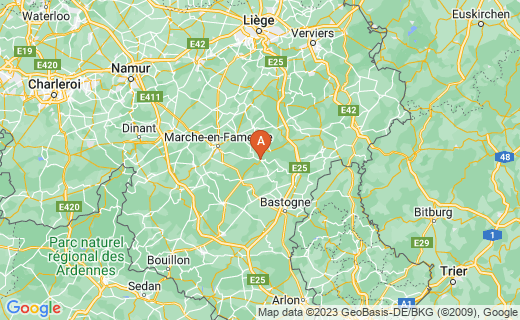 Camping with Two Kids in a Little Van

At that time (40 years ago) my hubby was a Handy Craft and Art History teacher in secondary school (comparable to High school I guess), so he was free too during school holidays. As we're rather back to basic people who love nature, we decided to take a short holiday in the Fall Season, because then the woods in the Ardennes in Belgium are changing to the Autumn yellow-orange-brown colors.

We didn't want to take too much stuff with us and we decided to leave our big tent at home and just camp in the little Toyota van we owned at that time. But how do you camp with 2 adults, 2 kids and 2 dogs in a little van?

Camping in a Small Van Is a Matter of Organizing

My hubby likes to invent things and think up solutions for making things easier or possible. This is what he came up with:

Mind you, it was a time that nobody said you couldn't have kids in the back of your van.

He made a wooden box for our clothes

This wooden box was also the seat for the kids when we were driving. We put some anti slip stuff on there and our cushions and that worked fine. The box was divided in 9 small compartments in which a plastic storage bin would fit. One tray for Mom, one tray for Dad and one tray for the kids. It was enough for all the clothes (we didn't take that many though)

He measured the kids

He found out that they still fitted in the width of the van, so they could sleep from side door to side door. The kid's bed bottom was made of plywood, strong enough to hold them both. When we were driving it was sitting between the wooden box and the front seats of the van. When in place as a bed it was hanging from the ceiling and secured to the side.

So we slept in the length of the van and the kids above our feet (we didn't want them to fall on our heads).

We had two dogs at that time, both Sky Terriers. They were on a long leash during the day and at night they slept under the van outside or if it was stormy and rainy, they slept on the front seats.

It worked all very well.

The dogs: Sky Terriers Masha and her daughter Olleke

Taking a Bath in the Ice Cold River

Each morning we took a bath in the cold water of the river the Ourthe. At the point where we were camping, this river was not deep at all as you can see. It was only somewhat deeper towards the mountains at the other side. It was cold, but refreshing and as you can see it didn't take too long for the kids to go in.

Sometimes we had some nice Indian Summers when it was still rather warm outside during the day.

Our Cooking Was Very Basic Too

We didn't take along fancy cooking stuff, we were very basic. We had a small camping gas to make hot drinks for breakfast or coffee and tea. We took along one or two cans of split pea soup and we ate that with some bread. We took the kids out for French fries and a hot dog or we bought some meat and grilled it on a very small and basic portable charcoal barbeque. Camping and barbecue go together so well.

In the years that we have visited this small camping site, it only happened one time that we were not alone there. All other times none of the owners of those caravans were there when we were there. It was so quiet and relaxed. We only heard the water running through its bedding and the birds singing in the trees.

It's been a long time since we were camping there and I have tried to find the spot on Google Earth, but failed to do so. It probably is given back to nature. It was only a small meadow in the woods with one open sink and one closed toilet for all campers.

Some years it so happened that we never saw the owner in the afternoon. We could've cheated the man out of his money by just leaving, but we never did. We always put money in the mailbox that was hanging on the side of the toilet house. There wasn't a shower, but who cares when one can take a bath in a river.

An Overview of Our Fall Holiday Camping Site

We used to take the kids and dogs for an early morning walk each day along the river the Ourthe. The nature there is so beautiful, especially in the Fall season when the woods colors turn into a flaming yellow-orange-red palette. After our walk we took the kids out on a ride through the surroundings, visiting small villages, seeing nature's beauty in full glory. Visiting different museums and having drinks on the terrace at the local cafeteria.

In Fall season you can't do without boots while camping, because each morning the grass is covered in morning dew for a few hours. Today's boots for kids are so colorful.

Early Morning Walk Along the River the Ourthe

The River Ourthe - If You Love Nature, Than This Is It.

I've tried to find English speaking videos about the river the Ourthe and the city La Roche-en-Ardennes, but that wasn't so easy, so you'll have to do with these.

The Ourthe river is a long one and it has many faces. Wild river rafting is one of the outdoor sports you can do on this river. There are a lot of beavers living in this river and you can go trout fishing too.

Enjoy yourself watching these videos.

Don't Forget to Take a Camera

You will ever regret it if you don't take a camera along on your camping trip. There's nothing wrong with the today's small pocket cameras, they let you make beautiful pictures. You probably might have one already and today almost each mobile phone can make excellent pictures.

However 40 years ago we didn't know yet that one day in the future we could take pictures with a cell phone. So my photos were made 40 years ago with an analogue camera.

The Kids Are Grownups Now

The kids are all grownup and we don't camp wih the kids anymore. They are living their own life. However I myself still camp in my big van on a regular base, when I have to go on sheep inspection trips.