A Monument to US - Canada Friendship and Peace

Anyone crossing the border between the US and Canada on I-5 near Blaine, Washington and Surrey, British Columbia will no doubt notice the beautiful grounds of Peace Arch Park. Surrounded by a lush green lawn and colorful beds of flowers, the centerpiece of the park is the white, 67 foot (20.5 meters) tall Peace Arch.

With flags flying from both countries at the top, the arch straddles the boundary between the two nations and has stood as a monument to the peaceful relationship between the US and Canada since 1921.

Maybe you have never heard of the Peace Arch or perhaps you've driven past, but don't know why, when, or by whom it was built. On this page you will find information about this unique monument and its history.

All photos by the author, Vicki Green, unless credited otherwise.

Where is the Peace Arch?

The Peace Arch is located on the 49th parallel at the border between the United States and Canada near Blaine, Washington. It is one of the most heavily used border crossings between the two countries. The highway is I-5 in Washington State and Canadian BC Highway 99.

A Map Showing the Peace Arch 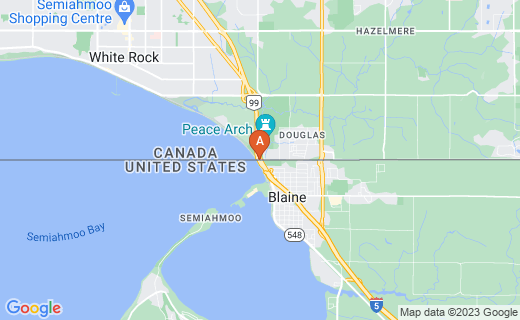 The Peace Arch straddles the border between the United States and Canada at the border crossing near Blaine, Washington.

The Peace Arch border crossing is the third busiest one between the US and Canada. Approximately 4000 vehicles per day cross this border.

Take Part in a Poll About the Peace Arch

Have you ever crossed the US-Canada border at the Peace Arch Crossing?

"Children of a Common Mother"

The Peace Arch on the United States Side

Surrounded by beautiful grounds, the top of the US side of the Peace Arch has the inscription "Children of a Common Mother".

The Peace Arch is sited directly on the border between the US and Canada as can be see from the photo of this marker on the boundary in line with the Peace Arch.

"Brethren Dwelling Together in Unity"

The Peace Arch on the Canadian Side

Gates and Inscriptions Inside the Peace Arch

Under the arch on the inside of the Peace Arch are two open gates, one on each side. On one side the inscription says:

and on the other

"May These Gates Never Be Closed"

Who Built the Peace Arch?

The Peace Arch was not a monument built by any government. It was a project conceived by Samuel Hill, a wealthy Pacific Northwest businessman. Sam Hill also built the Maryhill Museum and the Maryhill Stonehenge replica in southwest Washington State. In 1915 Samuel Hill attended a 100th anniversary celebration of the ratification of the Treaty of Ghent at the US - Canada border near the current site of the Peace Arch. The Treaty of Ghent ended the war of 1812 between the US and Great Britain. After attending the ceremony, and perhaps in part because of his Quaker roots, Sam Hill was inspired to build a monument at the border to commemorate the Treaty of Ghent and the peace and friendship between Canada and the US. Hill began a fundraising effort to raise money for the monument and architect Harvey Corbett donated his services. Construction began in 1920 and the Peace Arch was completed in 1921 with the dedication on September 6th.

Sam Hill's Peace Arch: Remembrance of Dreams Past
This book has everything you want to know about the Peace Arch, from its construction to the many events that have happened since. Richard Clark did an amazing amount of research to find all of this information.
Buy Now

Richard Clark, a resident of Blaine Washington, researched for 14 years to compile this fascinating book about how the Peace Arch came to be built and many of the events that have occurred at Peace Arch Park since it was completed.

The plaque honoring Samuel Hill on the US side of the Peace Arch says:

" In Commemoration of the Life and Works of

A True Quaker - Foremost in Peace

And Goodwill - Whoever Sought

To Build Up But Never Tear Down

This Tablet Erected By

Built on the 49th parallel

Built through the efforts of Samuel Hill

Commemorates the Treaty of Ghent

On the US Register of Historic Places

On the Canadian Register of Historic Places

Both a state and provincial park

The Construction of the Peace Arch

Every time I cross the border at the Peace Arch crossing and see the Peace Arch, it has a special personal significance for me. Like the Peace Arch, my ancestors for several generations have straddled the border between the US and Canada, with births, deaths and other life events occurring on both sides of the line. In this photo above taken while the Peace Arch was under construction, the man standing at the top is my great-grandfather, Watson Monroe Hazen who was one of the construction workers. The photo is tattered and torn because my mother, who passed away in 2012, often carried it with her to show people. She was so proud that her maternal grandfather helped to build the monument.

Half USA - Half Canada Flag (American Canadian) Sticker
Patches like this US-Canada item are popular for international gatherings at the Peace Arch.
Buy Now

Symbols of Friendship Between the United States and Canada

Through 2010 for many years there was a celebration called "Hands Across the Border" every June at the Peace Arch International Park. It was a favorite event for youth groups like Boy Scouts and Girl Scouts to meet their counterparts from the other side of the border to exchange flags, patches, badges and other symbols of friendship.

The Grounds of the Peace Arch Park

The grounds at the Peace Arch are beautiful with a large lawn area surrounded by shrubs, trees and flower beds. One of the flower beds on the United States side of the park features a flower bed with flowers blooming in red, white and blue colors to create a US flag.

As is indicated on the sign in this photo, the Canadian side of the Peace Arch is designated as the British Columbia Peace Arch Provincial Park.

The Canadian Flag in Blooming Flowers

Flower Bed of the Flag of Canada

As you might expect, on the Canadian side there is a beautiful flower bed in the red and white maple leaf design of the Canadian Flag.