Penrith Castle dates back to the late fourteenth century. The castle is largely in ruins now but it is still possible to get a feel for the history of the place as you walk around its walls and enter its one time inner sanctuary. There are also a number of activities in which it is possible to engage within the public park in which Penrith Castle now stands, even though they are largely seasonal and geared towards the summer months. The castle's extremely convenient location also means that visitors to Penrith and this part of the English Lake District can easily take some time out to explore a very different side of the region's history and attractions.

It is abundantly clear immediately upon your arrival at Penrith Castle that this centuries old building is in a poor state of repair and likely to be very unstable. This means that the safety notices genuinely are for your own protection and proper attention must be paid at all times. Children should be properly supervised and dogs kept on a leash. Even where the "photo of a lifetime" for the family album appears possible, no climbing on the walls to any extent should be undertaken.

The History of Penrith Castle

The construction of Penrith Castle is believed to have been started in 1399 as part of the area's defences against attacks by Scots from the north. As is often the case from days when history was less reliably recorded, stories of its precise origins vary. One story is that it was built at the instigation of William Strickland, a future Bishop of Carlisle and Archbishop of Canterbury, who subsequently passed ownership to the then Lord of the Manor of Penrith, Ralph Neville. It is now more popularly believed, however, that it was Neville himself who instigated construction. Curiously, it was not built on the highest point of land in the immediate area but rather upon what may well have been the foundations of an earlier Roman fort, dating back to more than a thousand years earlier.

The development of Penrith Castle continued through much of the fifteenth century. During this period, ownership transferred from Ralph Neville to his son, Richard, and subsequently to his son. It was in 1471 that the castle became the property of the then Duke of Gloucester, who would ultimately become King Richard III. It was the Duke who further developed the castle to transform it in to a residence, rather than simply a military establishment.

Richard's ascendancy to the throne largely spelled the end for Penrith Castle as a working concern. It knew several token changes of ownership through the centuries and although it did serve a brief, minor role during the seventeenth century English Civil War, it was never again used as a place of residence. Parts of it were deliberately dismantled but much of it was simply left to fall in to ruin and the way it can be seen today.

How to Get to Penrith Castle by Bus, Car or Train

Penrith sits on the very edge of the Lake District National Park. Penrith Castle is located on the outskirts of Penrith town centre. It is only about a mile from the M6 motorway (Junction 40) and is literally straight across the road from Penrith railway station. The station at Penrith is a West Coast mainline station, which means that there are regular direct services to and from cities such as Glasgow (Central), Birmingham (New Street) and London (Euston). The castle is only a few minutes' walk from Penrith bus and coach station, from which services regularly operate to most local towns and villages. 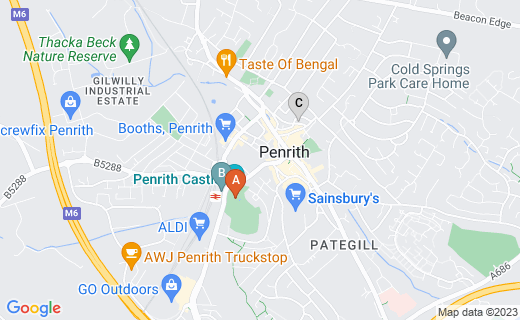 The Lake District National Park is unquestionably one of the most beautiful parts of England and indeed of the entire United Kingdom. If you are visiting the Lakes, however, the overwhelming variety of options re places to visit and see can lead to confusion and perhaps your missing out on the place or places that would appeal most to your tastes and requirements. A little advance research can in this respect pay huge dividends and the beauty of the book featured to the right is that it is a Lonely Planet production, coming with the guarantee that its author has personally visited the area to research its features and benefits before communicating them onwards to interested readers or researchers. 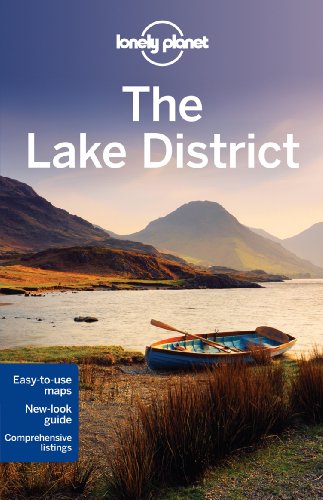 Lonely Planet Lake District (Travel Guide)
Whether driving tours or fell walks are your thing - or even if you simply want to explore the beautiful scenery - this guide is indispensable for potential or first time visitors to England's Lake District. It includes stunning photographs, maps, detailed information on specific locations, outdoor activity guides and even tips for planning your trip. It is surely the ultimate guide to planning your Lake District visit and enjoying it to the full.
Buy Now

There are a number of facilities laid on for visitors to Penrith Castle Park. The majority are available only in the spring and summer months, from April through to September. They include bowls, tennis and crazy golf. Full details and the latest pricing information can be obtained from the local council's website. It is also possible to simply take a stroll through the park during daylight hours all year round.

Where to Stay or Eat near Penrith Castle

The location of Penrith Castle and Park means that there are a wide variety of places to stay and/or eat, right on its doorstep. On the occasion of this visit (on a particularly cold March morning) a delicious lunch and two pints of top quality real ale were enjoyed in the Agricultural Hotel, less than a minute's walk away. The Station Hotel is equally close by, while there are many other cafes, restaurants and hotels within extremely easy walking distance. If you are looking for somewhere to eat breakfast in Penrith, the George Hotel has to be particularly recommended for its truly excellent full English. 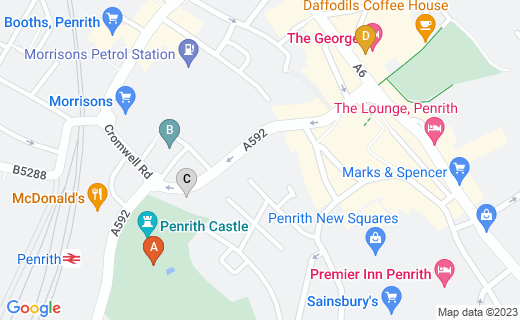