Pictures of Islay around Loch Indaal

Loch Indaal is the sea loch which bites in to the south-western corner of the Isle of Islay, off Scotland's West Coast. There are a number of settlements, harbours and small boat berthing facilities on the loch, which also facilitates saltwater fishing - both from shore and boat - and water sports such as jet skiing. The pictures featured on this page were taken in July 2013 at different parts of the shore of Loch Indaal, showing the loch from different angles and affording an insight in to some of the villages and other landmarks along its varied shoreline. "A" class roads border much of the loch, allowing easy access to the waterside.

Where is Islay and Loch Indaal? 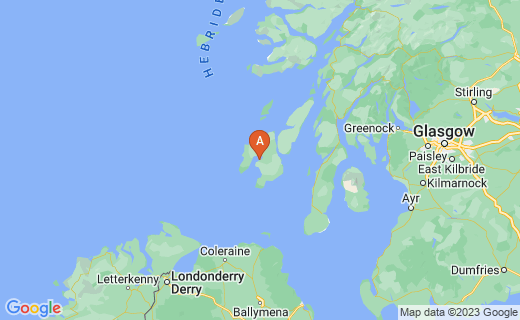 Which type of waterside scenery in general do you find most appealing?

Pictures of Bowmore Harbour and Pier on Loch Indaal

Bowmore is the administrative capital of Islay and sits right on the eastern shore of Loch Indaal. It has a small harbour which is home to both fishing and pleasure boats, as well as a pier extending out in to the loch along which it is possible to walk and secure extended viewing of both the village and Loch Indaal.

Bowmore Distillery is adjacent to the harbour, with public tours available at a very a modest price. There are also several shops, including a small supermarket, to service your daily needs, while Islay's Tourist and Visitor Information office is just a stone's throw from the harbour and pier. The Harbour Inn right at the harbour and the Lochside Hotel two minutes' walk away both afford rooms and dining with views looking out over the loch.

Video Footage of Bowmore Pier and Harbour on Loch Indaal

The coastal path past Bowmore Distillery from the harbour grants stunning views over Loch Indaal in several directions. The villages of Port Charlotte and Bruichladdich can easily be distinguished on a clear day.

Map of Islay and Loch Indaal

The map immediately below shows the positions of Bowmore and Port Charlotte on Loch Indaal in relation to the ferry terminals at Port Askaig and Port Ellen. 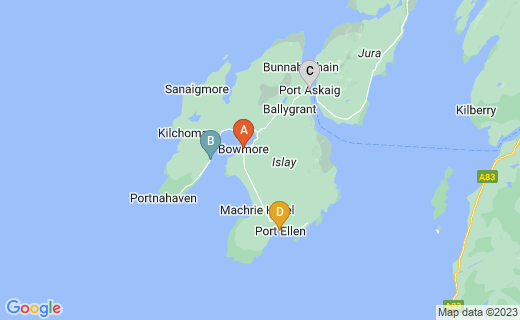 Pictures of Loch Indaal at The Strand

The Strand is a stretch of beach on the northern shore of Loch Indaal. The main Bridgend to Portnahaven road, the A847, runs immediately alongside, allowing stunning views of the loch from the car but also affording plenty of places to park and get out for a walk. Drivers should be particularly careful on this stretch of road of animals such as sheep and cattle straying in to the path of approaching traffic.

Port Charlotte is a village on the western shore of Loch Indaal. It is possible to go down to and walk along the pier, where you will get extensive views around the loch, including of Bowmore in the distance.

The Port Charlotte Hotel and Restaurant

It is fairly obvious from the prevalent weather conditions that the photos on this page were not all taken on the same day. They were in fact taken over a four day period in early July 2013, with the first two days being overcast and the second two warm, bright and sunny. The photos of Port Charlotte alone were taken over the course of two days. On the first (overcast) day, a visit was made to the Port Charlotte Hotel for lunch and on the second (beautiful) day, a further visit was made in the early evening for dinner. The food in the hotel is fabulous, making it both a convenient and rewarding place to eat as you explore Islay and Loch Indaal.