On the shores of the Potomac river sits this beautiful little white brick lighthouse. It has been called the "Lighthouse of Presidents" since it was used as a presidential summer retreat during the 19th century.

The lighthouse is open to the public and there is also a museum and gift shop.

Piney Point lighthouse was built in 1836 by John Donahoo. Donahoo built many of the first lighthouses along the Potomac and Chesapeake Bay. His designs were very cost effective and Piney Point was the 10th of 12 lighthouses that Donahoo designed. Initially Piney Point had a fixed white light which consisted of 10 lamps and 10 reflectors. In 1855 a 5th order fresnal lens was ordered from France and this made a big improvement to the light. It changed the light from white to yellow and increased the visibility for mariners. The light was automated to an electric light in the 1950's.

Donahue also built a one story keepers dwelling near the lighthouse. It was rather small and in 1884 a second floor was added to the building. The keepers job was eliminated once automation came to the lighthouse and in 1964 the lighthouse was decommissioned.

information on Piney Point was gathered from Lighthouse Friends at http://www.lighthousefriends.com/light.asp?ID=437

I created a postcard out of the photo I took below.

Guiding Ships along the Coast

Fog frequently obscured the treacherous coastline near Piney Point and a bell tower was added in 1880 to help this problem. The bell tower was next to the lighthouse tower. This tower deteriorated over the years and has since been torn down.

Piney Point is located 14 miles up the Potomac river from the Chesapeake Bay. Because of it's proximity to Washington D.C. Piney Point was a popular retreat from 1820-1910. Presidents James Monroe, Franklin Pierce, and Theodore Roosevelt were all known to use Piney Point as a getaway. Other Washington notables that visited the retreat were Henry Clay, John C. Calhoun and Daniel Webster.

We were at Piney Point at mid morning when I took this photo. You can really see the size of the lighthouse from this photo. It is really fairly small compared to many lighthouses. There is a boardwalk that goes from the lighthouse to the keepers house and then on the dock by the river.

I finding it fascinating to read about lighthouses. There is so much history in these beacons of the sea. 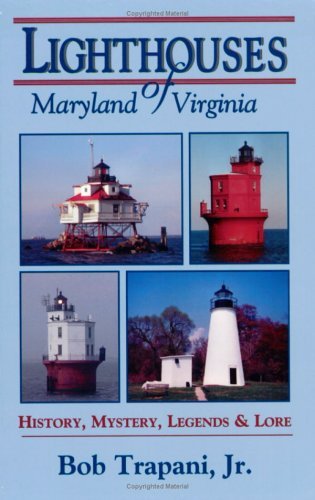 Lighthouses of Maryland and Virginia

This book gives you an introduction to the lighthouse along the coasts of Maryland and Virginia.

Where is Piney Point?

This map that was on the lighthouse grounds give you a perspective of where the lighthouse is located at the southern end of the Potomac. You can see how the Presidents could arrive there in short order from the White House in Washington D.C.

View from the Dock

I love trying to capture lighthouses reflected in nearby water. This one was a bit difficult because the water was filled with plants, but I still think the reflections adds interest to the photograph. To capture some good reflection shots you need to have the sun at just the right angle in the sky or capture it on a cloudy day. This photo was taken in the early morning.

I'll have to get one of these for my collection. I love having small miniatures of the lighthouses I have visited.

Piney Point would be a great addition to a lighthouse collection.

Do you have a favorite lighthouse? - stop by and leave me a note