Though small in size, Rhode Island is rich in history, culture and natural attibutes

To prove the point, the official name of the state is: 'Rhode Island and Providence Plantations.' Roger Williams founded the Providence Plantations colony in the area that is now the City of Providence. It was merged with the colony founded near present-day Newport called Rhode island. It was located on Aquidneck Island, the largest of several islands in Narrangansett Bay. Join me in learning more about this fascinating little state - you may want to add it to you 'must visit' sites! ;-)

John H. Chaffee Blackstone River Valley National Heritage Corridor - A good place to start, but there is so much more...

The watershed of the Blackstone River runs from Worchester, Massachusetts, to Providence, Rhode Island. It is known as the "Birthplace American Industrial Revolution." It links two states and 24 communities. The Blackstone has had up to 30 dams over its 46 mile length. Over time, these various dams created marshes and wetlands that are now part of the region's ecosystem.

Founder of Providence Plantation colony in 1636

Williams was an English Protestant theologian. He was an early advocate of religious freedom and the separation of church and state. Williams also might be called the first abolitionist in North America. He organized an early attempt to ban slavery in any of the original thirteen colonies.

He started the First Baptist Church of Providence, the first in North America. He studied Native American languages and stood for fair dealings with the Native Americans. He was forced out of Massachusetts Bay Colony for his beliefs and founded "Providence Plantation" as a free proprietary colony seeking religious freedom and political tolerance.

Connecticutt to the west; Massachusetts to north and east.

Rhode Island is the the 2nd most densely populated as well as the smallest state. It is the 8th least populous. It is separated only by water from New York's Long Island to the southwest.

Rhode Island was the first of the original 13 colonies to declare independence from British rule.

Rhode Island's official nickname is "The Ocean State" - it is easy to see why on the map - note the many large bays and inlets.

Carries the first, lowest reference number in the National Register of Historic Places

Moses Brown, Providence, Rhode Island, hired Samuel Slater to produce a working set of machines after he was unable to spin cotton-yarn using water-power. Construction of the machines, by Slater, following techniques he learned in England, included a dam, waterways, waterwheel and mill. These were completed in 1793. 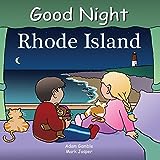 Family History and Genealogical Resources for Rhode Island - Do you have ancestors with ties to Rhode Island?

Here are two great resources to help you in locating sites you may want to visit based on the activities of your ancestors. Please recommend other sites that might be included here that you know of or discover. Thanks! ;-)