More History and Things to See than You can Imagine

The island of Rhodes is part of the Dodecanese Islands of Greece. There have been volumes written about the island and its numerous historical and cultural sights, so I'll try to skip over the usual travel guide type of info.

I stayed at a resort in the town a Faliraki, just south of Rhodes town on the east coast of the island. Although a typical higher end hotel, the service was great as was the beach. My fellow tourists were mostly overweight Germans and nouveau riche Russians with a smattering of other Europeans. One of the strangest things I saw was on my walk towards the center of Faliraki town: I suddenly came upon a small shop the looked like an old disused petrol station selling real fur coats and hats. This during a summer that had temps of about 35 degrees Celsius. The owners (two bleached blonde middle-aged Russian women) were sitting in front of the shop on deck chairs waiting for Russian tourists to stock up on cheaper furs than they could get back at home.

Faliraki town itself was a disappointment. It is basically 2-3 streets full of bars and tacky souvenir shops. The clientele here was almost exclusively young Brits doing their usual binge drinking. It's hard to get over the habit of drinking as much as you possibly can before midnight, even though the bars here were open until about 5-6 AM. As you can imagine, it was not a pretty sightseeing drunken, vomiting, loud Brits in the narrow streets of the town.

The picture of the harbor above is the supposed site of the Colossus of Rhodes, which was one of the Seven Wonders of the World. Although no signs of it remain today the statue must have been an awesome sight to behold. I couldn't help but buy a small model of what the Colossus if believed to have looked like. However, the common view of it being of a figure of Helios the Sun God straddling the harbor with one foot each where the two statues in the picture above are is the creation of a French artist for hundreds of years after the collapse of the statue during a massive earthquake.

Another interesting aspect of my time in Rhodes was taking the water taxi from Rhodes town back to Faliraki. The "captain" of the boat has his whole right arm in a cast and was talking on his mobile phone with his left hand, and was steering the boat with his left knee. When he needed to make a bigger turn he told the teenage girl ticket collector to turn the wheel the direction he wanted to go. This was quite amusing when seeing it for the first time, but not so much when you think that the captains of the bigger ships plying Greek waters might be the same.

The bus ride into Rhodes town and back as well as to Lindos and back were another disturbing episode. The bus is absolutely chock full of tourists both ways behaving in ways that they probably wouldn't do on a bus back home. Pushing, swearing, aggression and stress are the norm on these buses. Everyone fights a life-or-death fight for a seat on the buses where the ride is not all that long to either Rhodes or Lindos from Faliraki. This is the reason I decided to take the water taxi back from Rhodes town, opting to risk a ride with a one armed captain using his good arm to make a call than to fight my way onto a bus.

The town of Lindos halfway down the east coast of Rhodes has an impressive acropolis above it, which dates from Classical times. The town itself has tiny, winding streets full of shops and cafes and the streets are beautifully paved with local white and black pebbles laid out in various designs. The town has great beaches with crystal clear water. Under the acropolis and right just outside the town there is also an ancient amphitheater. Inside the town itself there are very ornate houses which were owned by wealthy sea captains of the Middle Ages. 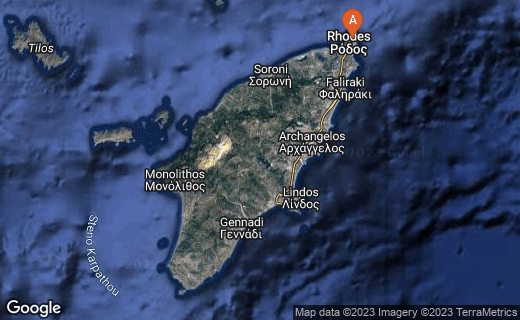 The island of Symi just off the north coast of Rhodes is a trip worth taking, although the huge tourist ship I took there was trying on the nerves. People are packed in as tight as possible and many of your fellow tourists seem to take these day trips because they were recommended by their hotel staff. I say this because many of them had no idea where we were going or why Symi is worth seeing. Despite the small harbor town being full of gawking foreigners, Symi was excellent. The harbor is full of luxury yachts from around the world, and if you manage to escape the core of the town, you can find many small shops selling excellent local herbs and spices, as well as sea sponges, which Symi is famous for. These sponges are still gathered by locals by hand and are excellent for use in bathing. Small ones can be bought for 1-2 euros, but prices can get up into the hundreds of euros.

Despite the high number of tourists on Rhodes in the summer months, I would still highly recommend the island for a visit. In fact, because of Greece's dire economic situation now, prices have gone down and the island is not as crowded as many tourists are wary of going to a country on the brink of bankruptcy. The people of Rhodes will not disappoint you if you can go with a good dose of humor and not expecting everything to be perfect. If you actually read up on where you are going and what you are seeing, the trip will leave you impressed. Rhodes have an extremely rich history and is well worth immersing yourself in its story.