The Rooster Cogburn Ostrich Ranch is considered one of the best roadside attractions in the United States. The Ranch raises ostriches for their meat and sells to a few restaurants in Tucson. Some time back, they started letting the public feed the ostriches for a fee. The first time I went there, that seemed to be all they were doing. Their ranch has greatly expanded to include other animals, each of which the visitor may feed. Admission is $5, and the visitor gets a couple of cups full of animal feed, with instructions of what should be fed to which animals.

This lens is about my visit on Saint Patrick's Day, 2013. Of the different animals, the ones I most wanted to see were the lorikeets. But I enjoyed the other animals as well.

The lorikeets get nectar. I have no idea what is in it, but they sure like it!

The way the animals attack the food, you'd think they hadn't eaten in a week. That is demonstrably not true, because people are feeding them constantly. But it's fun that they are so eager to eat.

Miniature Sicilian Donkeys - These are an increasingly rare breed with about only 10,000 known still to exist. They will nuzzle pellets gently out of your hand.

Fallow Deer - A European breed that is well domesticated and disease resistant. They also nuzzle pellets.

Boer Goats - A South African breed, developed for their meat. They will open their mouths, curl their tongues, and move them rapidly, asking for food.

Ostriches - You are warned that the ostriches bite. They don't know any better. You have to put the pellets in a small tray, and you have to be careful how you do it. These ostriches are a South African breed. (When you read on the Ranch's web site, they have a FAQ section on ostriches. The stuff about ostriches being similar to dinosaurs is just a fairy tale. Ignore it.)

Prairie Dogs are a native Arizona species. They are rare these days. I saw far more prairie dogs here than I ever saw at the Desert Museum southwest of Tucson. They seem to have planned holes lined up, with concrete blocks at the entrance. I'd love to be able to see their warrens!

Rainbow Lorikeets are natives of Australia, eastern Indonesia, Papua New Guinea, New Caledonia, Solomon Islands and Vanuatu. They have brush-tipped tongues suitable for drinking fruit nectar. They are a type of parrot. They pair up for life, and the male will protect the female while she is eating.

The ducks are pure white. I didn't look at them for very long. Most such ducks are bred from Mallards.

They say ostrich meat tastes a lot like beef. I have eaten ground ostrich patties and they are delicious! I would hesitate to say they taste like beef, though. Not because they don't, but because I think the meat has its own unique flavor.

Nowadays, I would like to find out where I can get the meat. It is actually quite healthy, and indeed, because it is not CAFO farmed, that makes it even healthier. (Since I first wrote this lens, I have located a place where I can buy ostrich meat. I have some in my freezer as we speak.)

The web site, linked below, talks about the history of the ranch, and how the owners have been pioneers in raising ostriches for meat.

Do ostriches hide their heads in the sand? Go to the web site and find out!

Would you eat ostrich meat?

Would you, or have you, eaten ostrich meat?

This is one of the donkeys. It was difficult to get him to turn his head so I could take a picture of the side of his face. He wanted the feed so bad he would face me directly. I encountered the same problem with the donkey below.

I don't know if these are full size. But I am standing at normal height, and as you can see, he is not as tall as I am. I am looking down at him.

This time, I let someone else feed them and was able to get a side view of their faces that way. :)

Ostriches with Picacho Peak in the Background

The ranch is located close to the base of Picacho Peak. This little mountain formation is located about 50 miles northwest of Tucson, I'd guess. For those of you who are history buffs, this was the site of the westernmost battle of the Civil War. They have re-enactments every year.

Picacho Peak is also noted for having a difficult climbing trail that goes to the top of the peak, and for its blaze of California Poppy color in a year of good winter rain. The poppies are at the base of the mountains.

I have been up Hunter's Trail to the saddle, but declined to go any further. The rest of it looked treacherous, and requires you to climb uphill a ways on the way back, and I wasn't sure I'd have enough energy to do that. They provide a rope to hold onto for safety.

The flora around the peak is quite interesting. That was the place where I first saw Miner's Lettuce, which is a delicious salad plant. At that time, I didn't know it was edible, unfortunately, and it was several years before I found some after I knew. Nowadays, if I find some, I eat a few bites. I really like it, and it is nutritionally dense and gives me energy.

They liked the peanuts I gave them.

That was interesting. They knew exactly what the small cups of nectar were for. As soon as they saw you had one, they'd fly up and perch on your arm, your shoulder, your head. They weren't willing to wait for me to take the lid off. In fact, they knew exactly how to do it, and the next thing I knew, the lid was on the floor, and they were helping themselves. They were gentle, and it didn't hurt a bit for them to sit on my arm.

One teenage girl kept making startled noises whenever one landed on her. One landed in her head. She was willing to put up with it, but not without a lot of comments. The lorikeets were noisier, barely.

A sign on the wall warned visitors that lorikeets might relieve themselves on your hair or clothing. It said if they did, you would have good luck. I'm not so sure about that. Seems for them to let go like that is your first piece of BAD luck. Fortunately, none of them did anything to me.

But figuring out how to keep some kind of order as three or four lorikeets would try to shove their heads in to eat was a bit of a challenge. I think I need more practice!

Love the sense of humor that went into this, on the part of family members. French kiss an ostrich, and go ostrich fishing. :) 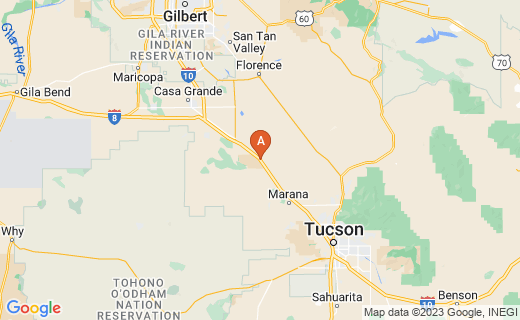 The first is the link to the Rooster Cogburn Ostrich Ranch web site.