It's hard to know where to begin when speaking about a trip to Havana, Cuba. If you are a photographer, amateur or professional, the minute you enter the country, you don't know where to point the lens. The fact that Cuba is an old country and that it has survived pretty much intact for as long as it has means the opportunities for fantastic pictures are nearly everywhere. "Stories" abound that can be told with the lens and a snap. And the Cuban people are happy to supply any details you might miss.

Cuba, officially the Republic of Cuba, is 500 years old and has been under Spanish rule, British rule and, for a brief period, was under the United States. Spain's King Felipe VI and his queen visited to celebrate the 500 year milestone.

Today, Cuba is under Communist rule and has been since the late 1950s.

When you enter first enter the Havana via ship, you truly step back in time because you enter at the oldest part of the city. As you venture further into the city, the further immersed in what feels like a time warp you become. The Spanish facade is nearly everywhere, with crumbling, yet, still beautiful buildings, awash in splashes of color against aging stone. The Spanish influence is especially prevalent in the architecture of beautiful Old Havana.

Listening to the lilt of the Spanish language adds to the very surreal feeling. We were able to secure our own guide and touring car. They are actually waiting on the Malecón Way to offer their assistance to tourists.Our guide spoke English, but our driver did not. Our guide told us that he, like many other Cubans, excitedly began to learn English when it was thought that tourism from the States was returning to the island and he acted as our translator in many instances.

Riding in a vintage, pink convertible - sans seat belt, wind whipping your hair - makes you feel giddy with a sense of unlimited freedom as you cruise along a highway that has very few other cars. Those cars you do see are also vintage with a few newer Russian model taxis or utility vans here and there. The cars alone, make and models of yesteryear, are the makeup of fantastic shots.

For the record, I used a Canon Rebel T6 for most of the pictures, especially the long distance shots. Some photos were taken using an iPhone. Take a moment to follow my path through Old Havana as the lens tell the story.

Many of the pictures are of Old Havana at night. We roamed the streets without thinking of being mugged or something worse. The people were just as friendly at night as they were in the day. On Malecón Way they talked to you as you watched the promenade of the vintage cars that made the nightly cruise along the Way.

There are lots of clubs with salsa dancing and cabarets. In other words, there is plenty of entertaining night life. Our friends went to a cabaret as we toured Old Havana.

For the record, Old Havana was just as spectacular and intriguing at night as it was during the day!

You can reach Cuba by air. Delta Airlines, for one, has a direct flight from Miami. At the moment, there is a different set of rules for visiting the country than when I went in 2018, but you still can visit the Caribbean's largest island. You need your passport and will be required to obtain a visa.

However, the country is currently experiencing another food shortage. That is unforturnate for the people who have endured a lot over the years. They still convey their spirit and sense of independence along with their extreme pride in their country and in their rich, colorful culture.

Change may eventually come to this island lost in time, but with it will be a loss of some of the charm that makes it such a unique photography opportunity. A specil loss will be that sense of being suspended in another time.

"Never go on trips with anyone you do not love." Ernest Hemingway, Cuba's adopted native son. 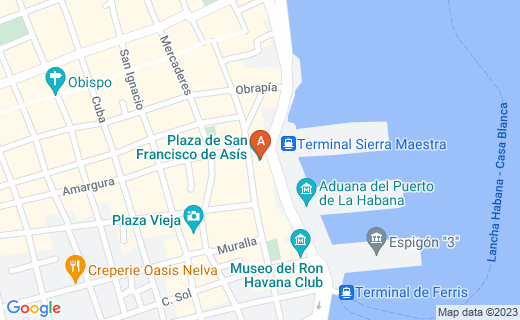 Plaza de San Francisco de Asis has been a popular gathering spot for tourists and locals since the Spanish traded in the square.

Even if you are an amateur photographer like me, there are a few tips you can use to enhance your photography skills.

1. Don't be afraid to try to capture people and places that interest you.

2. Mentally frame the shot in your mind and point your camera in that direction.

3. Photographers refer to the Rule of Thirds, meaning divide your framed shot into thirds and decide where to put your main focus or important elements when you compose your shot. If you have the capability on your phone camera or your DSLR, activate your grid. It is a useful tool to easily see your shot in thirds.

4. Shoot at sunrise or sunset (dawn or dusk) when you can better control the direction of the light. Lighting at other times of the day is not as focused coming from one direction versus another.

5. Edit your pictures. For those using the camera on your phone, there are apps that allow you to edit on your phone. If you are using your photos in your blogs, you can also edit your photos in various programs. Canva.com is a design program where you have the capabilty of edited your photo for use in your designs. Become familiar with the edit possibilities and be creative.

6. Don't be afraid to take pictures of the same landscape or items from different distances or angles. For example, Estatua de Cristo appears in a couple of shots in this article but from different viewpoints.

7. Take a few classes. There are great classes online that can help you improve your skills. Who knows? You may decide to start a new career.

8. Always have fun. Photos are a way to preserve memories and share experiences. You really can't go wrong if you take a few moments to frame that which interests you.

Thanks to photography, my trip to Havana, Cuba is well preserved.