Things to Do in Bruges, Belgium

I enjoy travelling and visiting new, interesting places whether they be near to home or abroad.

The Provincial Court in the Markt, Bruges

Bruges is a city in the Flemish region of Belgium. Historically an important, wealthy trading city (and possibly home to the world's first stock exhange), Bruges is now an extremely popular tourist destination, attracting approximately 2 million visitors every year. In this article I will share with you some of the sights of Bruges and recommend some places to visit in the city.

The Belfry in Bruges

So why visit Bruges? The main reason is to see the amazing Medieval architecture throughout the city. During the 13th to 15th centuries, due to its prominent position as a port in the middle of several trade routes, Bruges flourished and many grand buildings such as the City Hall, The Basilica of the Holy Blood and the Belfry were built throughout the city. However, during the 16th century, the waterways which had brought Bruges such wealth started to silt up and Bruges faded, its population poor and declining. It wasn't until the late 19th century that Bruges took off again, when it became recognised as a tourist destination. The city capitalised upon this and Bruges has now returned to prosperity.

Due to Bruges' economic difficulties throughout the Industrial age, the city didn't modernise in the same way many cities did and so retains its medieval look.

There are also many museums to visit within Bruges including the Historium, chip museum and chocolate museum.

Thinking of visiting Bruges? Then make sure you get yourself a good guidebook. This is the main one that I used on my visit and it pointed out some great things that I would have missed out on had I not read the book first, 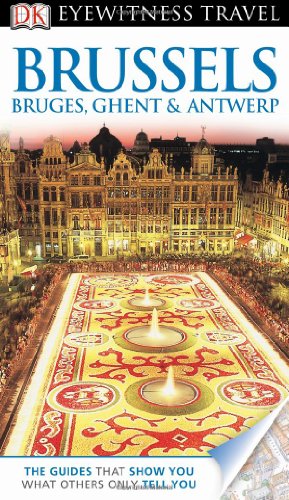 DK Eyewitness Travel Guide: Brussels, Bruges, Ghent & Antwerp
An excellent guide to the four main cities of Northern Belgium. This book comes complete with excellent city maps and colour diagrams of many of the main sights for each city.
Buy Now

Billed as an 'Experience Attraction', the Historium is a fantastic museum for all the family. Based around a day in the life of a young resident of Bruges, the Historium takes you back to 1435 showing you the sights, sounds and smells of 15th century Bruges.

I enjoyed the Historium so much because it is unlike any other museum I've ever been to. You are led through several rooms, all painstakingly decorated to suit the period, and in each room a scene is acted out courtesy of screens and your own headset (allowing you to listen to the scenes in your own language). For example, one room is the studio of Jan Van Eyck, the famous painter. You stand next to a very life-like sleeping model in one part of the studio and watch a scene through a doorway into the next room, where Van Eyck and his assistants are busy working on his latest masterpiece. It's fantastic.

Other rooms include the docks, with realistic snow; a tavern where two men are arguing out a business transaction; and the baths where you can actually smell the perfume.

At the end of the interactive tour, there are some more traditional parts with boards to read and exhibits to see, plus an outdoors balcony with a fantastic view of the Markt (market place).

There is also a bar within the museum selling excellent locally brewed beer.

Belgian Chips at the FrietMuseum

The chocolate museum and the chips museum

Ask anybody what Belgium is most famous for and two of the first things that come to mind are chocolate and chips. These museums are fantastic examples of Belgium's obsession with these two tasty items. If visiting both museums you can buy a combined ticket offering a slight reduction (you can also get a reduction off the lamp museum, situated in the same building as the chocolate museum).

The chocolate museum leads you from the early days of the Mayans and Aztecs using chocolate as a drink, through the Spanish invasions and the spread of chocolate's popularity throughout Europe, up to more recent times and Belgium's contribution to the chocolate market. At the end of the museum there is a demonstration of how to make praline chocolates (given in Flemish, French and English) followed by a sampling of some ready made pralines.

The chip museum starts off the history of the potato (as with chocolate, the story starts in South America) and leads you through the history of the chip and what makes Belgian chips so special (and believe me, they are special!). Entry to the potato museum gives you a money off voucher to use in the chip shop below the museum where you can sample Belgian chips cooked on the premises, as well as other items.

The photo is one I took of the chips we bought in the Frietmuseum, along with tubs of mayonnaise and Andalusian sauce.

Which of these is your favourite Belgian item of food/drink?

An art gallery containing Flemish and Belgian paintings, the Groeningemuseum is well worth a visit for anybody interested in art, particular Flemish art. Pieces range from 15th century paintings by Van Eyck and Bosch, up to 20th century pieces from Magritte and Khnopff.

My particular favourite was Jan Van Eyck's 'The Madonna with Canon Van der Paele' from 1436, the painting that the story in the Historium revolves around (see above).

Bruges and one of its canals

Other things to see in Bruges

There are many fantastic sights in Bruges and we spent a lot of our time just walking around exploring. There are several extremely grand churches and chapels, as well as the town hall and Provincial court buildings, and every street is packed full of antique buildings.

The canals are brilliant to walk along and there are many tour boats, complete with commentary, if you would prefer to see the city that way.

There are many interesting shops to look in selling all kinds of Belgian fare from chocolate to beer, lace to Tin Tin comics.

The image is my own photo of some buildings by the canal in Bruges.

Photos of Bruge - All photos in this gallery are my own.

I first came across the city of Bruges after watching this film starring Colin Farrell, Brendan Gleeson and Ralph Fiennes. It's funny, tragic and well worth a watch.

In Bruges
Showing some fantastic views of Bruges, this is a great film with fantastic performances from its three main stars.
Buy Now