Visit the Top 5 Château Gardens of the Loire Valley

After living in Paris for 3 years, my love of France developed into a passion. My holiday home there allows me to explore the whole country.

In truth almost all the châteaux and castles in the Loire Valley have beautiful gardens but most are visited primarily because of the château itself. Some of castle buildings, though, are almost outshone by their gardens especially if you're at all interested in plants and gardens.

It hasn't been easy to reduce the list to five but these are the ones I know and love. I've listed them in alphabetical order rather than try to rank them, because of course they each have their own particular appeal.

The photos are my own unless otherwise stated.

I have added links to each chateau under the individual sections rather than show opening hours or entrance fees because they are so subject to change.

Fairytale Castles in the Loire Valley - So Many Chateaux, So Little Time

There are so many beautiful châteaux to see in the Loire Valley, many of them very famous indeed. Unfortunately, with the fame come the crowds. This is especially so during the summer months. If you want to see the best known châteaux at the height of the season you'd be well advised to get there as soon after they open as possible.

Alternatively, you could opt to see some of the less well known châteaux. Very often they have made something more of an effort with their gardens and many of them are positively magical. I don't mean that the large chateaux don't have lovely gardens, they do, but people visit them primarily for the château itself [with one major exception and I'll be coming to that later]. The ones I want to take you to this time have put a lot of imagination into the outside grounds.

The picture above is of Château d' Ussé, the Sleeping Beauty Castle. I visited a few years ago and thought it was a shame they made so much of the Sleeping Beauty connection and had done so little with the gardens. I think they have been improved since.

The Château of Azay le Ferron

Azay le Ferron is more out of the way than many of the Loire Valley châteaux, being on the edge of the Brenne National Park. Its history dates back to the 13th century and it was owned privately until 1951 when it was bequeathed to the city of Tours.

I am particularly fond of this one because when we arrived, we were too late to tour the château itself, but the lady there suggested we paid for looking at the gardens. We were welcome to stay as long as we liked although there would be nobody around. She carefully showed us the way to get out and assured we were could return after lunch to see the inside if we still wanted to. There is nothing like a welcoming and helpful attitude to make you warm to a place.

The gardens are very large, laid out into an English style garden, a French garden, and with more formal areas closer to the château itself. There are winding pathways and discovery trails to lead you through the park. There is are gardens with roses dating back to the 17th century, vegetable gardens, 40 different varieties of grapes, orchards. Enough to while away the longest afternoon. You can even have a picnic there.

Photos From the Gardens of Azay le Ferron

Chamerolles was built by Louis XII's chamberlain in the 16th century. It still looks like a medieval fortress but it was designed to be a place of residence. It was at one time the centre of the Protestant religion.

During the Second World War it was occupied and looted. Afterwards it fell into disrepair, neglected and fell into ruins. Eventually in 1987, the département of Loiret bought it and spent 5 years repairing and restoring it.

The gardens were created during the Renaissance. There are six separate areas: herbs and spices, fruit orchards, vegetables, the ornamental garden, the labyrinth or maze, and finally rare plants from abroad.

The Château has recently developed its own site so you can find out more, opening hours and such, here.

La Chatonnière is a château that is still privately owned. The present owner's father, Manuel Gonzalez de Andia y Talleyrand Périgord, Duke of Dino, bought it in 1955 but it wasn't until 30 years later that Beatrice de Andia transformed the gardens.

There are twelve separate gardens in all which, when I saw it in 2007, were still being developed. The grassy area you see in the picture here is the Garden of Dance which bursts into wonderful displays of 40 thousand narcissi during the spring. In spite of the beautifully maintained gardens there is still an air of being a friendly and homely place.

We had no idea at all about this château before we visited but I happened to spot a signpost as we went by. What a very lucky chance visit that was.

Having twelve gardens seems a popular choice and here at Rivau we have another. The twelve areas are based on the images and stories brought to mind by fairy tales. So we have

Photos From the Fairytale Gardens of Rivau

The Château at Villandry

The one that can't be missed

I wonder if these are the best known gardens in the world? They are undoubtedly world famous and deservedly so. Not only is the chateau beautifully restored with more rooms being opened to the public all the time, but the gardens almost defy description.

I first visited Villandry nearly 30 years ago and was bowled over by the gardens then. They are constantly being improved, new sections opened, and the plantings change regularly so I make return visits whenever I can.

There are nine different sections to the grounds, each one a joy in its own right:

Their website gives much more detail, and is a delightful visit in itself.

How to Find These Châteaux and Plan Your Visits

As you can see from the map below of the Loire Valley and beyond, three of these chateaux are very close together, Rivau, La Chatonnière, and Villandry. It would be very easy to see these in a day unless you really do want to linger - and I can appreciate that you very well may. If you drive south from Paris using the A20, you will see Chamerolles signposted, so it would be worth a detour. Azay le Ferron is more out on its own but it's on the edge of the wildlife park, the Brenne, so you may be able to combine it with that. That would be very well worth it in my opinion. 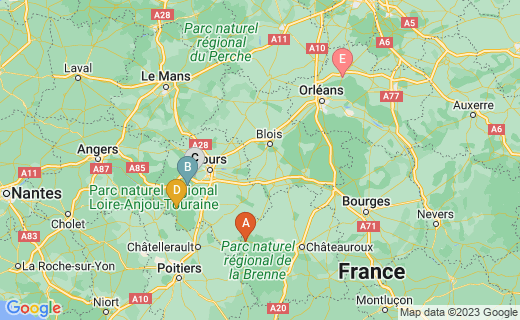 Two of the Above Gardens - Villandry and Rivau

I hope this article has given you a taste of what you can see by way of beautiful gardens in the Loire Valley, and maybe even help you plan a visit to France.