The Witch's Hut at Kildonan Park in Winnipeg, Manitoba

Visit the Witch's Hut at Kildonan Park in Winnipeg, Manitoba

Among the hundred year old elm's and the flower gardens, within the confines of Kildonan Park, in Winnipeg, Manitoba you will find the cultural jewel the Witch's Hut. The Witch's Hut serves to tell the story of Hansel and Gretel recorded by the legendary Brothers Grimm. It was officially opened in October 1970 and gifted to the children of the province by the German community of Manitoba.

Below find pictures, details, and links to further readings about the Winnipeg attraction the Witch's Hut.

To See or Not See the Witch's Hut - What do you think?

Have you seen the Witch's Hut in Winnipeg, Manitoba?

The Witch's Hut is a gift to the children of Manitoba.

Open from the May long weekend until Thanksgiving.

The Witch's Hut: A Child to Adult Prospective

Visit the Witch in Kildonan Park

I have had the opportunity to see the Witch's Hut both as a child and as an adult. In my childhood memories the Witch's Hut was an ominous place where a witch had locked away Hansel and Gretel. The outside creek with it's green hue summoned images of motes and dastardly dragons. I remember feeling that something could come down and scoop you up, or worse still, pull you down into the poisoned sludge without any one else noticing.

As an adult the Witch's hut was more of an educational experience as I learned about the creation of the Witch's Hut from a makeshift signage set at the entrance to the Witch's Hut. I walked up the stairs to visit the witch, far from terrorizing, and made of wax. The wax Gretel was cute with her bonnet. The gigantic spider on the wall, and the cat were humorous. As you travel back down to ground level you find Hansel locked away under the stairs in a caged prison. I admit seeing the "child" locked up in a cage was a little irksome; though, the outside was a tranquil area. The creek had a bench where you could sit and watch the ducks swim on the creek. In the distance you can see flowers, from the Kildonan Park gardens, in full bloom. It is a picturesque spot for a family to visit, a far cry, from my childhood memory.

The Witch's Hut surrounded by the beauty of a summer's day is a perfect gift for children as it is more than a visual representation of the Hansel and Gretel story but a place of wonder and magic for the children who visit. 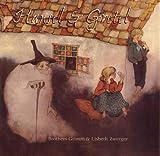 The Witch's Hut: The Story of Hansel and Gretel

The Brothers Grimm tell the tale of the two children of a poor woodcutter: Hansel and Gretel. When the woodcutter abandons his children in the woods after the insistence of his wife, the children's step-mother, the children are unable to find their way home as the breadcrumbs Hansel dropped had been gobbled up by birds. The two children come across a cottage made of chocolate, icing and nugget. The readily break off pieces of the house to feed their stomaches until the old woman, the witch, who lives there finds them and brings them inside. She places Hansel in a cage and tries to fatten him up so that he would make a tasty meal. The Witch enslaved Gretel as a domestic helper. Because the Witch's eyesight was so bad Gretel was able to keep her from eating Hansel by subsituting Hansel's finger for a chicken bone. Eventually, the Witch grew tired of waiting for Hansel to get fat and she sent Gretel to test the oven to see if it was hot enough to cook Hansel. Gretel came back saying she could not tell, so the witch went to the oven herself, and Gretel pushed her in. She freed her brother and for a few days the two children stayed at the witches place eating her home. One day they found some golden coins and were lucky enough to find their way home. Their father greeted them with tears, their stepmother was dead, and the two children gave the coins to their father. They were no longer poor.

Learn more about the complete Brothers Grimm version of Hansel and Gretel.

Hansel and Gretel: Innocent Children or Crafty Thieves? - Was the Witch to blame for her demise?

Considering Hansel and Gretel destroyed the witch's home would it not be reasonable for her to defend herself from intruders and only fair that the Witch make Hansel and Gretel work off their debts? Don't the later reveal their character when they murder the Witch, ransack her home, and steal her money?

Who do you think is the villain in the story of Hansel and Gretel?

Learn About The Brothers Grimm - Beyond the Witch's Hut

What Do You Think About the Witch's Hut in Winnipeg? - Will you visit?