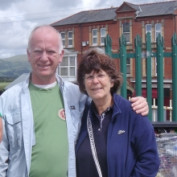 We are a team who enjoy writing about a variety of topics but mostly focused on History, including the King Richard III saga, and introducing people to the life and culture of Wales where we live. There are a selection of other singular topics for those who look for some variety. We hope you enjoy them as much as we have enjoyed writing them.

How to Build a Model Modern Footbridge in OO Gauge

Modern railway footbridge is very different from those found in the days of steam. Elevator towers are the biggest change, and they transformed the appearance. A footbridge is key on most model railway layouts.

I am continuing to create modern buildings for my 21st century modern model railway. Here is my next challenge: the ubiquitous coffee shop. Costa creates some of the best. I hope you enjoy reading.

A Guide to Collecting Thimbles

Thimbles are such a neat item to collect since they are small and readily available worldwide in souvenir shops. I hope you enjoy reading about them, and maybe start your own collection!

King Richard III - The King in the Car Park

The story of the rediscovery of the remains of King Richard III in a car park in Leicester. The first article in a series leading up to the reburial, 2nd funeral, reinterment of the plantagenet king.

Its often quite hard to identify butterflies so I have created this very easy to understand article with some photographs from my collection.

In this article, I building an OO gauge model of an ultra-modern waiting room on an island platform. This example is seen at Peterborough Station, UK.