A Beginner's Guide to Dog Obedience

A badly behaved dog can be bad for everyone involved, even the dog. Some people will need help from a trainer for their dog problems. But most people don't need to take your dog to the top dog obedience trainer in the country - they just need to recognize the basics of dog training.

Probably one of the most important things, and most difficult things to change, is our own behavior. Let's face it, when your dog misbehaves, it can be embarrassing and frustrating. Or sometimes our knee-jerk reaction is to over-react to the point of impropriety, or under react to the point that people will wonder if you care about your dog's behavior at all!

So what is the best way to react when your dog misbehaves? Keep calm, keep your head about you, and deal with the situation not just AS it comes up, but before it comes up.

What do I mean by that? It starts with recognizing what your dog's trigger is. For example, let's take dog-reactive dogs. These are dogs that will go insane the moment they see another dog. They rush to the window and bark like crazy. They dare to try and bite at another dog through a fence. They go berserk the second they see another dog.

Most people react to a situation like this by screaming at their dog, or yelling no, or fighting with their dog against the leash. I once saw an owner to screamed bloody murder while holding her dog, as though the dog's attempt to run after my dogs were killing her.

This type of behavior is not only, well, annoying to anyone else who has to hear it, but it excites the dog as well. Okay, you know your dog will react negatively to another dog. But screaming often excites the dog more and makes the behavior worse.

The idea is to nip it in the bud. The moment you see your dog's ears perk up in attention, or he goes running for the door, you need to take action. Calmly take action, that is.

For example, the first situation - barking at a window, calmly go over to the window and shut the curtains so that he cannot see. He may try to go under the curtains to look outside, but it's not your turn to try and get his attention in a calm and even demeanor. Reward him when his attention is fully on you and he is calmed down - be it by treat or by attention. Or reward him AFTER he has calmed down by opening the curtain again. The moment he reacts again, that curtain gets CLOSED.

So you have to be alert and calm - recognize a situation before it becomes a disaster. Take control by taking away (or taking his attention away from) his object of interest. Then reward him for either calming down or focusing calmly on you. And reinforce, reinforce, reinforce.

Changing your reaction to situations and making sure to reinforce positive behavior are essential in dog obedience training! You should not stand in your way. If another person lives with you and does not reinforce, then that's a whole other story...

There are many different methods of dog training out there. Some are more effective than others, and it’s important that you are comfortable with the training method you choose to use with your dog. Don’t overcomplicate things, either. Keep it short, and keep a general standard by which to live by so you don’t confuse your dog about when it’s okay to do something and when it isn’t.

An example would be that if your dog is constantly jumping on your guests, and you put him in another room until he’s calm. Repeat the process only every other time he jumps, he’ll never get the picture that jumping on someone is equal to being put alone in a room. It should be all the time, no ifs, ands, or buts.

Keep in mind that your dog is a dog first. He understands body language and tone, attention and lack thereof. Petting him when he’s whining or barking or doing bad things is just telling him that it’s okay. Using a soothing voice to try and calm him when he’s freaking out or yelping like crazy is just going to encourage him to do that more. Walking behind him while you two are on a walk only reminds him that he’s supposed to be leading the pack. It’s a very different language than what we are accustomed to. So remember that your efforts to calm a dog might just be perceived as a reward for what he’s doing.

While a dog is a dog first, he’s probably a breed second. My dog is a pointer/chow mix, and she shows it with her intensity when she’s “stalking her prey” with the squirrels in our backyard. Breeds came about because humans selected the qualities they were looking for, and bred for that. So your dog has a high possibility of having those annoying traits that the breed is known for, like the intense pursuit of prey in my dog’s genealogy.

Breeds can be a bad thing when training a dog, like the stubborn bulldog that won’t take no for an answer. But you can use it to your advantage in trying to figure out how best to communicate with your dog. If you have a collie, see if you have herding classes for dogs in your area so you can burn some of that energy. If you have a working dog, give it some work to do, like a back pack to carry during a walk. A dog that’s had his energy spent is a dog that will make obedience training for dogs a whole lot easier. 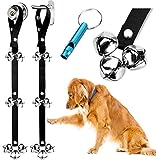 The Types of Dog Training

You’re going to find there are many choices when it comes to dog training and obedience. There is a reward system which only acknowledges and rewards a dog for doing a behavior you want, or there is a collar and leash method that corrects for bad behaviors. You’ll want to get with whatever method you are more comfortable with, but you’ll have to do your research first. Some methods will take more time and requires a greater commitment by you.

To give you an idea of the two types of training, we’ll use dog barking as an example.

With a rewards system, if your dog starts barking, you would immediately take him away from the situation or prevent him from viewing what he’s barking at. This would be accomplished if you’re on a walk by changing directions the moment the dog starts barking, and only going back to the source when he has gone quiet, and repeating as necessary. If you’re in an enclosed space, you might cover the window or whatever he sees the source of his barking through until he quiets down, then allow him to see what he’s barking at. The reward for being quiet, he will eventually understand, is being able to see what he’s barking at.

Another reward method would be to distract him the moment you see something he may bark at, and reward him with attention and treats while he’s not barking, so that he’ll understand that what he is barking at may be a good thing, and not want to bark at it anymore. Reward methods are a preferred method by many dog owners, but usually require more time commitment.

With a leash and collar method, you would use a dog training collar, the most common one being a choke chain. A choke chain is put high on the dogs neck, and when the dog begins to bark at something, the owner will give it a quick pop. This is a correction to the dog. If done correctly, this can be a very fast and effective method to control dog problems.

Many owners don’t like the idea of using choke chains or prong collars on dogs, but dogs use corrections with each other. In the wild, wolves will give each other corrections with a quick nip at the neck. As long as you use the collar correctly, not yanking or pulling, the dog should get the message.

If it still seems too intense for you, a collar like the Halti could be used like a horse’s bridle, taking the dogs attention away from something he’s barking at. Dogs have short attention spans, and if you have control of where he’s looking, you can have better control of how much he’s barking.

When to Use a Trainer

It is beneficial to have a trainer show you how to train your dog for feedback on how you are doing, and if you are doing it correctly. You can have training one on one or join a dog obedience school. Usually, the trainer has his own preferred method to work with, so make sure you are familiar with the method before asking for his assistance, as you might not like each other’s training methods.

Training one on one with a trainer can be expensive, but you get personalized attention all to yourself that entire time. Plus, the trainer will often come to your house, and can correct your behavior as well, as it might be encouraging the dog’s bad behavior.

If you enjoyed this article, try this one:

How do YOU react when your dog acts up?