I've been writing a lot about home security lately, including a recent hub about fake security cameras. I've even written elsewhere about measures you can take to secure your home and, in one of those articles, I mentioned the value of dogs as crime deterrents. I decided I should expand on that a bit here. Why? Because if you're counting on your cuddly pup to chase off a burglar, you might be in for an unpleasant surprise.

Dogs, of any size, do offer some value as part of a good home security package; the biggest benefit being that they make noise and criminals don't like any attention being called to their activity. But simply owning a pooch isn't any kind of guarantee. From a security perspective, simply owning a pet dog (pet as opposed to trained attack dog) is no more valuable than owning a security system you never turn on.

My life serves up a perfect example of how dogs can fail miserably as crime deterrents. The night of my first day of school in 9th grade, my home was burglarized while my family slept. While I slept soundly in my room, crooks broke into our home and stole electronic equipment and silverware with us none the wiser. Our two dogs (Yorkies) did nothing. Why? Because they were sound asleep in my father's room and equally oblivious to the break-in downstairs.

If you are counting on your dogs to alert you to a break-in, help them do their job by insisting they sleep on the main floor where a burglar would enter. They can't sound the alarm if they can't hear anything, after all. A burglar will know that you're home (assuming your car is in the driveway) and will promptly bolt once your dogs start barking because they know the noise will wake you. But what if you aren't home?

Tiny dogs add SOME value, but don't expect the world!

Expecting your dog to defend your home when you aren't there is a great way to set yourself up for disappointment and even tragic heartbreak. To a great degree, the type of dog you have will determine its value in protecting your property when you're away, but even the biggest, baddest mutt in the world isn't the insurance you might believe.

Criminals know that a small, yappy dog is likely a chronic barker whether somebody is trying to break into your home or not. Much like car alarms, your neighbors are desensitized to the sound so a burglar isn't going to be particularly worried that your Chihuahua's barking will bring the cavalry charging in. They'll likely just come on in and take what they want. As for the dog, they'll chase it into a room and close the door or, God forbid, kill it outright with a kick. The point here is that small dogs are best considered a small part of a complete security package rather than all the home security you'll ever need. They are worth something when you're home, but only marginally a deterrent when you aren't.

Larger dogs represent a much greater deterrent to criminals but you would be shocked at how many big dogs turn into welcoming teddy bears once a criminal is in your home. Unless your dog has acted aggressively towards guests, you'd be unwise to expect him to do so with a burglar. Likely he'll just bark, be chased into a room and locked in there while the crook goes about his business. If he's particularly good natured, he might even offer the nice burglar a tour of the house! Again, your best bet for home protection is to include other measures and only consider your dog a part of the complete home security system.

The take away from this should be that any dog, large or small, improves your protection to some lesser or greater degree but does not represent complete protection. For example, 100 criminals might feel comfortable robbing your house with no dog in it. Add in a small terrier and perhaps only 70-80 would still consider robbing the place. Throw in a Doberman and you might reduce that number to 50 or 60 even if he isn't blatantly aggressive. Replace the Doberman with any medium to large size dog that barks ferociously and flings slobber as it tries to get at the burglar and you reduce that number to 10-15 (and those guys are the kind who shoot first and ask questions later). The only dog you can depend on as a reasonably valuable crime deterrent is a large, trained security dog. All others (the cuddly pet kind) simply improve your safety but don't assure you of anything.

So, cut Fido some slack and don't put the weight of the world on his furry shoulders. He'll do his job the best he knows how but he (and you) will both sleep better if you take responsibility for your home security by including some additional, common sense security measures of which he can be a small and semi-useful part. 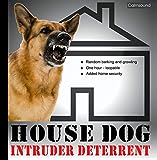 Ps… one of my dogs, Kiwi, is the slavering, drool-flinging, killer kind. Yes, that's really her in the picture. Apparently I was late with her breakfast that morning. She won't even sleep in a dog bed unless it's placed by the front door so she can continue diligently waiting for a meal… I mean burglar, to enter. I'm not kidding. Ask my former boss, who entered my home uninvited and still has a scar on his knee to prove it. I'd highly recommend any criminals skip my house. Woof! *growl, bark, grrr.*