The natural habitat of the California King Snake (Lampropeltis getula californiae) is, as its name indicates, the State of California, but also the Utah, Arizona, Nevada and even the North Texas area.

Very adaptable, these snakes can live in deserts, forests, woods, along rivers or farms.They can be found on elevations up to 2000m, but normaly are found up to 1000m.

The California King Snake is more active during the day in the colder regions. With high temperatures, this snake becomes more crepuscular and nocturnal. To signal distress, the snake can shake its tail rapidly, hissing, or curl up, hiding his head.

This snake is a constrictor (kills its prey by squeezing them), and is not poisonous, although it is mostly immune to the venom of some snakes.

The California King Snake reaches a significant size, between 110 and 150 cm. Has the same width throughout most of the body, the head being slightly wider than the neck. It is found in several colors. It is most commonly seen with alternating bands of black or brown with white or yellow.

A crossed out variation can be found on the south coast of California, with a white or yellow stripe that runs along the back of the snake. Another variation without lateral bands and stripes is also common in some parts of California.

They find their prey by sight, detecting prey movement, and smell, searching the ground, under rocks, and in shrubs. In the wild, the California King Snake feeds on turtle eggs, rodents, birds, lizards and other snakes like rattlesnakes, since this species is somewhat immune to their venom.

They also feed on snakes of the same species (cannibalism). From their ability to eat other comes their common name "King".

The California King Snake is an oviparous species. It lays approximately fifteen eggs in every clutch. The mating season runs from March to June and the female lays the eggs from May to August. About 6 to 10 weeks later the eggs hatch revealing young King Snakes that are 8 to 13 inches long.

Like most reptiles, the female does not take care of its young after they hatch. In the wild, usually the snake lays eggs once a year although it is possible that it happens twice a year.

This species is not globally threatened (by the International Union for Conservation of Nature). The main threat is habitat destruction.

My Other Hubs About Snakes

California King Snake as a pet

The California King Snake, is one of the snake species easier to maintain in captivity and is therefore recommended for beginners in the hobby. Its sturdy, has high tolerance to handling and there are plenty in the market, making it one of the most common colubrids found as an exotic pet.

But are its morphs and diversity of patterns that cause it to remain popular among the more experienced snake hobbyists.

The terrarium should be escape proof as these snakes will try to escape. When they are small they should kept in smaller cages to reduce the stress in the snake.

In the adult snakes the terrarium should be 100 x 50 x 50 cm. In it should be placed some hiding places and a trunk that allows for climbing. The trunks and other decorative objects should be securely fastened so they can not fall and hurt the snake.

Contrary to what one might think, it is possible to have a terrarium too large for a snake, since they feel unprotected in large spaces.

Paper towel is ideal when they are small, it is practical and safe for the snake. When adults can be used Bark Forest, humus, slivers of beech.

Normally the humidity should be aroud 40%. The humidity is very important at the time of shedding, so it will need be higher, should be about 50-60%.

The California King Snake is a little temperamental when young and small and will not think twice about biting if they feel threatened. In adult they become more calm and tolerate handling very well.

It is not advisable to keep more than one snake in the terrarium, as these snakes are known to eat other snakes whether or not the same species.

The food should be given every 5 to 7 to young snakes and every week to adults.

I hope you found this hub about the California King Snake interesting and helpful, if you enjoyed reading it you can vote it up, you can also share it with your friends.

Some items for your California King Snake 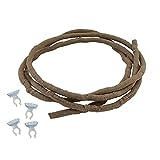