Dogs In Shelters: So Many Unwanted Dogs?

Why Do We Need Animal Shelters?

Mostly because people today don't have the same sense of responsibility that they once did. Life today is mostly about instant gratification and getting the most out of our lives; somewhere along the way though, a great many folks are missing the bigger picture.

There are so many cast-off pets in animal shelters today because people simply do not want to live up to the responsibility that led them to get the pets in the first place. I'm not saying that it is always the wrong decision; people who truly do not know how to care for pets should not have them. (Don't even get me started on children!) However, pets are not throwaways; they are not disposable. If people only took the time to think through what they plan to DO with a pet once they actually have it, I think our shelters would have fewer "guests." Of course, as a last resort, if a pet is being neglected and/or abused, it is far better to have them in a shelter rather than kept by an uncaring or inept owner.

Too often though, the dog that someone thought was going to be a great addition to the family turns out to not quite be so and off they go to a shelter or the pound. Although there are many no-kill shelters nowadays, the number is still staggering when you think of all the animals left there each and every day. Puppies born and dumped there, hoping that someone will take them; kitten upon kitten left the same way. I have always maintained that there are no bad dogs (or cats) but rather bad owners. If people took the time to live up to their commitments and honored those choices that they made of their own free will, I think we would find we had less animals to euthanize per year.

Yet Another Rescue Dog

This little girl was half starved and found somewhere in Eastern Washington. She had obviously been abused beyond belief because months later when we adopted her, she could not play, she could not walk on grass, and she was terrified of everything. She had also been starved half to death.

She was eventually placed in a humane society and someone from the Washington State Malamute Association who goes around checking at the different pounds for purebred dogs found her. She was scheduled to be put down that day as she was so emaciated and "ruined". They adopted her and sent her to "rehab" at someone's farm where it took four months for them to get her weight back on. Then she was put up for adoption and that's where I came in!

One look at her and I knew she was just right for my Kodi Angel above and thus began the saga of the malamutes. I have not one regret. I will say, however, that taking on a rescue dog that is as abused as Denaya was is the challenge of the century. I can only further say after 6 or 7 years though that she is the delight I knew she would be. She just needed someone to love her. To think that someone would have disposed of her is no less than staggering. We will never know how she came to be lost and alone but the fact remains that someone did not look out for her.

Kodi we raised from a pup. He was on his way to the pound as well. His life was obviously not as tumultuous as Denaya's had been, but together they were a miracle. Malamutes are often branded as difficult, stubborn, unpredictable, aggressive. I can vouch for the fact that they can be difficult, they can be stubborn; I'm not so sure about unpredictable because in my experience, they have been dead-on predictable! Aggressive, perhaps to the extent that they are not great with small animals but even that is predictable and if you work with them and make sure that you are responsible in what you allow and do not allow, I've never seen it to be a problem. Usually it is the other way around especially with dogs - we are much more apt to be attacked by small dogs with our dogs than our dogs out "cruising" for small dogs.

The Concept Of Shelter

Shelter conjures up the idea to protect I find it disheartening to think of so many animal shelters where the chief purpose is not a haven for an animal but a death sentence. There are just too many of our animals thrown away each year to go unnoticed.

A shelter is supposed to protect pets. I can only hope that all will eventually become no-kill shelters but especially in our sad economy, that seems rather idealistic. There are so many good people out there who rescue animals and take such good care of them and I can only say that I adore each and every one of them. Their devotion to a seemingly hopeless cause is amazing! I am banned from most shelters and rescue organizations by my husband as it seems that each and every time I go to one, we end up with at least 1 more dog. That is my paltry contribution to saving the dogs!

That being said, getting a dog from a shelter or rescue association is one of the most gratifying experiences of a lifetime because that dog will love you forever; no questions asked. Not to say that it will not be a difficult transition sometimes. In Denaya's case, it took several years to get her to trust again. That is indeed sad but then on the other hand, the joy that that fact alone gives me was worth all that effort! There are literally hundreds of rescue organizations all over that are simply brimming with dogs.

To help in the healing of a dog (or anything) is the best gift I think you can give yourself! I say a silent prayer or two from time to time when I look at the dogs on the rescue websites (no one can stop me from looking); first, I hope and pray that they find someone just right for them that makes it all okay. Secondly, I pray that there is some justice in the world and that somehow the people who dump or abuse a dog (or any animal or child) eventually has that karma come around full circle. There are some mitigating circumstances I know that do cause people to have to get rid of a dog or a pet but so many are just taken to a shelter as a means of taking the easy way out. That needs to be changed somehow. We should be accountable for all of our actions in all things, including taking a pet into our lives.

At the very least, I mention to people all the time who are considering giving away a pet, there are other options. Finding a decent home for a dog that you have spoken for seems fairer than seeing a dog sent to a shelter and possibly being euthanized. I think of the adage of treating others as you would be treated and even in the case of a dog, it applies! Some of my best friends are of the canine variety!

It's Not The Dogs 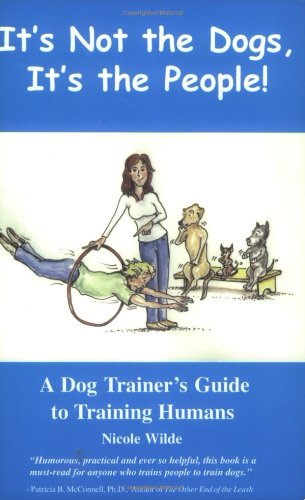 It's Not the Dogs, It's the People! A Dog Trainer's Guide to Training Humans
Buy Now

Links for Books on Rescue Dogs