All the Pups are Resting with Their Mommies

Beached Walruses Since The Great Depression

In 1938, the first mention by US government agencies was made about large herds of walruses climbing out of the Beaufort, Bering, and Chukchi Seas around Alaska. These marine mammals climbed out onto the land to rest, and even into the Tundra grasses, because of the large number of Walruses in the herd. They were also tightly packed together because they like company, while the adults protect the smaller pups.

This pinniped (flipper footed) beaching was in August and September of a Great Depression year, 35 years after the Wright Brothers' aviation businesses in Ohio began America's commercial, government, and war ramp ups in manned flight. Henry Ford soon followed with the first commercial airport in the US, but these types of businesses also began in Europe around 1905. As they expanded, they placed an increasing demand on natural resources and pumped increasing amounts of pollution into the air.

Global warming and -cooling were not in the news of 1938, but the Aviation and Aerospace Industry, as part of the Industrial Industrial Revolution, would be blamed partially for global climate change in the future.

Did the overall climate change cause the

Some government environmentalists say yes, other scientists say no.

Climate change was not blamed for the massive walrus haul outs of 1972 and 1978, even though Earth Day was initiated in 1970, followed by expansion of sustainability campaigns that reached a height in the 2010s.

No one heard anything about the Native Alaskans and Native Chukchi peoples, all nicknamed Eskimos, who helped the walruses for hundreds of years or more - not until a 2014 media blitz about a large - but not the largest ever - haul out at Point Lay, North Slope, Alaska. The media seized upon it as an interesting story and proof of global warming.

Tens of thousands of walruses, often more than in Alaska, haul out onto the Arctic shores of Russia annually, as they have done for thousands of years.

Anadyr, Capital of Chukotka on the Chukchi Sea

Usual walrus rest stops in Russia include Ryrkarpiy, Vankarem, and Cape Serdtse-Kamen, all found on the Chukotka Peninsula at the Bering Strait. Russian herd haul-outs have always been much larger than those of the US State of Alaska.

In the map below, the dotted line you see runs through the Chukchi Sea, where Pacific walruses gather for the summer. They dive beneath the surface to eat mussels, clams, snails, and other sea life and then haul out onto ice floes to rest. If there is not enough ice, then they haul out onto land.

Mothers and pups haul out at specific locations and males haul out at others, except for a few males that haul out with the females.

Haul Out Highlight Points Around the Chukchi Sea 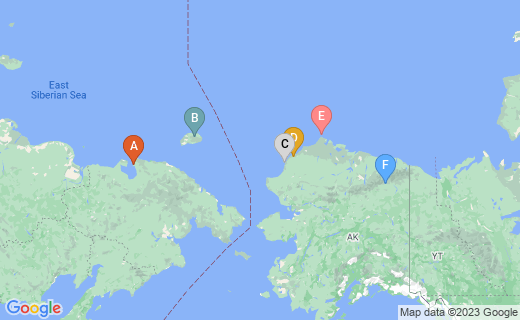 In September - October, 35,000 walruses rested at once on the shores at Point Lay.

The northernmost point in the United States and 300 miles northeast of Point Lay, Alaska.

Even though US scientists have not always counted walruses in Alaskan haul outs on land, Alaskan Natives and their related peoples on both sides of the Bering Strait have done so since at least 1910. 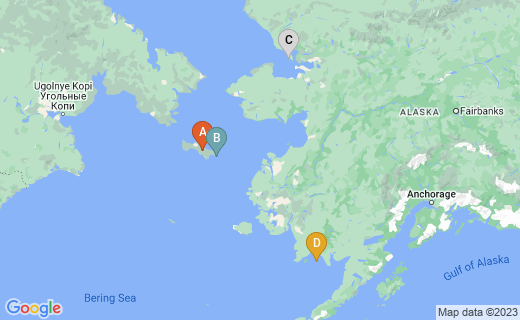 Haul out of males every year.

Walrus numbers are up considerably from the 1960s, because hunting regulations were tightened to limited wasteful hunting and over hunting.

The largest haul outs on land were back in 1978.

So many walruses existed, that they hurt each other in hauling out and occasional stampeding. They also were undernourished, according to Indigenous hunters in the region.

References for data presented in the above Tables I and II.

Dr. Crockford is a zoologist and adjunct professor atone of my favorite schools - the University of Victoria, British Columbia. She has amassed over 35 years of related experience with marine mammals, especially Arctic fauna, including the polar bear. Her own company is like that of TV's BONES, only for animals and she owns Pacific Identifications Inc. with two colleagues.

This study was done with support form the US Bureau of Land Management and the National Oceanic and Atmospheric Administration. The area examined was under examination for petroleum development as well.

Besides larger walrus haul outs onto land in North Slope, Alaska, increased ice melt and shoreline erosion together have forced several villages of Native Alaskan hunters and fishermen to move 40 miles inland since 2000. The Inuit Circumpolar Council of Arctic peoples has stated that climate change can be a threat to their human rights.

Who are the people of Kali, the Village of the Mound, or Point Lay in English?

These Native Alaskans are the last small group of Indigenous Iñupiaq-language speaking Inupiat people who were nearly wiped out by industrialized whaling in 1060, when they were down to just two residents. People began to return to the village and by 2014, numbered around 280. The village has moved inland from a barrier island, because of shoreline erosion.

The Kuukpaagruk have always kept an eye on Pacific walruses and the animals' land haul outs, because the walrus is one that they hunt for a living, but also one they protect.

The people adopted a herd of tens of thousands of beached walruses at their village in September 2014. They stated that they would not disturb the haul out of resting animals, because disturbances can harm or kill them by causing stampedes. In addition, the people work with local aviation authorities to reroute airplanes to fly around the herd when it hauls out onto land.

When asked by the media for interviews, the Kuukpaagruk politely declined, stating that they were too busy protecting the herd and hunting elsewhere on Alaska's northwest coast for their livelihood.

This subsistence livelihood comprises seals, Pacific walruses, polar bear, whales, caribou, fish, and other wildlife. The people have shown a history of refraining from over hunting.

Descendants of the Thule People

The Kuukpaagruk match as DNA descendants of the Thules, who migrated from the Chukchi and Bering Sea islands and the Maritime Provinces of Canada to Alaska, Greenland, and Iceland, completing a full circle of Naïve American DNA markers around the Arctic Circle.

Matching DNA markers have been traced to groups like the Saami of Northern Europe and groups of Indigenous Peoples in Siberian and adjacent Northern Asian and East Asian areas. Another matching element is the artistic and cultural carved cedar pole ("totem pole") found on both sides of the Bering Strait well before 1700 AD or CE.

Land of Extremes: A Natural History of the Arctic North Slope of Alaska
Buy Now

Any disturbance of walruses and other marine mammals in USA waters is a violation of the Marine Mammal Protection Act (MMPA). Alaska Natives may hunt marine mammals for subsistence purposes, and may possess, transport, and sell marine mammal parts and products.

The Walruses of the Pacific Ocean

The Pacific Walrus (Odobenus rosmarus divergens) is managed by the DOI (US Department of the Interior), along with a few additional Alaskan marine mammals. The DOI also oversees the Bureau of Indian Affairs.

The US Geological Survey or USGS, began attaching satellite radio tracking tags to the thickest skin of the walrus backs around 2008, possibly earlier, in order to observe changes in patterns of migration, feeding, and other behaviors with respect to the decline of sea ice in the Arctic waters.

Making some people cringe, the radio tags are shot into the heavy hides with a very lightweight crossbow. This seems cruel. However, the hides covering the backs of these animals are said to be so think that it sound to me that the arrow feels much as if it were a tiny pin stuck into your heavy winter coat, which seems as if you would not feel it. At the same time, video footage shows walruses jerking in alarm as they are hit (please see USGS footage below).

Regardless, as of October 3, 2014 the walruses hauled out in a few more land locations than they did in 2013. Ice-melt season is generally August through September and this a cause of haul outs on land instead of ice. Other suspected causes have been petroleum operations, underwater nuclear testing, disease, and some others.

The year 2014 did not see the largest Pacific Walrus land haul out by far, especially when compared with that of 1978. Several more years of observations may clear up questions of related cause and effect.

The yellow tracks on the map above show where Pacific Walrus groups have moved. The red X's indicate haul-outs and related radio-tracking device implementation on ice and land.