The Edison Institute and the Henry Ford Museum

The Edison Institute is more readily recognizable as the Henry Ford Museum and Greenfield Village, adjacent to an Automotive Hall of Fame and the old Ford Airport grounds. The complex comprises the largest indoor-outdoor museum of the United States to date, located in the Detroit suburb of Dearborn, Michigan. It is one of my favorite stops in Michigan and I recommend who enjoys history and inventions.

Visit the 18th through 21st Centuries

The museum complex has been voted one of the 100 Greatest Places to Stand in the USA, as Number 29, because there is so MUCH to stand on! The contest was sponsored in 2009 by the web site StoodThere.com, looking for the most thought-provoking and fun places inthe US for photography and other activities.

On my first visit to the Henry Ford during a junior high summer, I felt that it was a large museum. Today, the museum and village contain a greater number of interesting displays, exhibits, deomonstrations, and family friendly activities. It even has a giant IMAX movie theater that was not present on my first visit.

One recollection of the Henry Ford I have is first seeing the exhibit of the limousine that carried President John F. Kennedy in Dallas in November 1963. I had expected larger vehicle and it looked small to me, even as a child. The car also looked brand new and I learned later that damages had been quickly repaired back in 1963 - fodder for conspiracy theorists, certainly. regardless, seeing the vehicle up close was surreal.

Returning to the museum complex as an adult for a business conference, I was stopped frozen in my tracks as I turned a corner and saw what appeared to be my mother's 1960s kitchen as a museum display!

The Henry Ford Museum likes to follow history right up to the present time. I think they might have been a contender for a retired US Space Shuttle Orbiter, had they applied to possess one. Its addition would have expanded the display continuum of historic bicycles, Ford Models A and T, an Edsel, the Wright Flyer, and more advanced technologies - all on exhibit at the Henry Ford Museum and Greenfield Village. Altogether, the complex began huge Center for Science and Industry, before there were such places - and arts and culture are included. 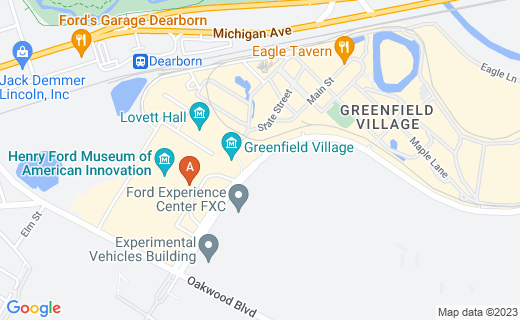 In 2011, the automotive history exhibit at the Henry Ford began reconstruction, though the vehicles in the large display appears around the museum for visitors to enjoy (see the Henry Ford Blog). I always look for a Model A Ford of the type my father and his siblings drove all the way to Colorado from Ohio one summer.

Cutting to a vehicle from 1965, the Goldenrod on display broke the land speed record that year at the famous Bonneville Salt Flats: 409.277 miles per hour. Looking like a grounded space vehicle, it is 32 feet long and the only car of its make and model. A financial grant allowed the Henry Ford to have it completely restored for historical display.

I was in Michigan when the Rosa Parks Bus was touring and placed finally at the Henry Ford Museum. A lot of work had been put toward finding the exact bus on which Rosa Parks was arrested because she was too tired to give up her seat to a white man again. Forensics experts and others documented that the bus was authentic, having found it in a field in Alabama. Much more work went into restoring the rusted bus, but a financial grant assured its restoration and permanent display at the Henry Ford.

The bus is part of a larger exhibit called With Liberty and Justice for All . In this exhibit, the Rosa Parks Bus joins the chair in which Abraham Lincoln sat as he was shot at Ford's theater and George Washington's camp bed, which folds out of a large chest. The installation equate Rosa Parks's contribution to American histoy with that of the great presidents; although I don't think she would have enjoyed this sort of attention.

House of the Future

Our own Ohio State Fair has featured a futuristic all-electric solar powered Home of Tomorrow for decades, but the dwelling at the Henry Ford looks like home from a sci-fi film or series. On my last visit, it was furnished in retro 1940s - 1960s fashion. Constructed of aluminum, the house is also called the Dymaxion House and was owned by architect R. Buckminster Fuller. Since its alloy was used in aircraft already, he felt that it would stand up to a prairie tornado! I wonder what Frank Lloyd Wright would have thought if it?

The Henry Ford holds more than can be seen in one day or featured in one Hub, so go and visit if you are near Michigan. From clocks to Thomas Edison's laboratory, to new inventions and ancient typewriters; and aircraft to futuristic developments, you'll find something you will want to photograph. Greenfield Village is a working village with re-enactors that includes the Wright Brother's Bicycle Shop. Interestingly, in the Dayton OH aviation district, we have a replica of the shop, rather than the original.

You might also enjoy a related tour of the nearby Ford Rouge Factory and its green roof that is covered with plants to conserve costs and energy. Not only that, but it also helps cool, lowering air conditioning costs. Yet another installation, Benson Research area, has gathered interesting materials from Henry Ford's life for the public to enjoy.

To date, the Automotive Hall of Fame near the museum is the only international hall of fame that celebrates motor vehicles.

Inductees include people such as celebrated auto design engineers, auto racing stars and investing pioneers, industrialists like Henry Ford, and many others. The Hall of Fame is at the norwest corner of the museum complex grounds.

Just off the southeast corner of the grounds is the birthplace of Henry Ford, now a landscaped park with free admission to view the gounds and historic markers.

To the east of Greenfield Village is the old Ford Airport.

This historic airport is no longer used as such, having operated from 1924 - 1947. it was the site of both an airport and an airplane factory and ran until after WII. Today, it is used as part of the Ford Motor Company Proving Grounds as as the Ford Test Track for testing new vehicles. The property reveals quite a history.

Henry Ford was responsible for opening the first airport that accepted regularly scheduled commercial air travelers at the first passenger air terminal. He also instituted the concept of the "airport hotel", of which there are now thousands. he also had the first contracted US Airmail. The system of airports around America in the 21st Century is considered to have arisen from the success of Ford Airport before WWII.

The Ford Airport complex is registered as a US National Historic Landmark.

Naked Airport: A Cultural History of the World's Most Revolutionary Structure
Buy Now

Fair Lane - The Estate That Named a Car 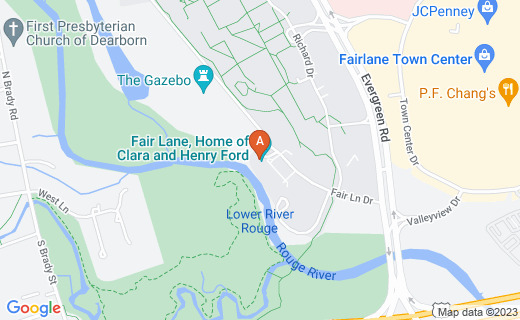 As a suburb of Detriot MI, Dearborn enjoys the good news of an influx of businesses and jobs that brought the total for the Dearborn area up to over 49,800 job listings in early July 2011. The top job search and trending organization Indeed.com says, "The Dearborn, MI job market is strong compared to the rest of the US." SimplyHired.com agrees. Ford Motor Company HQ is located in Dearborn and automotive jobs are on the rise.

Automotive job titles - especially various Engineers - are on the increase again in this Motown region, with Arts and Entertainment rejuvenating through the efforts of industrious people like actor-producer Sean H. Robertson and the WowShane Radio Show hosted by Shane Carson. They are gathering forces among the performing, fine, and cultural arts community to revitalize Detroit and its suburbs. Since film industry credits were eliminated by the state, other funding soruces were found by these individuals almost immediately.

A quote from Sean: Don't envy. Emulate. Don't be jealous. Be inspired. What's possible for anyone, is possible for you. Make it happen.

Teaching K-12 and Other Jobs at the Henry Ford

The complex deals in vacation travel packages and a number of tours among its various facilities, including events in nearby Detroit. Many of the jobs available with the complex are related to Travel and Tourism. These are guest services, dining, sales and related positions. Other jobs involve management, finance/grants, conservation, science, clerical, maintainence, research and development, and teaching at the Henry Ford Academy Charter School. Teachers are needed for each school year.

Resumes and can be sent by FAX, email, or on the website and an Employment Hotline is updated regularly.

Largest Michigan Employers In the Area