The Many Names of a Cat

When choosing a name for any pet, people vary with their preferences and techniques. Basically how they go about it varies. This is why it's suggested to pick many names and then to make a list of favorites. This isn't for us, the owners' sakes, however. This is because our pet may not respond to the name we've chosen.

For instance, Prince Fredward's initial name was Snowball. It was the consequence of my cousin allowing her 5-year-old daughter to name him herself.

Katie, at 5, felt that because the cat was white, and because snow was also white, it was a perfect match. We all agreed with her at the time.

The cat, however, did not. It was more of an extra thing in the house than a pet.

The Cat From Hell

"Snowball" turned out to be more energetic than either my cousin Krystal or her daughter Katie could handle. Other than not responding to his name, he was constantly vying for attention (but in aggressive ways), and there was a certain time each night where he seemed to go insane and would just race around the house. He'd bound up the stairs, meow long and loud at the top, and then run around on the second floor for a couple minutes before running back to the first floor and repeating the process.

The cat was seemingly possessed. He would let you pet him, sure. If he decided it was okay. But he bit for no apparent reason, and the bites were hard. Because he was not fixed, he sprayed the house left and right, and neither Krystal nor my mom wanted to deal with it anymore.

At the time that Krystal and Katie got him, they were living with our grandfather. When an opportunity arose for Krystal to move back to Texas, she took it. They decided to leave the cat behind.

Pop-Pop agreed to it because his cat Tiger had just passed away. Little did he know "Snowball" would get worse.

Throughout the next couple of years, we gave up on what Katie had initially named the cat. He was a monster, and that was all we knew. When I visited with my mother and sister, we tried to avoid him except to make sure he had food and water.

He avoided us as well, for the most part. If we were sitting in the living room, the cat would sneak in one moment, then dart out howling the next. He would then bound back into the living room at full speed. Needless to say, none of us liked to have him close, and I was the only one who would coax him over to try and pet him.

I am sure the cat knew by the tones of our voices that we either weren't serious or that we held so much disdain for him that it wouldn't matter what we called him. It had to be even more confusing that we never stuck with one word.

Pop-Pop had simply reverted to calling him "Cat." A bit unoriginal, but it was the first thing the cat would actually respond to. It helped that Pop-Pop was at least consistent with what he was calling his pet, and also with the tones he used.

Tell Me About Your Pet-Naming Habits!

Do you have a method for what you name your pets?

"Cat" was 3 years old by the time Pop-Pop could no longer take care of himself. They both moved in with us at my parents' home. It was apparent soon after that we did not have the training or the patience to take care of my grandfather ourselves, and he had moved into a lovely nursing home 6 months later.

Again, the cat was left behind. We'd gotten him fixed by that point, thank God. He no longer sprayed, and the operation had calmed him down tremendously. It was now only occasionally that he darted about the house in insane races. It seemed to always be around 8 PM. 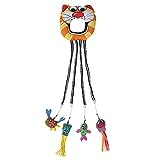 FAT CAT Catfisher Doorknob Hanger
I love this one. Hang it on a doorknob, and keep your cat occupied with many different options!
Buy Now

And it was as if by a light bulb flickering on that we realized, well duh! The cat was bored.This was why he constantly stalked the dog and swatted at her stub of a tail. This was why he ran around in circles to expel his energy. This led us to finally try and figure out ways we could actually interact with our monster cat wonder.

We bought Cat fake mouse toys with catnip in the middle. We gave him a scratching post and kept it in the middle of the floor. We even tied strings to different areas of the house so he could mess around with them. Cat had the worst case of cat ADHD we'd ever seen, so we were glad to have many different items and areas for him to play with.

He Picks The Name

With our continued interaction, Cat settled into a routine. It turned out that he liked routines. In fact, if we didn't check his food dish at the same times each day, he would meow and remind us. I firmly believe that the routine is what calmed him down the most, but my sister has another story. She believes it's the fact that he needed a name.

She and her boyfriend at the time had been really upset that Cat had been living with us for almost a year, and we were still going "here, Kitty kitty" because we had no name for him. Together, my sister and her boyfriend decided on "Fredward."

I'm not too sure where this name came from, but I learned later that Freddie from iCarly is actually named Fredward. Maybe my sister and her boyfriend watched Nickelodeon more than we thought!

Fredward immediately latched onto this name. It stuck because I would say "Fredward," and he would perk his ears. If I clicked my tongue along with saying the name, he would immediately give a cute little noise and come running.

Success! We had trained our cat!

Well, not really. But simply coming up with a name and being consistent with what we call our pet made a huge difference. Perhaps it wasn't just the routine, or just the name then, that calmed Fredward down. Perhaps it was a combination of both.

But What About His Royalty?

The movie Enchanted, with Amy Adams and Patrick Dempsey, had just come out. What else do fairy tales have if not magic, princesses, and princes?

Turns out, the prince in this film was Prince Edward. When I first saw it, I was home alone. I cuddled on the couch with my blanket and a bowl of popcorn. Fredward had jumped up to lie down next to me, and I had the volume up.

Every time someone said "Edward," Fredward's ears would prick. He would turn to glare at the TV as if appalled that he'd been tricked yet again. It was obvious what I had to do. Fredward was dubbed Prince Fredward from that point on.

What's In A Name?

Turns out, it matters quite a lot. A name is the distinction between an owned cat and a stray. It is the difference between routine and chaos. Naming a pet should always be number one on the list of how to care for him or her. It should be picked for life. Don't do what we did and change a cat's name later on.

Once the repeated word is used in different tones based on whether the animal has been bad or good, and once the word has been used enough to have your animal answer back, then you know that you have succeeded in beginning to the training processes. Everything comes after this (or it should, anyway).

How Does Prince Fredward Act Today?

Today Prince Fredward is 13 years old. He is a lazy fat cat, and I love him that way. He mostly lounges wherever I am, whether it's in bed or on the couch. If it's a nice day, he will spend most of his time in a window watching birds and neighbor cats. He is still very vocal, but he rarely gets bored with how often I play with him, and most importantly, he knows what his name is.

Other Animal Articles by meisjunk