Is this the face only a mother could love?

"Do you think God gets stoned? I think so ... look at the platypus!" - Robin Williams

I've never seen a platypus. I may not ever see one. But I can state without a fuss. I'd rather see than be one.

You have probably never seen a platypus in a zoo, because most zoos don't have them. But they do exist in eastern Australia including Tasmania. They are unique mammals who lay eggs instead of giving birth to live baby platypusses - or is it platypusi? (That reminds me of the old joke about a zookeeper who wanted to order two of these animals but didn’t know how to phrase the plural form in his request. So he sent a letter to the platypus breeder and stated: “Please send me a platypus. And by the way, send me another.”

The platypus (Greek for flat foot) is also called the duckbill and belongs to the most primitive group of living mammals (Ornithorhynchus anatinus meaning duck-like). The echidna or spiny anteater is the only other egg-laying mammal.

The platypus is weird not just because it is a mammal who lays eggs, but because of its bizarre appearance. Imagine a small animal that weighs about four pounds with its head, body and tail broad and flattened, and covered in thick, dark brown fur. But its snout looks like a soft, rubber-like duckbill and it has no teeth - just ridges used for crushing food. It has tiny eyes and no external ears.

The five-toed feet of the platypus are webbed like a duck but here is a fact you may not know. The male platypus has a hollow spur on his heel that is connected to a poison-secreting gland. The female has this spur, too, but it falls off within her first year. How venomous is the platypus' poison? It can kill small animals including dogs. The poison is only produced during breeding season so scientists believe it may be used for males to assert dominance over one another.

The female platypus is weird in another way - she does not possess nipples so in order to feed her young she secretes milk through pores in her skin. The milk collects in grooves on her abdomen where the babies can lap it up.

The platypus makes its home on the banks of streams, lakes and swamps and it possesses a special talent for catching prey. There are electro-receptors in the skin of its "duck-bill" that help it to locate fish and other prey while it is under water.

It needs all the help it can get because the platypus closes its eyes, ears and nose completely while it is digging around in the bottom of the stream for its dinner. They can hold their breath only for about half a minute so they store what they catch in cheek pouches (like chipmunks) until they can dine on the surface or land.

Animals are fascinating - probably because we all are animals, human animals. If you enjoy reading about weird animals, please check out my other "weird" animal hubs.

© Copyright BJ Rakow 2011. All rights reserved. Author, "Much of What You Know about Job Search Just Ain't So ." 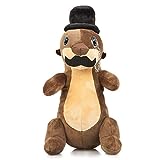