What Dogs Have Separation Anxiety?

What Predisposes a Dog to Separation Anxiety?

What dogs get separation anxiety? If you ever owned a dog that was affected by separation anxiety, you know for a fact how miserable life can be along with a dog suffering from this condition. If you're looking for a new dog, you may be worried about getting another dog with a similar issue. While virtually almost any dog can be affected, there are some types of dogs that can be more predisposed to this debilitating condition. Of course, as with anything dog-related, no black and white statements can be made, so please take the below list of types of dogs more predisposed to this condition with a grain of salt.

Generally, speaking nature and nurture can both contribute to separation anxiety. On one hand, it can be genetic, stemming in breeds with a history of being selectively bred to work alongside humans. However, often it has a learned component, where the dog either due to some form of trauma or abrupt changes in his environment, develops a dysfunctional attachment to the owner and develops the canine equivalent of a panic attack when the dog leaves. In the next paragraph, we will go over some types of dogs that are more likely to get separation anxiety. 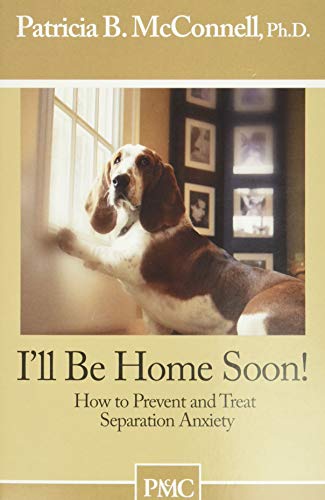 I'll be Home Soon: How to Prevent and Treat Separation Anxiety.
Buy Now

So What Dogs Develop Separation Anxiety?

In this paragraph, we will go over both genetics and learned behaviors that are contributing factors to separation anxiety. As mentioned previously, not all dogs listed here develop separation anxiety; this is just a general guide on predisposing factors.

In this case, we are tackling traits that are genetically wired in doggie DNA. However, often there's also a learned experience at play. As with other behavioral problems stemming from genetics, often these predispositions can be overridden with behavior modification.

Working breeds, as mentioned, were selectively bred to work alongside man. Many started their day with their masters and then fell asleep in the evening by a crackling fire. They were probably rarely separated by their masters, working as a team for a good part of the day. A breed with a strong reputation for developing separation anxiety is the Weimaraner. Many Weims are called Shadow and this isn't only for their grayish/blue coat. It's often because these dogs follow their owners around like a shadow.

However, this doesn't apply to all working dgs. Livestock guardian dogs, for instance, were bred to guard livestock and were raised among herds of sheep and other animals. They were raised to live independently from humans and as such, it's quite rare to see a Great Pyrenees or an Anatolian shepherd suffer from separation anxiety.

In this case, the behavior of getting anxious is learned through a life experience. However, often there is a genetic component at play as well. Following are some possible scenarios that may cause separation anxiety to raise its ugly head.

In this case, the dog is subjected to sudden loneliness after habituating to human companionship. Often, this is seen when owners who work at home or are ill or laid off for quite some time and then suddenly start working out of the home, or when the summer vacation is over and suddenly school starts, and the kids are back to school and the owners go back to work. Also this is seen in dogs used to being around people a lot such as show dogs retired from showing and retired greyhounds.

At times, something traumatic happening when the dog is left alone can trigger fear. An airplane flying low, a gardener showing up unexpectedly in the yard or a loud noise can be scary when the owners are away and not able to provide reassurance. Dogs with a history of being mistreated or neglecting may be predisposed, and so are puppies that have been separated from their litter mates and mom too early. Excessive isolation, during the critical stages of development, when the pups should be socialized, can create clingy, overdependent behaviors that may develop in a dysfunctional attachment to the owner. Dr. Nicholas Dodman talks about this in his book " "The Dog Who Loved Too Much" (Bantam Books, April 1996)

Also, it's a common myth that dogs who are allowed to sleep in bed with their owners or follow their owners everywhere will develop separation anxiety. It's true though that if your dog has already separation anxiety it's not a bad idea to teach your dog to tolerate brief absences and learn to sleep on its own bed to instill more independence. After all, how can a dog learn to cope with separation if they can't tolerate being separated from you for just a few seconds?