Every Day Is Caturday on the Internet

This page celebrates the funny felines that posted on September 9, 2009 in protest of "A Day Without Cats." That infamous day was initiated by urlesque.com, which organized over 40 major websites and blogs from Cute Overload to NPR to participate in the ban. Participants pledged not to share any cat videos, feline photos, lolcats, or discussion of cats. They argued that the internet has become over-caturated with cat humor.

Other websites refused to ban cats. Buzzfeed created an Every Day is Caturday protest. Icanhazcheezburger featured All Cats, All Day for 9/9/09. Shortformblog.com hosted a Catstravaganza, featuring many new lolcats, cat videos, and miscellaneous cat-related posts. Dozens of blogs and websites, including Neat-o-rama, chimed in with Day WITH Cats counter-protests. Nashville Music Blog posted 10 Songs to Protest "A Day Without Cats on the Internet".

Below are just a few of the lolcats, videos, and images of cats that were posted on A Day Without Cats.

All proceeds from this page go to the Humane Society.

Samhain's Response to a Day Without Cats

Naturally, my own Samhain the Cat commented on A Day Without Cats.

A Day Without Cats: So What?

At first glance, the Day Without Cats ban failed. However, it earned urlesque a lot of free publicity and links. Many web users had never heard of this website (I hadn't), whereas millions are aware of the most famous cat videos, lolcats, and cat memes. So A Day Without Cats demonstrates viral marketing, creating a "meme" -- an idea, image or video -- so controversial or appealing that the web community propagates it for you.

On the other hand, the failure of the Day Without Cats ban demonstrates the ornery nature of the internet. It's nearly impossible to start a meme, because you're dependent on millions of people being willing to pass your idea along. For any meme that gains traction, there is an opposite reaction. Like a cat, the internet will only do what you wish if it feels like it. Coerce it, and you may get scratched.

Here's a few cat images that were posted on the internet in defiance of the Day Without Cats.

(Right) This Demotivational Poster was shared by "Spock 2.0" in comments on Jezebel.com's blog post about A Day Without Cats. The poster's origin is roflrazzi.com.

(Below) This widely-circulated lolcat appeared on several replies on Livejournal.

Below, one of several Lolcats posted on icanhazcheezburger on 9/9/09:

Miss Cellania had this to say about A Day Without Cats.

(Below) Nanci B. uploaded this photo of her owner, Shadow, to icanhazcheezburger and her blog under the heading, "A Day Without Cats? Yeah, Right."

There were also many adorable photos of Mrs. Wendy Steinman the Cat, which I will not repost since they're personal photos (as opposed to images uploaded on a photo-sharing archive).

Here we see the video that spawned the protest, featuring famous cat videos, lolcats and photos with the cat edited out. How many can you recognize?

Antinocats Channel - Created to Protest A Day With No Cats

Amazon Spotlight: I Can Haz Cheezburger 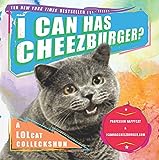 I Can Has Cheezburger?: A LOLcat Colleckshun
The first collection of famous Lolcats. Note that this webpage donates any earnings it makes to the Humane Society, so if you purchase this book, you'll be chipping in a few pennies for cats and other furry friends!
Buy Now

Charlie Responds to a Day Without Cats

A Day Without Cats: Postscript

A Day Without Cats was sponsored by urlesque, which is owned by AOL.

AOL was protested for mass-mailing over a billion landfill-clogging "Free Trial" discs to actual, not virtual mailboxes.

Now an AOL subsidiary is protesting the proliferation of e-spam in the form of cat videos.

I doubt I am the only one who finds this funny!

No way! Every day is Caturday!