American Black Bears In All Their Glory

Get all the facts about American Black Bears here

Here you'll get facts, photos, videos of the American Black Bear in all their glory. There are also informational links for organizations who study them, photograph them or fight to save them.

As you can see by the cub in this photo, Black bears come in brown, cinnamon, and they even have a subspecies, known as the Kermode bear aka Spirit bear that is found in British Columbia, Canada, where 1 out of every 10 are cream/white in color.

So, scroll down the page and look at all the great stuff on Black Bears. And come back often as I'll be adding more "stuff". They don't call me Bearmeister for nothing!

My Blog has been HACKED and is down temporarily so some photos are not loading on this site.

The American black bear which is found only in North America is fairly small. In fact it is the smallest of the 3 bear species found in North America standing only 2 to 3 feet at the shoulders and 4 to 7 feet long (nose to tip of the tail). They usually weigh between 150 and 300 pounds, however, some males have been found at 500 to 600 lbs. Females are smaller.

Their fur is usually uniform in color but they sport a brown muzzle and sometimes have light markings on their chests.

In the East, the bears are usually black in color while in the west, the bear populations often have brown, cinnamon, and blond coloration in addition to black.

The black bears that have cream/white fur are known as Kermode or Spirit bear or Ghost Bears, a subspecies. These bears are found only in coastal British Columbia, Canada.

They usually life between 20 and 25 years in the wild.

What is a Black Bear's Range?

The American black bear is found throughout America including Canada, the United States and Mexico.

In Canada, they inhabit the forested areas where they have historically lived. The only exception is where the land is heavily farmed.

In the United States their habitats have dwindled because of human populations have moved into their habitat. They are now restricted to the less populated forested areas.

Black bears used to inhabit the northern mountains of Mexico. There are now only a few scattered populations of bear.

How do Black Bears Breed?

The size of a female black bear is the determining factor on when she will have her first litter. Some can become pregnant as young as 2-1/2 and others as old as 10 years.

The bears mate in late May or June. The egg does not immediately implant in the uterus, instead floating around until November at which time, they implant that is IF the bear has gained enough weight to sustain the pregnancy.

In January, 2 to 5 cubs are born. And, yes, the mother is still in their den hibernating but she actively takes care of here cubs. She cleans them by licking them and aligns them with her teats. They remain in the den for until April, growing all the while.

Black bears are omnivorous. They eat salmon and will occasionally kill moose calves and young deer. They also eat plants, fruits, nuts and insects. Like all bears, they love honey.

Black bears will pick out a shallow depression in the earth, under logs or in hollowed-out trees or dig a den to hibernate during the winter.

In the past, the type of hibernation black bears do was not considered a true hibernation because their body temperature does not drop appreciably.

Black bears and brown bears are now both considered hibernators because mammalian hibernation now takes other factor into consideration such as they go up to 7-1/2 months without eating, drinking, urinating, or defecating.

Upon waking, they forage for new shoots and any animals they find that were killed due to the cold. This helps them build their strength quickly.

Black bears are smaller in stature than brown bears. Although some may have similiar coloring to Brown Bears, Black Bears are a smaller bear.

Also, black bears have no shoulder hump and their ears are both larger and stand straighter than ears on brown bears.

When there is a confrontation, Brown bears have an advantage of size over the black bear.

Protecting Bears and The Environment

When I discovered the problems facing bears, I looked for an organization that I could work with to help save them. I found the National Wildlife Federation (NWF). Their mission is to protect wildlife for our children's future, connect people with nature and to confront global warming.

I am proud to be a member of NWF and to support them in their efforts to save Bears and other animals from extinction.

It is virtually unheard of for a black bear to have 5 cubs at one time. Tom Sears, a professional photographer, found one and took pictures of her family over a period of time.

For his story about his encounter and more photos, click Black bear.

Below is a photo of a Kermode Bear. This bear is a cream/white and usually found in British Columbia, Canada.

Because this sub-species is so unique and endangered, I have created a separate lens that explores them with more information, photos, videos and organizations helping to save them.

Are you worried about squirrels getting to your bird feeder? Well, now you know you have to worry about bear too. Check out this cute photo...

Here are some great books on Black Bears. Let people know which you think are the best by voting for your favorite book. It's okay to vote for more than 1. And, you can add a another one from Amazon or take a copy of this list. If you add one, don't forget to vote for it!

Living With Bears: A Practical Guide to Bear Country
Colorado author Linda Masterson dispels myths, replaces fear with respect, and lays the foundation for improving human-black bear relations with an inside look at the fascinating world of these highly intelligent, adaptable and resourceful animals found in 41 U.S. states and every province in Canada. With over 900,000 black bears roaming North America today, people from Florida to British Columbia are encountering bears more often, and as a result, human-bear conflicts are on the rise. This guid...
Buy Now 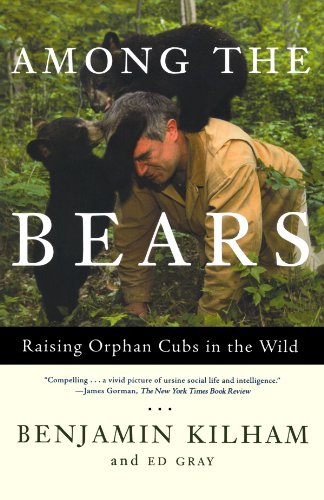 Among the Bears: Raising Orphaned Cubs in the Wild
In the spring of 1993, Benjamin Kilham, a naturalist who lives in the woodlands of New Hampshire, began raising a pair of orphaned wild black bears. The experience changed his life. While spending thousands of hours with the cubs, Kilham discovered unknown facets of bear behavior that have radically revised our understanding of animal behavior. Now widely recognized for his contributions to wildlife science, Kilham reveals that bears are altruistic and cooperate with unrelated, even unknown indi...
Buy Now

Bears: Polar Bears, Black Bears and Grizzly Bears (Kids Can Press Wildlife Series)
The eating habits of bears is one of fourteen topics in this clearly written look at three North American bears — grizzly bears, polar bears and black bears. You’ll find out how and where bears live, how they give birth and raise their cubs, what they eat and much more.Did you know?• Bears eat so much in the fall that they don’t need to eat during the winter.• All baby bears have blue eyes.• Polar bears are related to dogs.
Buy Now 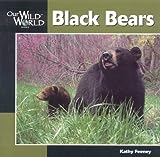 Black Bear (Our Wild World)
Every title contains: -Where the animal lives, what it eats, when it sleeps, how it raises its young, and much more. -Over 30 vivid, full color photos and illustrations. -Sidebar 'Fun Facts,' an index and a list of useful Internet Sites.
Buy Now

Beauty Within the Beast: Kinship With Bears in the Alaska Wilderness
An innocent act of kindness turns a bear into a dangerous marauder and when she is killed she leaves her three cubs without a mother. Stephen Stringham and his new bride decided to raise these three orphan cubs in the Alaska wilderness. Together, they taught Ontak, Chrislee, and Jonjoanak about which plants they could eat and how to fish and hunt. Dr. Stringham's extensive scientific background made him an ideal teacher of the foraging skills and the social skills they would need to live in a be...
Buy Now

Black Bears: A Natural History
In 1990 author, naturalist and photographer Dave Taylor set out to research and photograph black bears in North America - a quest that took him from the high arctic to the swamps of Florida, and from the East Coast to the shores of the Pacific. Of the three species native to this part of the world - the grizzly or brown bear, the polar bear, and the black bear - Taylor devotes this beautifully embellished volume exclusively to the black bear, the most numerous of North America's three bear speci...
Buy Now 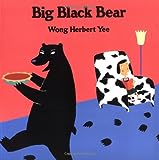 Big Black Bear
When Big Black Bear shows up at the Brown Brick House on Sycamore Street, he's not very nice or polite. He barges in, makes a mess, and even threatens to eat Little Girl. Will she be able to teach him some manners?
Buy Now

Black Bears in the News

Member of Save Our Bears (SOB)

Save Our Bears is a list of lenses devoted to help change the plight all of the 8 bear species through awareness and fund raising.

The lenses show the wonderful nature of bears and many will, at the same time, shine a spotlight on the dangers bears face including: trophy hunters, gall bladder and bile farming, pollution, bear baiting, global warming, and habitat destruction.

Click Save Our Bears (SOB) to see lenses about bears.

Black Bear Cub up a tree

How you can support National Wildlife Federation's

Their campaigns address the issue of climate change and its effect on polar bears from many angles, including clean energy, sustainable tourism, youth conservation leadership, reversing nature deficit, and protecting wildlife from global warming through adaptive management of habitat.

Do I look wild and dangerous?

Want to link to this page? Here's how.

WANT TO LINK TO THIS PAGE?

Here's the HTML code to copy and paste:
American Black Bears in all their Glory

This work is covered by copyright and can not be reprinted

in any matter (physical or digital) without prior written consent.

Please use this guestbook to let me know if something is missing or could be done better. I can't bear to disappoint you!