Atlantic Puffin: the Sea Parrot of the North

A dapper little clown of a bird, the Atlantic Puffin is a black-and-white seabird with a large head and a large, multicoloured bill.

Quick Facts - on the Atlantic Puffin

I was lucky enough to grow up in a part of the world where the cute and comical birds were easily seen, just by going out on my cousin's boat for a buzz around the islands, and one look will tell you right away what a favorite the puffins are with kids!

If you want to see this colourful "Little Brother of the North" up close, that can be arranged - as exotic as it may look, the Atlantic Puffin is one of the most common seabirds of the North Atlantic - but you'll need to visit one of the breeding colonies to do so, as the birds spend the winter at sea, far from land.

How Big is an Atlantic Puffin?

Atlantic Puffins are mainly black above and white below, with grey-ish white cheeks, bright red-orange legs, and a large multi-coloured bill. Viewed from below, as it flies, the Atlantic Puffin shows a white underside and the grey wings appear noticeably rounded, which makes them look a bit short for the size of the bird.

Changing of the Colours

The distinctive large bill is triangular in shape and, in the breeding season, it is bright orange with a patch of blue edged with yellow.

Bright yellow-orange plates at the corners of the bill - those patches that add to the bird's clownish appearance - grow in before the breeding season begins; these are shed after breeding, and the bird's face gets significantly darker as the season ends.

Outside breeding season, or as a juvenile, the Atlantic Puffin looks like quite a different bird than the colourful clown we normally think of as a puffin!

Speaking of breeding - it may interest you to know that Atlantic Puffins are monogamous. When they choose a mate, they stick with that one bird and don't mate with others.

Not only that, it is the male puffins who do much of the work in preparing the nesting area (rocky burrow) for use, and both male and female play an active role in parenting the young.

A Book About Puffins - For Kids and Adults

Learn more about this comical bird by reading together! 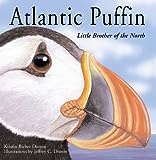 Atlantic Puffin
The Atlantic Puffin is a familiar symbol of the Atlantic region, and its Latin name means "Little Brother of the North." Beautifully illustrated by Jeffery C. Domm, director of the Nova Scotia Wildlife Society, this educational and entertaining book on the Atlantic Puffin details habitat, breeding cycles, eating and nesting habits, and more about the life of this much-loved seabird. Suitable for both adults and children.
Buy Now

Voice of the Puffin

When it is out at sea, the Atlantic Puffin is normally silent, although it will sometime make a quiet purring sound as it flies. On shore, in the colonies where puffins gather to breed, chicks will peep for food and the adult puffins will often make a low growling sound. Because they most often sound off in their burrows, when startled, there is a strange and unsettling quality to the voice of an Atlantic Puffin; some have compared the sound to a short burst from a distant or muffled chainsaw.

Click here to hear the voice of the Atlantic Puffin, in an audio clip from "Hinterland Who's Who," a joint project in nature education by Environment Canada and the Canadian Wildlife Federation.

Where to See an Atlantic Puffin - Range and Habitat

Atlantic Puffins gather to breed on the coasts of northern Europe, the Faroe Islands and Iceland, and north-eastern North America, from north of the Arctic Circle down to the state of Maine in the US and the northern parts of France in Europe. Atlantic Puffins spend the winters out at sea, far from land, scattered widely across the North Atlantic. In fact, the only reason the Atlantic Puffin returns to land is to rear its young; mating takes place out at sea.

The largest puffin colony in the western Atlantic (225,000 pairs) is found at the Witless Bay Ecological Reserve, 32 kilometres south of St. John's, Newfoundland and Labrador, Canada. Elliston, Newfoundland, once called Bird Island Cove, is another popular place for viewing the Atlantic Puffin. The birds at that site have become so habituated to tourist, one can often walk up within a few feet of them.