The Cockatiel is a small parrot bird of the Cacatuidae family. These birds are originally from the outback regions of the Australian continent. Their preferred habitat includes Australian wetlands, Scrublands and bush land. They usually have an average size of about 12 to 14 inches long. Healthy adult cockatiels usually weighs between 88 to 178 grams. They are generally very social and gentle birds and tend to adapt very well in most households. They have an average life span of about 16 to 25 years. They have over the recent years, become very popular in the United States as most people discover and appreciate these birds.

Like some other cockatoos, as for example the Sulphur-crested Cockatoo, the cockatiel has an erectible crest. Cockatiels and cockatoos in general also share other features, such as the facial feathers covering the sides of the beak, which are rarely - if ever - found outside the Cacatuidae family. In contrast to most cockatoos, the cockatiel has long tail feathers, roughly making up half of its total length. The cockatiel's distinctive pointed yellow crest is held erect when startled or excited, while a crest slightly tilted indicates a relaxed state of mind.

Cockatiels are extremely social birds. They have a need for social interaction. A single bird will get more attached to its keeper but if you are not at home a lot it is best to get two birds. It is a fact that two birds of the same sex get along just as well as a mixed pair. Even more so if the cockatiels were introduced while they are still young.

The plumage is generally mid-grey, lighter underneath, with an orange cheek patch and a prominent white blaze on the wings. A row of yellowish spots can be found underneath the wings of female cockatiels, but not on the males. Female Lutinos also have barred tail feathers. Both the cock and the hen have yellow facial feathers: the female has a yellow wash around the beak and eye, in the male, yellow covers most of the head and the fore part of the crest. Male cockatiels are very protective and nurturing of their offspring and are known to be very capable of raising their newborns if the mother is unable to.

Males have great vocal abilities and females are fairly quiet. Females are more aggressive and they are more likely to hiss and bite. If you put a mirror in the cage, a female looses its interest faster than a male.

Like Cockatoos, cockatiels tend to be very vocal when they wake up in the morning and at night. They will also be very vocal if you have been out for a while and you come home to them, this is their way to greet you, and let you know that they are very happy you are home to play with them.

Cockatiels can also get very spoiled, and can learn very fast how to control you. They do this in the same way their "bigger brothers" tend to as well.. with excessive screaming. If you come to the cage every time your cockatiel screams, your cockatiel will understand that screaming equals to you coming over. You do this a few times and your cockatiel will develop the ability to use their screams as a "remote control" to make you come over.

It is important not to reward such behaviour, it is better to ignore it instead to show your bird that he cannot get attention with such actions. Try to teach your bird other things like talking, whispering or other more productive ways to "voice" himself. Always reward good behaviour with either treats, or more attention. Try to look and find out why your pet is screaming by watching or monitoring his behaviour before he starts going on a rampage. Most important of all though, is to accept that when acquiring such a pet, they tend to be loud at times. If you don't like such high pitched noises it is better to opt for a different pet. 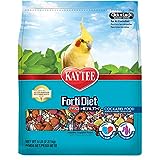 Tips For Teaching Your Cockatiel To Talk