Goodbye Knut: A Tribute to an Extraordinary Polar Bear

I had just started sculpting polar bears and being aware of them when I saw my first article about Knut being born. As soon as I saw his photos and read his story, I was hooked. Completely. Hopelessly. Joyfully.

I read about him daily. I couldn't get enough and I told everyone I met about him. I was so hooked, I thought that more people might want to know about him too so I started a blog called Polar Bear News. It was my first blog and I had a lot to learn. So, as Knut learned to be a polar bear, I learned how to blog.

Next, I heard about Squidoo and decided to try my hand at it. Are You Polar Bear Aware? was born. I decided to make it about polar bears not just about Knut. It was an instant success and I believe that Knut had a big hand in making it successful. People were starting to notice polar bears thanks to all the press he got and the sympathy his abandonment garnered.

Knut not only nurtured my love affair with polar bears but also instigated my journey with Squidoo, which has become another love of mine.

All royalties earned on this lens are automatically donated to Polar Bears International to help save polar bears.

PHOTO: Courtesy of Berlin Zoo. (A favorite of mine.)

BREAKING NEWS - Feb. 14, 2013: A lifesize model of Knut will be on display beginning February 16 through March 15 in Berlin at the Natural History Museum. After the massive potests of Knut fans and animal lovers from around the world when it was discussed that they would stuff Knut, they changed their plans. The model is a plastic form covered with Knut's fur. A compromise but one I believe most of us can live with. For more info, click Lifesize Model of Knut ...

Knut Made a Lasting Impact on Millions of People

Germany's famous polar bear died today, Saturday, March 19, 2011 at the young age of four. Although Knut's life was short, it was impressive. He made a huge impact on the world. People who didn't know what a polar bear looked like were awed by this little bear's playfulness and curiosity. He also put a face on Climate Change for many people.

His fame started shortly after his birth on December 5, 2006 when his mother rejected him and he was to be raised by humans. Knut-the-Cute, as he was fondly called, was pronounced Germany's Global Warming Ambassador. He had his photo on the cover of Vanity Fare with American Actor, Leonardo DeCaprio; had thousands of aticles and YouTube videos about him. He even had death threats, body guards and a custody suit. Visitors came from all over the world to see him in person, helping raise in 2007 alone, over $7.6 million for the Berlin Zoo.

Knut's image was, or is, used to sell products worldwide, selling everything including stuffed bears and sweets.

The Knut I fell In Love With

This is a great photo of Knut approximately 1-1/2 years old. He put on a little weight but he's still a cutie!

A memorial bronze sculpture will be commissioned of Knut. The photo here is only one of the 42 entries coming from German or Austrian artists. You can vote for your favorite by:

1. Either send an email letter to your favorite number in the subject line, enter the text name, address and telephone number.

To see all 42 entries, go to Knut Memorial Sculptures

Knut is dead. I still can't believe it. He died today, Saturday, March 19th at the Berlin Zoo, his home for his short life. He was only 4 years old. I expected to be writing and reading about him for another 20 years.

I am simply stunned.

March 26, 2011: According to a Reuters article, Epilepsy killed celebrity polar bear Knut: report, "Neurologists reported that they performed a CAT scan on Knut's brain which revealed abnormalities and stated that he died after an epileptic fit." They surmised that Knut inherited Epilepsy from his father, Lars, as he suffered from the disease too. They also said, "Neurologists said the fit was triggered by a brain disorder yet to be identified. Knut's brain is now being studied at the Leibniz Institute for Zoo and Wild Animal Research (IZW)."

March 30, 2011: New results show Knut did not have epilepsy. Instead he "had developed a fatal brain disease," according to a source of the German Press Agency. They said that according to the doctors Knut did not drown and would have died instantly. That ends speculations (including mine) that if they had fished him out sooner, would he have lived? We'll see if this is the final-final results. I'll keep you informed.

April 20, 2011: Knut's brain is saved for posterity in 3D. According to M&C News, "... Knut's skull has been saved digitally. It has also been reproduced on a 3D printer, a device that manufactures shapes using successive layers of resin. The resin skull is a perfect replica of the original inside the head of Knut".

Knut May be Stuffed!

But it is. Well, at least they are talking about having Knut stuffed and put on display at the Berlin Natural History Museum. The thought is disgusting and degrading. Let him rest in peace.

Gesine Steiner, a spokeswoman for the Museum told Bloomberg, "It is true that our taxidermists are working on his corpse and have removed his fur. We haven't yet made a decision on whether we will stuff him and exhibit him. We have to talk to the zoo. We do of course have lots of stuffed zoo animals on show here."

I hope that this does not happen. I don't like seeing stuffed animals any more than I would like to see a stuffed human body. I'll keep on this story and let you know more as it unfolds. You can read more at Knut the polar bear may be stuffed, displayed in Berlin museum a story by USA Today.

3/25/11 Update: Gesine Steiner from the Museum is insisting that Knut will not be stuffed. He will be "prepared" by stretching it over a plastic form. Sorry. Stuffed, prepared, stretched -- it's is still indecent. If you agree with me, please contact the Berlin Zoo's Director at ...

Gabriele ThÃ¶ne / Member of board of directors

Almost protests have been posted in the zoo's online memorial book for Knut. A protest is being organized for Saturday morning (Earth Day) at the zoo. If you are in Germany, please join the efforts.

Dec. 27, 2011: Knut's body is still on ice as far as I can tell (see article in above module dated July 26, 2011). No news yet as to whether Knut will be stuffed and put on display or not. I think they are waiting until the furor dies down. I'll keep you informed. Frankster

When Knut's mother abandoned him, zoo-keeper, Thomas Doerflein, took over the job of Mom. Not only did he live with Knut, day and night; he also fed him, played with him, and taught him to the best of his ability to be a polar bear. Their relationship was very close as you can see by these photos. (What I would have given to be in his place.)

The relationship was one of the many controversies that surrounded Knut his whole life.

On September 22, 2008, after Knut and Doerflein were split up, Doerflein is found dead in his apartment. Rumors saying it was suicide were later discounted as the autopsy showed a heart attack.

Below is a picture taken of Knut shortly after the announcement. His sad look seems to say it all for many of us who fell in love with both Knut and Doeflein. For more on this story, click Zookeeper's death.

Knut and His Tongue - Knut was Always Sticking out his Tongue

If you haven't read Knut's full story, then get one of these books. They will fill in the blanks for your about his life. 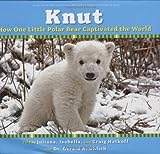 My good friend and polar bear lover, David M. Booth, just released his first book of polar bear cartoons and it is terrific!

David is an Alaskan artist and cartoonist. He is the official cartoonist for Polar Bears International and you can see his cartoons on their website. David also donates his work to many other non-profit organizations that deal with Polar Bears, endangered species, and the environment. The plight of the polar bears is not a humorous subject, it is David's philosophy that cartoons that add a bit of humor can accomplish much more than "doom & gloom" dialogue.

The book aslo contains beautiful exclusive polar bear photos, everything one needs to know about polar bears, and even a polar bear crossword puzzle.

You can get you own copy by clicking on the book photo above, or click Skating on Thin Ice.

Wear a Bear in Knut's Honor

Just click on the logo you like below to see all of the products available in that design from t-shirts and jackets to card and posters. To see dozens more of his designs, click B-Cool Stuff

My Favorite Knut Photo - Knut Was a Happy Piolar Bear

I've always believed that Knut was a happy bear. You just have to look at photos of him. When he would go off by himself, the press or some group would say he was depressed, sad or unhappy. I disagree. If you were put in front of crowds daily, wouldn't you want to have some alone-time, some decompress time? I know I would.

This is my final argument -- this photo by Reuters. Isn't it wonderful? Doesn't he look happy? Content? Satisfied? I'd say YES!

Nature vs. Man - Was the Berlin Zoo right not to let Knut die?

Do you think Knut should have been left to die instead of being raised by humans?

Knut in the News - The Latest Articles about Knut-the-Cute

Want to Link to This Page?

WANT TO LINK TO THIS PAGE?

Here's the HTML code to copy and paste:
Goodbye Knut

This work is covered by copyright and can not be reprinted

in any matter (physical or digital) without prior written consent.

Please use this guest book to share your thoughts and/or questions about Knut or this lens. Thank you.

Please share your thoughts about about Knut - Are you a Polar Bear Lover?