This is the video I made of storks nesting in the trees when we visited the Ornithologique parc at Teich, Basin of Arcachon while on holiday in Southern France.

Our day visit at the park was fantastic, and from a good vantage point (as the video shows) I was able to get spectacular close-up video shots of these storks in their nests. Anyone with a good camera and a descent zoom lens will be able to get good photographs of these most magnificent birds in their natural habitat in this bird wildlife park. 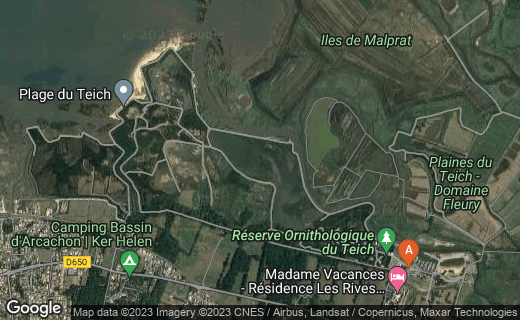 This wildlife park, open to the public, is a great natural habitat where you can see storks nesting close-up; great for photography and videoing.

A Wildlife and Wetlands Reserve in France

A Natural Habitat for Birds

In this article you can learn a bit about Storks and their nesting habits, and about the wildlife habitat of this bird park in southern France; a wetlands wildlife bird park similar to Slimbridge, a 'wildlife and wetlands' bird reserve in Gloucestershire, England.

Wetlands
An Essential Reference book packed with information, great for learning about Wetlands and ideal for field work. This reference book is highly praised by wetland researchers and other professionals studying the subject, in the reviews; and should be of great interest to anyone with a general interest in wetland ecosystems.
Buy Now

It goes without saying that Storks are birds, birds being the sole surviving dinosaurs on Earth. More precisely Storks belong to the Ciconiiformes family and are exclusive to the sub group Ciconiidae; there being 19 living species of storks in six genera.

Storks are large wading birds with long legs, neck and long stout bills and live in many part of the world preferring drier habitats to their other closely related birds such as herons, spoonbills and ibises. A group of storks is often referred to as a 'muster of storks' or a 'phalanx of storks'.

They don't have a syrinx and therefore are mute so bill-clattering is an important means of communication for them at the nest site. Most of the Stork species are migratory and generally they feed on insects, earthworms, frogs, fish, other small birds and small mammals; and when flying storks generally soar (using thermal air currents) or glide to conserves energy.

The Nesting Habits of Storks

Large Storks Nests in Trees at the Ornithologique Parc

Stork's nests are usually very large (anything up to six feet wide and 10 feet deep) and often used for many years. Like swans, storks can be monogamous, and they have a tendency to reuse the same nests each year.

The Ornithological Park in Teich, Basin of Arcachon, southern France, near Bordeaux is very much like the bird sanctuary (Wetlands for Wildlife) at Slimbridge, Gloucestershire. Open to the public since the early 1970s these wetlands in Teich, a well preserved natural environment consisting of swamps, mud-flats, humid meadows, and ancient fishponds are one of the most important migratory routes for European birds and provides important shelter where about 300 species of birds can thrive

To walk the entire park the main route is about three miles return and includes hides and other observation posts at regular intervals. For the less ambitious visitor there is a shorter route of about half the distance.

If you like Slimbridge then you'll love this wetlands nature reserve for birds in France. Above, is the full edited video I made of our holiday day trip to the Ornithologique parc at Teich, a superb place to visit for anyone holidaying in the Bordeaux Region of France. This wildlife wetlands bird park open to the public isn’t quite as large as Slimbridge, Gloucestershire in England so you can stroll leisurely around the paths quite easily within a few hours, and fill up a pleasant afternoon on your holiday.

Wetland Ecology: Principles and Conservation
A comprehensive and richly illustrated book which introduces wetland ecology taking you from the basics beginning with underlying causal factors to more advanced concepts adding depth and context to the subject.
Buy Now

Slimbridge Gloucestershire, England, Just like the Ornithologique parc in southern France, is another great wildlife wetlands open to the public where you can observe birds in their natural habitat.

It’s a great place to visit for the whole family to enjoy a day out in Britain, and as we only live an hour’s drive from Slimbridge we’ve visited it for day trips quite a few times over the years.

As this video clip shows (which I made following our last visit) it’s packed with the delights at the wonders of nature.

Do you visit Wildlife Parks?

As many will know these days, birds evolved from dinosaurs. Although most dinosaurs were wiped-out (along with most live on earth) when the asteroid struck the earth over 60 million years ago (as a nuclear third world war would wipe out most life on earth today) some survived.

At the time the dinosaurs, who were the largest creatures on the planet, ruled the earth. With the worldwide holocaust the meteor brought the large animals (exclusively dinosaurs) didn’t stand a chance; they had nowhere to run and they had nowhere to hide. Also, as most life on earth was destroyed (in the aftermath of the catastrophe) there just wasn’t enough food available to meet the quantities required to sustain large animals as the dinosaurs.

However, the small animals e.g. mammals, reptiles, amphibians and small dinosaurs, were more able to take flight and hide from the immediate dangers; and in the aftermath required less sustenance to survive.

These groups of survivors included the small dinosaurs that were capable of flight. While mammals and other small creatures could burrow underground, to avoid the immediate impact of the disaster; the small dinosaurs capable of flight were able to fly to safer ground and to where there was available food. These were the birds, and today (including the storks) have become a very dominant and diverse species; branch of the dinosaurs.

These days there are over 10,000 species of birds worldwide; with over 60 species, including the ostrich have through evolution lost the ability to fly, and others (like penguins) evolving to become swimmers.

Essential Ornithology
Essential Ornithology which provides a concise but comprehensive introduction to the biology of birds may be of interest to some readers because as well as the usual chapters on the subject this book also takes a look at their dinosaur origins and their evolution into the modern birds we know and love today.
Buy Now

How Did Dinosaurs Evolve Into Birds?