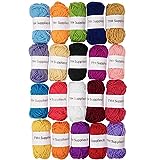 I only learned to crochet a little bit more than a year ago. Even in that short amount of time, I’ve gotten a little bit of crazy with my crochet. I’ve sought out yarn in international destinations. I’ve checked just about every available crochet book out of the library. I crocheted a large portion of the gifts that I gave for the holidays. So I totally understand getting passionate and active and little bit over the top when it comes to being a fan of the crochet arts.

1.     Olek. This stunning crochet artist is the most extreme one I’ve heard of thus far. She recently gained attention for her work in crocheting a huge pink and purple cozy for the Charging Bull on Wall Street in New York. However, that’s only one of many extreme crochet projects that she’s gotten attention for. I see her name popping up all over the place in articles about crochet, design and art. It seems that she crochets practically all day long, incorporating information from every other life experience into her works of crochet art. It’s absolutely amazing!

I don’t love everything that this artist has done, but some of the things that I do think are really cool include:

o   Camouflage crochet. She crochets backgrounds and then crochets clothing for people and sets them up on the backgrounds so that they blend in with their surroundings. The end result is really intriguing.

o   Costumes. Some of the elaborate fashion costumes that Olek has created using crochet are just stunning to me. I love the intersection of art and fashion that crochet is all about and I am interested by the way that Olek absolutely takes this to the extreme.

o   Crocheted balloons. She has done work creating elaborate sculptures out of balloons that she’s crocheted together. I can’t even begin to imagine how this work is done but the end result definitely impresses me.

2.     Joana Vasconcelos. I have written an entire hub about this multimedia artist in the past because all of her different works intrigue me. However, it’s her crochet work that I find to be really fascinating. My favorite of this is when she does intricate lacework with crochet, using doily-style pieces to create elaborate objects. What’s so extreme about her work? It’s all about the size of the pieces that she creates and the sheer number of different objects that she has covered with crochet art. From bulls’ heads to miniature pianos, Vasconcelos has turned a range of objects into crochet art.

3.    Patricia Waller. Patricia Waller is a crochet artist who is extreme because of the subject matter that she chooses to portray with this art form. For example, she has done a pair of male and female aliens with graphic genitalia and she has done a piece called Who Killed Bambi? in which the deer in question has been attacked with a butcher knife and is bleeding. She has other more whimsical and lighthearted pieces as well but even those are unique in style from any other crochet and yarn work that I’ve seen people doing elsewhere. It’s the fact that she’s gotten so creative with her pieces that makes her extreme in the world of crochet.

4.    Toilet Paper Cozies. It is my personal opinion that you can take things too far in terms of making cozies for the objects in your home. Some people just get insane with the crochet and make teapot cozies and beer can cozies and Christmas ornament cozies and on and on and on. In my opinion, on of the most extreme cozies projects that sadly seem to be rather popular is the toilet paper cozy. Maybe I’m just missing something when it comes to this particular object but I don’t see any reason at all whatsoever why your toilet paper needs to be covered up with a cozy, especially one that you’ve taken time and money to craft by hand. What do you think; would you call this extreme?

5.    Crochet Car Cover. Awhile back there was a news article that caught my attention about a Smart car that had been covered entirely with its own crochet cover. This wasn’t a car cover that you just throw on when the car was parked. Instead, it was a cover that could stay on the car at all times, with areas cut out appropriately for the headlights, windows, etc. The car remained fully functional and accessible but became a piece of yarn art because of the crochet cover that was put onto it. I actually think that this project is really cool. There’s a lot of different patterning that went into the cover; it’s not just a single design throughout. That means that it must have taken a lot of time, a lot of effort and a lot of yarn. The patterns don’t clash with one another so the artist obviously had a good creative eye. Nevertheless, a project of this magnitude and unique-ness is a little bit on the extreme side I would say!