Let's Give the Artist a Break!!!

Why do musicians achieve fame and fortune in their lifetime, while visual artists struggle for notoriety and the financial independence to support their creative endeavors? What makes the Rolling Stones more accessible than Kandinsky? I’ve struggled with this question for years as I’ve sought ways to support myself financially as a visual artist, but conclusions still don’t jump out at me. I don’t know the answer to my question, but I’m going to make a few guesses. There are several elements that make music inherently more accessible than a painting or print. As I put forth my theories and opinions, it may sound as if I believe musicians have it “easier” than visual artists. This is not the case! I am fully aware of the struggles musicians face to lead the life they wish to live. I simply state that music and how it is appreciated is different in ways that offer the musician more opportunities to benefit financially.

I would theorize that music has a therapeutic quality visual art doesn’t share, which enhances its audience appeal. The American Cancer Society states that music therapy can help reduce pain and symptoms induced by chemotherapy. It has also been revealed that music has the ability to synchronize brain waves and aid in the neural patterns that involve behavior such as walking or running, according to Music and the Brain: Processing and Responding by Feyza Sancar. It is said this type of brain stimulation is responsible for the rehabilitating aspect of music, helping patients with immobility or difficulty in moving to move with greater ease.

The effect of visual arts on the human mind and body is less well-defined. It is known that colors evoke specific and spontaneous psychological effects, but this phenomenon is not universally accepted as therapeutic. Colors can excite as well as calm us. Art therapy is now established as a sound psychological tool, but is typically practiced through the creation of art—not as much through its appreciation. My point is the assertion that music has qualities we positively respond to that visual art does not share.

My next argument is the belief that music is more frequently created to evoke a positive response. I am guessing, but it seems plausible that musicians want their music to be accepted more than visual artists do. It is important not to over-generalize here—artists certainly want their drawings and paintings to be liked—but perhaps not to the extent musicians do. While some music is certainly created to shock, anger, or outrage the listener, this seems less prevalent in music than visual art. Public acceptance of music has a tendency toward pleasing sounds and words that comfort us. Drawing and painting has historically served as a tool to outrage the general public. I am guessing again here (and I have never created music) so don’t kill me if I’m wrong, but visual artists (seem to) create for themselves more than musicians do. If a musician writes a song, he or she will share it in public or private venues. Perhaps a spouse or child is the sole audience, but someone else usually gets to hear the song. Not so the visual artist. So many drawings and sketches are never seen by another human being. They are a product of the moment only. Music…endures.

My final theory involves the convenience of music appreciation. Everyone knows where they can go to buy music, but it isn’t as easy to find artwork for sale. I can’t go to Wal-Mart and buy a painting by Wendy Jane Bantam or Lynn Talbot, but I can get the latest Eagles CD. It is also more convenient to own music than a drawing or painting. Thanks to Steve Jobs and Apple, Ipods and MP3 players can store thousands of songs on a stick the size of an artist’s eraser. Most homes don’t have the capacity to store and care for a Wendy Bantam original painting.

Therein lays a key component in my argument for the accessibility of music relative to painting. A musician never sells the master tapes of his or her latest song. The originals are locked in a vault for safekeeping, and the music is mass-produced for public consumption. This is an important distinction. A song that took ten hours to produce can be sold several million times, but an original painting that took ten hours to create can only be sold once. In music, ownership is not compromised by possessing one of several million identical copies of a song or album. If an original painting was reproduced several million times to facilitate its sale to the public, its value would be diminished through the very act of its duplication. No one goes to Wal-Mart in search of art, and anything found for sale in such a venue is looked upon with skepticism. There is status conferred on owning art that is “original” or “one-of-a-kind”, and this aspect of collecting art hurts the visual artist.

Successful musicians can build on their success through the promotion of their music. They can give away copies if they choose, and more importantly, they can perform their music live. A musician can sing their new song in a living room, café, music hall or amphitheatre. A visual artist can show a painting in a gallery, but cannot go on tour. We cannot re-paint the painting in front of an admiring audience. The painting itself can go on tour by being seen and promoted through galleries, but it isn’t displayed for one evening before traveling to its next venue. There are no 30-city summer tours for the visual arts.

For the visual artist to flourish, a fundamental shift in the manner ownership of artwork is perceived needs to occur. Art needs to benefit from mass production the way music does. This is difficult because there is a physical aspect to art that cannot always be effectively conveyed in a copy, but progress must be made for the artist to survive financially. Artwork is now available online through digital downloads, but no one yet covets artwork that springs from their HP printer. This needs to change. The copy needs to become the original, so to speak. If a painting were a recorded song, the idea of selling master tapes would never be considered. With music, the copy becomes the art!!! This is a huge reason musicians are more apt to be financially successful when compared to visual artists. The desire to exclusively “own” the song isn’t even considered. I own the Rolling Stones song, “Wild Horses”, but I don’t OWN it. When I purchased my CD, I knowingly bought a copy of the song, and having the copy for my music collection was all that was intended. I bought the CD to enjoy the music, not to possess something no one else could own because I had it. Owning a copy of Van Gogh’s “Starry Night” isn’t considered owning anything. Its value is limited to the cost of its production and little else. Therein lays the fundamental disadvantage visual artists face.

The Internet can help visual artists if we accept its tools and methods. Web sites can be created for the purpose of selling art through downloads, but they must be accepted by the collector. Art appreciation should be the product of abundance, not scarcity. Collectors need to stop worrying about the value and authenticity of art and instead embrace its esthetic. This has happened for music. Let it be the same for the unknown painter, up all night developing a body of work that will help toward establishing a marginal existence.

Let’s give the visual artists a break and let technology benefit them. Let’s enjoy a painting because it makes us feel good—not just because we own it exclusively. Let’s give it a try.

In the two years since I wrote this article, the topic has become increasingly important to me. Why is it so difficult to embrace the idea of copies-of-art-as-art? What will it take to make this fundamental shift happen? It is difficult for me to say, because I believe it should have occurred already.

The Internet makes it possible for all of us to add more beauty to our lives than ever before. We can reach more people than could possibly be imagined fifty years ago through the power of Google. We can now see the works of artists that previously relied on galleries or magazines to achieve their fame or, worse yet, never realized any acclaim or notoriety. We can fill our lives with beauty through the use of a computer and this remarkable technological innovation known as the Internet. This is an amazing breakthrough.

Why aren't we thrilled by this?

Is it because we are still looking at (or possibly downloading) copies? Does that make art mundane and not worthy of notice or interest? If so, this is madness. It is a madness that still oppresses visual artists around the world--just as it did two years ago, when I originally wrote this article. Just as it has for hundreds and even thousands of years. This is our chance to make art accessible to everyone, and for the artist to benefit from this notoriety in new and exciting ways. This is the opportunity to free artists from misconceptions about what makes art "good" or "great". Think of me as the voice crying out to end the madness that equates scarcity with quality. It's time to change our thinking in this regard.

It's time to make things right.

Painting materials that could help you 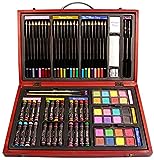