The Zombie Dead By Wayne Tully

All About Zombies And The Creation Of The Dead

Zombies are considered the creation of classic and cult film director George A Romero of the early 60's, even long before these times zombies existed in many forms, but for our purposes we shall stick with the most fondest memories of zombies, which is in horror films.

Zombies appeared by the death of living people, much like a virus that seemed to take over the bodies of the dead like a parasite, just imagine all over the world, anyone who dies becomes a zombie and the death statistics over the whole world is quite high realistically.

In the films they were everywhere, no matter how many guns you had and bullets to shoot, the living dead always survived at the end of the film, in fact that was the point, the slow movements of the zombies made them appear laughable at times, but when they over ran the remaining survivors in the films story, they became not laughable but a true horror genre that has stayed true to it's form ever since the days of the original night of the living dead back in the 60's, although there was that unmentionable running zombie thing in the remake of the Dawn Of The Dead, which we shall not utter here!!

Later on, in some zombie films they tried to explain what caused this zombie like virus, some characters called it an act of god or there was no more room left in hell, even in the first film of The Return Of The Living Dead series were a mysterious green vapour descends on graves of the once dead and re-animates them as zombie flesheaters(or brains,brains!!) is a simple but rather effective notion.

Although I am not a fan of voodoo zombies, as that just implies a trance like state and that is just a pathetic notion, zombies are much more than mere hypnotized people, they are the undead, the rotting corpses of coco the clown and other classic zombies you'll find in the background of such classics as Day Of The Dead

I have created an article about drawing zombies and I will be updating it soon. 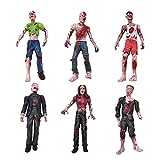 Dawn Of The Dead DVDs On Amazon.com