Mehmet Aksoy and his Symbol of Friendship?

The Statue of Humanity, or İnsanlık Anıtı was created by the renown artist and sculptor Mehmet Aksoy in 2008 near the Turkish city of Kars. In April 2011, the statue was being dismantled after Prime Minister Recep Tayyip Erdogan who called it a "freak."

By the time you read this article the monument to Humanity will have been demolished.

Have you seen The Statue of Humanity?

If you've seen it how do you rate it? 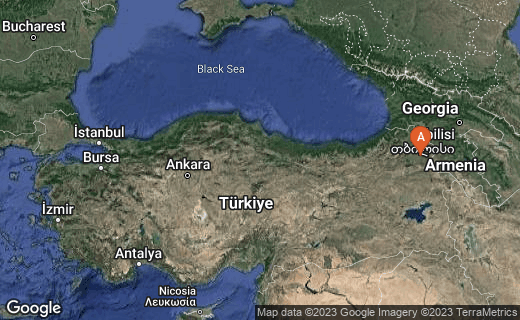 The city of Kars

Kars, meaning either 'the gate', (Georgian), or 'bride', (Armenian), has a long, rich and troubled history. Situated next to the borders of Georgia and Armenia there has always been much squabbling over ownership of the territory.

The town appears in Roman historiography as Chorzene, and part of ancient Armenia. During the medieval period it had its own dynasty of Armenian rulers and was the capital of a region known as Vanand.

It had its own dynasty of Armenian rulers and was the capital of a region known as Vanand. Since then it has been ruled by the Russians and by Turkey.

The once large Armenian community was annihilated in 1915 as part of mass killings which Armenians and many historians call a genocide, a term rejected by Turkey which says atrocities were committed on both sides in World War I.

In 2009 the two countries agreed to normalise relations and, it was at this point that the former mayor of Kars, Naif Alibeyoğlu, commissioned Mehmet Aksoy to produce the sculpture as a gesture of reconciliation.

The Statue of Humanity

The unfinished Statue towered over the city of Kars - with two 30m-high sculptures representing a divided human and, when finished, it would have one figure extending a hand to the other. A “V” symbolizing peace will rise toward the sky from a spot four meters from the monument and tears, symbolizing pain, will fall from the eyes of the Paragon and will be visible from all of Armenia and the Caucasus. These teardrops will glitter with the help of laser lights at night. (Thursday, April 10, 2008, Vercihan Siflioglu, Istanbul - Turkish Daily News)

The statue was located outside the city on top of Kazıktepe Hill situated just across the ancient castle of Karsand near to the shrine of Hasan Harakani. It is constructed in concrete and when finished would have had hands outstretched between the figures to represent the hoped-for reconciliation and friendship between Turkey and Armenia.

The argument against the sculpture was begun by Prime Minister Recep Tayyip Erdogan when, on a visit to Kars, he described the monument as an affront to the shrine of Hasan Harakani, as grotesque and unworthy of being described as art.

"They have put a freak near the shrine," Mr Erdogan was quoted as saying in Hurriyet newspaper. "They have erected something weird."

The Culture Minister Ertugrul Gunay, was caught in the crossfire and attempted to play down the remarks saying "We would not show any sign of disrespect against any artist or tear down and discard his work of art." He defended the statue which many saw as ugly, and the theme of friendship but not the location and it seems that the location is the key factor to the statues literal downfall.

Right-wing nationalists dislike the sculpture saying that it suggests that Turkey is apologetic towards Armenia while the artist himself comparing the situation on NTV television with the Taliban's demolition of ancient Buddhist statues in Bamiyan in 2001.

Has Kars lost a great work of art and a sculpture that could have become a superb symbol of the city of Kars?

The Angel of the North

The first comparable piece of art that sprung to mind when I read about the Friendship Symbol was the sculpture designed by Antony Gormley, located in Gateshead, England, The Angel of the North. Both set in a rather desolate, open landscape and both dominating both landscape and visitors, they both have the same potential to become icons of the region. The Angel of the North is almost worshipped in Britain, the other in Turkey is destroyed.

Mehmet Aksoy was born in 1939 in Kesap, Yayladağı, Hatay Province, Turkey, a town that is today within Syrian territories. After completing his primary education in Yayladağı in Hatay Province, Tarsus, Mersin and Antalya, he enrolled 1960 in Istanbul Academy of Fine Arts (today Mimar Sinan University of Fine Arts) and later studied in England and Germany.

Called the "Anatolian Michelangelo Aksoy's public sculpture includes a massive marble "Memorial to the Deserter" in Germany in honor of those who refuse to fight in unjust wars. The figure is carved as a negative, a technique that Aksoy employed again in later work. He works primarily in stone but often adds other material, using various different types of stone and metal in a single work.

Was the state have the right to remove the statue?

Together with my husband, I run painting holidays, a guest house and gite, Les Trois Chenes, in Limousin, S W France. Tale a look at our web site www.lestroischenes.com

You can see what else I've been writing about in 'Find an Article by Les Trois Chenes'. See more of our life in A Scrapbook of Limousin, France