The Close Up World of Beautiful Flowers

When I first became interested in photography, and began to learn about different photographic modes and techniques, it was close-up or macro work that instantly gripped me. The fine, close detail of nature is wonderful - and I wanted to explore this intimate method of photography more.

That said, I still get a thrill out of capturing a good landscape at dawn or dusk with a wide angle lens, or trying to follow a bird in flight over a windy hill - but going really close into flowers, and seeing the stamens and pollen sacs in great detail is something extraordinary.

You don't have to have a dedicated macro lens and fancy camera to take shots like these. Many point-and-shoot cameras come with a preset macro setting on the main selector dial, so have a go and enter the macro world of virtually anything - as long as it doesn't move much!

All photographs here except a poppy image from Art.com are © Rob Hemphill. They appear here in low resolution only, but if you wish to have any image as a professionally printed photo, please click on the icon or link near that image.

My Camera And Lens Used

There is something very delicate about rose petals and the way they overlap the layer beneath alternately, just as the leaves do on the stem. It is a sort of endless progression to the heart of the flower.

There are well over a hundred different species of the genus Rosa. The flowers of most species have five petals, and each petal is divided into two distinct lobes. Roses are insect-pollinated in nature.

This photo was taken just after a typical gentle Irish downpour - locals refer to these steady damp spells as 'soft rain'. It is soft, but also very wetting!

Fuchsia is a genus of flowering plants that consists mostly of shrubs or small trees.

The first Fuchsia was discovered in 1703, on the Caribbean island of Hispaniola, (today it's the Dominican Republic and Haiti) by the French Minim monk and botanist, Charles Plumier. He named the new genus after the renowned German botanist Leonhart Fuchs (1501-1566).

I can spend ages watching the bumble bees busily collecting nectar as they visit each flower in turn. However, trying to catch them on camera in macro mode is not easy. With such a shallow depth of field, anything that moves is immediately out of focus.

Close-Up & Macro Photography (Expanded Guides - Techniques)
This is a great guide for anyone new to macro photography as it's written in a straight forward and easy to understand language.
Buy Now 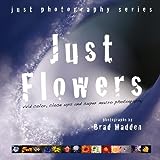 Just Flowers: Vivid Color, Close Ups and Super Macro Photography
Brad Madden explores the amazing beauty of flowers close up with macro photography and you'll see fabulous details like never before! There are over 100 flowers shown in their vibrant colors that they are hardly recognizable as flowers. It's like another world. HIGHLY RECOMMENDED
Buy Now

Focus On Close-Up and Macro Photography (Focus On series): Focus on the Fundamentals (The Focus On Series)
If you don't know how to capture macro shots and want an easy to follow guide with plenty of expert advice, then this Focus On Macro Photography book is for you. You'll learn about composition, exposure and lighting in order to get the best shot possible.
Buy Now

David Busch's Close-Up and Macro Photography Compact Field Guide
David Busch needs no introduction as he's written so many books on cameras as well as several field guides. This guide shows you the techniques you'll need to be able to get great results when shooting up close with any subjects at all. Good clear advice on how to setup shots with tips on lenses and lighting enabling you to get good results every time.
Buy Now

Tulip bulbs are usually planted during the latter part of summer and into fall, in well-drained soils, These spring-blooming perennials can grow anywhere between 4 inches and 28 inches (10 cm to 71 cm) tall.

Probably the best known country for growing tulips commercially is the Netherlands, although it is thought that flower cultivation began in the Ottoman Empire - possibly Persia, Turkey or Iran. The tulip has many species that are also indigenous to large parts of Europe, Africa and Asia.

When one thinks of poppies, perhaps we have in mind the opium poppy fields being cultivated in far off lands such as Afghanistan for the drug trade. Or maybe our thoughts are turned towards wartime remembrance, which uses the red-flowered corn poppy as its symbol on every Remembrance Day, held annually on 11th hour, of the 11th day, of the 11th month.

Poppies have long been used as a symbol of both sleep and death: sleep because of the opium extracted from them, and death because of the common blood-red color of the red poppy in particular.

An interpretation of poppies in Classical mythology is that the bright scarlet color signifies a promise of resurrection after death.

Field of Poppies - A wildflower meadow in Suffolk, UK

The thistle has been the national emblem of Scotland since the reign of Alexander III in 1249. It is also the emblem of Encyclopaedia Britannica.

Thistle flowers are favorite nectar sources of the several species of Fritillary butterflies.

This image was taken with this exact lens. 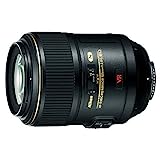 Nikon AF-S VR Micro-NIKKOR 105mm f/2.8G IF-ED Lens
Nikon have raised a few eyebrows with the introduction of this lens as it is the first true Macro (Micro with Nikon) lens to carry image stabilisation, Nikon's VRII vibration reduction. The AF-S autofocus system is a joy to use given that it is silent and very quick for a dedicated macro lens. The focus limiter, which only stops the focus going shorter than 0.5m, improves this speed even further in normal use. A well thought out and put together lens, there is no distortion that can be seen with the naked eye and chromatic aberration is so well controlled throughout the aperture range which a massive 8 stops.
Buy Now

Nigella is a genus of about 14 species of annual plants, native to southern Europe, north Africa, south and southwest Asia. The leaves are finely divided, while each leaf segment is narrow and threadlike.

This ornamental plant has been grown in English cottage gardens since Elizabethan times and is commonly known as love in a mist or devil-in-a-bush. The dried seed capsules are often used in flower arrangements.

Early Purple Orchid - From The Burren

The Early Purple Orchid here was photographed in the Burren in Co.Clare, Ireland where it is a common plant. It is found growing on road verges as well as around the rock formations which make up the geology of the area.

The rolling hills of the Burren are composed of limestone pavements with crisscrossing cracks known as "grikes", leaving isolated rocks called "clints". The region supports arctic, Mediterranean and alpine plants side-by-side, due to the unusual environment.

Native to the Americas, the Gaillardia is a perennial plant from the sunflower family. The plants will tolerate harsh, dry growing conditions, and they can often be seen in full bloom in sand dunes along the seashore.

The caterpillars of some species of butterfly and moth use the gaillardia as an important food source.

Crocosmia is a small perennial genus in th iris family and pollinated by insects, birds (hummingbirds) or by the wind. In the US they are commonly known as coppertips or falling stars, and in Britain as montbretia.

The genus name is derived from the Greek words krokos, meaning "saffron", and osme, meaning "odor".

Not a Flower - Just a Photo To End With!

I'd really appreciate any feedback you have on macro photography or photos in general, so don't be camera shy, and shoot me a smile.