In 1963 I was just a young child. And yet I remember very well that two men, Eric Jackson and Ken Chambers, set out on the epic adventure of their lives.

Both were rally drivers and Ford dealers and they had been challenged to break the record for driving from London in the UK to Cape Town in South Africa - in a new and untested saloon car. Why do I remember this so well? Because Eric Jackson is my dad :)

What happened was this - one day Eric Jackson (my old man) was at a motor auction in his native Yorkshire. He talked to a chap who he knew by sight, a larger-than-life character called George Hinchcliffe, who challenged him to beat a record he had set some years previously - driving from London to Cape Town.

He threw down the gauntlet and Eric couldn't resist the challenge.He contacted Walter Hayes at Ford Motor Company, and suggested that the challenge would be an excellent way to promote the new Ford Cortina. Walter agreed. Ken Chambers was recruited as co-driver, The trip was the supreme challenge covering dangerous areas of Africa, inhospitable territory and unbelievable perils.Would they succeed?

This was 1963. Eric and Ken were driving an ordinary saloon car. They didn't have the modern advantages of GPS, laptops and cell phones.

The Ford Cortina didn't even have air-conditioning.They were both experienced rally drivers but had never undertaken this sort of epic drive before. Eric had been stationed in North Africa during World War 2 and had competed in the East African Safari Rally the year before - but Ken had never been to Africa.

They had never driven together before the London to Cape Town record attempt. There was no service crew or backup system - the guys were completely on their own facing the perils that Africa put before them.And Africa was a very different place in 1963 than it is today.

When they set off from London, Eric and Ken had no idea about the perils they might face.Was it possible that this crazy venture could possibly succeed?

This would challenge even modern-day cars with all the advantages of today's technology. Indeed, it was as long as forty seven years before a three-man team in a 4x4 vehicle challenged the record.

But in 1963, Africa was a very different place than it is today.Eric and Ken had to battle with extremes of temperature, incredibly rough terrain and hostility and distrust. Being interrogated at gun point being accused of spying was the least of their troubles, when you consider that they also had a shoot out with a gang of bandits in the Sudan.

They survived the gunfight without injury but it destroyed their fuel supply and ... their drinking water. Stuck in a remote area, miles from anywhere, they believed that they'd never see their homes and their families again.And even more troubles were ahead.

Petrol in My Blood

In 2013, as he approached the age of eighty nine, Eric Jackson finalized the book he had been writing for over four years.

The autobiography covers his entire, adventurous life - the London to Cape Town record adventure takes up only three chapters of this 350 page book that is illustrated throughout with original photographs such as the ones you see here.

The 'editor' of course, is me. I had previously never realized that one of the tasks allocated to the eldest daughter in later life would be editing her dad's autobiography.

The final, published result is about three hundred and fifty pages - the pieces of paper, press cuttings and memorabilia required to put this book together fill and entire cupboard in my teeny tiny apartment.

For years, DHL would arrive at my house with a parcel, or what my dad referred to as a 'diplomatic bag' containing the latest manuscript, photographs and well, to put it bluntly, scribbles.

Being from Yorkshire, the old man isn't one to put his hand in his pocket and spend money unless he absolutely has to so the 'manuscript' was actually scrap pieces of paper, leaves torn from old diaries and basically anything he could get his hands on (free).

The image above is typical. Considering that he left school at the age of fourteen, his grammar and spelling didn't need too much work but often, the narrative was interrupted by little drawings or diagrams as you can see here.

Then there's be an arrow explaining, sometimes at length, why the little sketch was there. Can you read it? It says:This has nowt to do with the safari it's just some old paper that I had been sketching plans for a trials car many years ago.Considering that his motorsport career ended in 1972, then yes, it certainly was many years ago.Typical!

The Ford Cortina, which started production in the early 1960s was make for twenty years. During that time it satisfied a number of motroring needs. It was a great family car, it was perfect for sales reps and others who drove on business and it excelled on motor sport. The Cortina, and especially the Mark 1 has become iconic and is symbolic of the 1960s in Swinging London. 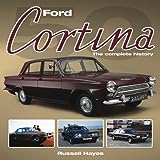 Below you'll see an automatically-generated feed from eBay.Often, there is memorabilia concerning the Ford Cortina - sometimes the cars themselves. If you don't see anything in this feed, call back later.