Woodside is one of the richest places in northern California and Number 17 on Bloomberg's list of the 25 Wealthiest Towns in America.

After the California Gold Rush and the American railroads reached the state around the 1840s-1850s, not only rows of simple worker's houses but also businessman's mansions began to appear around Woodside up to San Francisco. San Francisco has been a port city active in shipping and passenger transport over the water since its foundations and Woodside became a wealthy far-suburb on the San Francisco Peninsula. Today it is largely upscale residential in nature, but located among breathtaking scenery and numerous outdoor activities.

Woodside lies just south of interstate highway I-280 and abuts nearly two dozen state parks and state green space preserves. Between I-280 and California Highway-101 about five miles to the northeast lie a dozen additional suburbs and shopping areas. Between this area and San Francisco are found even more open green spaces, state parks, and retail shopping malls among the cities.

If you have ever watched the nighttime television soap opera Dynasty, then you have seen Fioli when it was used as the Carrington Mansion on the series in opening credits and for some interior shots. The actual mansion is even more opulent than was seen on TV.

The Fioli estate is located near Woodside and is an upcale site for national and state Historic Preservation activities. The property was developed into a magnificent country estate with several gardens, a nature preserve with native plants and wildflife, sunstantial educational programming, and a giant brick mansion. A number of garden and horticulture relatied certificates many be earned in this complex, makking it a community learning center of sorts.

Fioli as a word is a combination of words important to one if its developers (in effect paraphrased, fight for justice, love people, and then live a good life). This edict seems a bit forced when jammed into a single word, but the estate is a marvel, developed to showcase wealth and nature; and the people can enjoy it as a living nature museum now.

The owners, the Bourns, created a separate world here, where they felt safe from earthquake, crime, and a sort of nuisance of the industrialization of San Francisco. It was a lavish refuge from the city and the family's work in ownership of the Spring Valley Water Company. They made it a beautiful place with the help of well known architects and landscape designers. The next owners, in the late 1930s, were the Matson family of Matson Navigation Company. This shipping company became a vehicle for opening up sea travel to Hawaii for vacation and business purposes, followed by hotel development on the islands. Matson shipping is still a large venture today.

This country estate was built with wealth provided from a local gold mine in 1916 during WWI, about a decade following the San Francisco Earthquake. Apparently,after the earthquake struck, San Francisco's wealthiest residents moved 30 miles south to this area and built their mansions, feeling protected from future quakes. Several wealthy families have owned the estate, finally donating it to the State of California in the mid-1970s.

Fioli is listed as both a California State Historic Landmark and a US National Historic Place.

California Landmark Number 209 and US National Landmark Number 77000338, the Our Lady of the Wayside Church was designed by a 19-year-old architect, Timothy Pflueger, as his first work. He went on to help design many notable San Francisco area theaters during the Golden Age of Hollywood as part of the partnership of Miller and Pflueger, Architects. 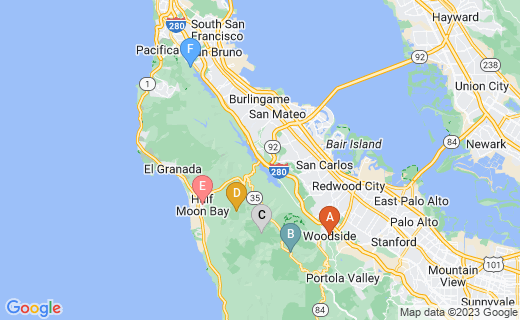 In the spring of 2011, California State officials announced the likelihood that 70 of California's 278 parks, beaches and state and national historic areas (about 25% of the total) would be closed to the public by July 1, 2012 in order to cut the state budget deficit.

However, a bill passed the California Assembly that would allow nonprofits to more easily take over these venues: Assembly Bill Number 42. Since 2011, California succeeded in keeping most of its state parks open with the help of nonprofit corporations and volunteers.

According to SImplyHired.com, job search and trending site, Woodside has experienced a 35% increase in advertised jobs from November 2012 through November 2013 alone. Something of a Job Boom appeared from 2012 - 2016.

Employers Advertising the Most Jobs

Increasing numbers of jobs are advertised for companies involved in the aerospace and defense industries. These positions include many listings with the following companies: