Pearl City is the fastest growing place in Hawaii and Honolulu County (Oahu Island), but it is not yet incorporated. Pearl City grew in residency by 4% from 2008 - 2009, to over 10,000 households and approximately 31,000 people.

The community ls situated about 9 miles northwest of Honolulu and along the north shore Pearl Harbor, where many World War II Memorials draw tourists every year. The community encompasses just under 6 square miles of property that is filled with residences and commercial enterprises that include several shopping centers, but also with several official playgrounds and parks.

BusinessWeek highlights Pearl City as one of the 52 fastest-growing places in the US in 2010 and the fastest growing in the State of Hawaii. Part of this fast growth is attributable to increasing numbers of job listings associates with the US Navy (530% job listings increase) and Air Force (over 2300% increase) at Pearl Harbor, including government contractors. Several; of the top employers listing jobs, as seen below, have openings on the military bases at Pearl Harbor.

In 2009, the readers at StoodThere.com voted The USS Arizona Memorial at Pearl Harbor the Number 8 Greatest Place to Stand (for pictures) in America. The USA placed a memorial over the sunken USS Arizona to honor almost 1,200 people that gave their lives on December 7, 1941 as we entered WWII.

The southernmost portion of Pearl City extends into Pearl Harbor toward the US military bases maintained there and forms a residential area for military personnel and families.

The peninsula community is gated and guarded, withlarge expanses of green space. All homes are faily near the waterfront. Historic homes from the 1930s are closest to the water and the peninsula and Pearl Harbor bases are the sites of many places listed in the National Historic Register of the US. 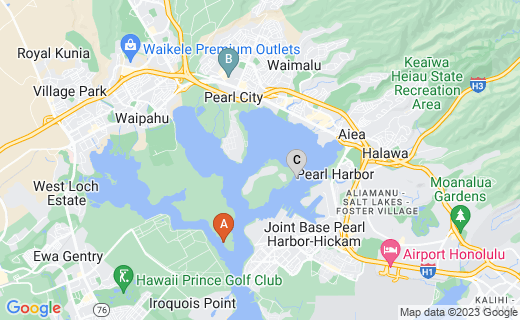 Housing Costs After 2012 - Lower than Expected

The Volunteer Internship Program allow Hawaiians on Unemployment to intern at local businesses for eight weeks and still receiving UI Payments. They may receive job offers through these internships and certainly will accumulate experience for their resumes. Interested job-seekers can apply at www.hirenethawaii.com or www.hawaii.gov/labor/ui/vip.

Several pet clinics and pet hospitals are also located in Pearl City and the surrounding area.:‎

The top sales producing companies in Pearl City are involved in groceries and general merchandise, commercial construction, and lawn and landscaping services:

The Waikele Center operates its own Trolley Car system to shuttle customers to and from Waikiki, about 30 minutes away. The mall is a regional open-air shopping complex immediately west of Pearl City at Interstate H-1 and Paiwa Street. It offers a combination of small retailers and Big Box stores: Lowe’s, K-Mart, Office Max, Sports Authority, Old Navy, Borders, Starbucks, Chili’s Grill & Bar, McDonald’s, and other fast food. A number of professional services are located in or adjacent to the center as well.

The property under the center was a sugarcane field before the mall opened in 1993. Today, a number of buses, trolleys, shuttles, and other transportation makes it easy for tourists and residents to enjoy the mall and spend their discretionary income. In addition, the Waikele Golf Club surrounds the shopping center on three sides. Wakalena Golf Course is less than one mile to the south. Waikele Center is a meeting place that boosts the local economy.

Pearl Ridge Center was opened as Pearlridge Uptown in the early 1970s and soon added another mall as Pearlridge Downtown to total two enclosed malls connected by a monorail service.

In between the two malls is Sumida Farm, the top grower of watercress in Hawaii. All of this and additional malls lie along the main thoroughfare through Pearl City: Kamehameha Highway. Pearl Ridge features the one and only monorail transport system for customers on the island, traveling between the malls and allowing passengers to view Pearl Harbor and the USS Arizona Memorial.

Besides a different array of stores than any of the other malls on the highway, Pearl Ridge also features 2 food courts, 12 full-service restaurants, a mini-golf course, 2 gaming arcades, 16 theaters, an Emergency Medical Clinic, and other services. 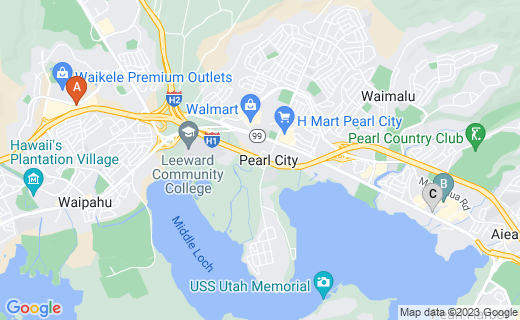 Nearby Technical and Vocational Schools in Honolulu

The US began using Pearl Harbor in 1887 and developed it into a US Naval Base in preparation for World War I. However, World War II began for America when the naval base was attacked on December 7, 1941 by the Japanese in a sneak attack that coincided with Japanese envoys meeting with US officials in Washgonton DC.

Two hundred US military aircraft were destroyed. 3,000 US Navy and other armed forces people were killed or injured. The USS Arizona (see above), was a 608-foot battleship used in WWI, but it sank in just 9 minutes.

A total of 1,177 Navy sailors and US Marines died on the Arizona. Today, the ship's deck is 6 feet below the surface of the harbor, their permanent burial ground. The USS Arizona memorial stands over and across the ship. US Navy launches shuttle people to and from the memorial, a museum, and a video presentation.

Today the military base is known as Pearl Harbor-Hickam; Naval Station Pearl Harbor is the US Navy's busiest port, filled with military vessels and a large recreations services division for servicemen and women and their families. Hickam Air Force Base is co-located at Pearl Harbor.

The Pacific Aviation Museum Pearl Harbor on historic Ford Island occupies World War II-era hangars that still bear the scars of our nation's first aviation battlefield. It's the newest attraction among the Pearl Harbor Historic Sites and a must visit for