It's My Retail Life

I work retail. Worse than that I am a cashier and I actually like it! Some of you reading this will probably pity me over that simple statement while others will say that they could never do what I do. In light of the many horror stories that often accompany the retail worker’s life I completely understand where this feeling comes from. However, I actually enjoy working with and helping people from various walks of life. Needless to say I enjoy working with some more than others. But like anything in life it has to be taken with a grain of salt so to speak and you have to look for the humor in many situations. Sometimes that humor is easier to find than others. What happened today is a prime example of that.

I was working in the hardware section of our store. It can get kind of dead there at times and be crazy busy at others. I don’t know enough about the hardware department to really be useful except to ring people up for small purchases and direct them to the regular sales people. Occasionally there are some funny moments though and today’s incident afforded us quite the laugh. I had just returned from my lunch break and was waiting at the register for a customer to help when an older Asian looking man walks up to me and says in clear English “I want to ask you a question.” So I said “Okay, what do you need?” To which he replied “Where is the bathroom penuhgrgdfh?” Clearly I didn't know what a bathroom penuhgrgdfh was so I politely asked him again what he was looking for. Well he repeated the same thing several times only this time accompanied by a strange up and down gesture with both hands about the level of his waist band. Still at a total loss after several attempts to understand him I asked if he was looking for the bathroom. He indicated that he was so I gave him directions to the nearest one. Well he happily went off in that direction and I assumed that would be the end of it.

So in his absence I told my co-worker Beverly what had transpired and we had a good laugh over the strange hand gesture thing he was doing. In fact we were still laughing when not a moment later the same gentleman reappeared and now asked the two of us again for this mysterious item. This time still accompanied by the same unusual hand gesture only now it sounded more like he was asking for a bathroom planer. Being a sales person in the hardware department Beverly thought it seemed reasonable that he could be looking for a planer… perhaps even one for his bathroom if he was remodeling it. However this suggestion didn't seem to be to his liking. Well finally between the two of us we figured out that all this time the poor man was desperately looking for a simple toilet

plunger. Who knows how urgent the need for that common household item might have been and to think I almost thwarted his efforts to unclog his plumbing by inadvertently misdirecting him!

Was this situation Funny or NOT?

This time however Beverly sent him in the right direction and he promptly picked out the first one and brought it back to the register. We were still in stiches over the whole situation when he returned to the check-out stand. Beverly (the little rat) made me ring him up since she couldn’t keep a straight face. She wasn’t even the one that had sent him the wrong way in the first place. It was me! So, I took a deep breath, wiped the smirk off my face and calmly (on the outside anyway) rung up his purchase of the illusive bathroom plunger. I did at least apologize for sending him the wrong way letting him know that I honestly thought he was asking for the bathroom. He was very gracious about it and seemed none the worse for the wear. When he left however we were right back to giggling as there were no other customers present at the time. Our giggling got so bad it even caught the attention of another salesman Jesse who made us tell him the whole story. This naturally only brought on more bouts of laughter but was well worth it. To the point that now I just had to share this wonderful anecdote with all of you. In retrospect the hand gesture he performed numerous times did sort of resemble the motion that one makes when using a plunger but in the absence of the actual word it made no sense to me at all. The poor man’s toilet probably needed a good plunging whatever the problem was but I honestly thought he just wanted to pee!

It's My Retail Life by Daelyn H. Appleton
This work is licensed under a Creative Commons Attribution 3.0 Unported License. 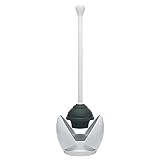