The Greying of American Nurses

State Nursing Centers in the American Midwest concluded that 34% to 40% or more of the number of RN-licensed nurses working in 2011 and 2012 would be retired by 2023. With a large number of nursing positions already vacant in the United States and travel nursing agencies recruiting health professionals move into some area of the country to work at higher rates of pay, a selection of perks that included mortgage payments or free rent, and many others, RN jobs look to be on the increase past 2020 and onto to 2050 or longer.

The Michigan, Minnesota, and Ohio State Nursing Centers offer especially interesting data related to this trend, as shown by the text and video information below.

Effective recruitment methods and incentives need to developed to solve our nation's increasing nursing shortage, especially the growing shortage in nursing faculty. Across the nation, nurses say that faculty positions pay significaintly less than do their hospital jobs, which is negative incentive. While America experiences these types of workforce problems, international news sources report that the same workforce shortages are affecting other nations as well.

The 2012 survey by the Michigan Center for Nursing showed some interesting results:

Ohio Center for Nursing and the American Nurses Association

During the spring of 2013, over 600,000 RN job vacancies were listed across all Internet sources in America. These included registered nurses, nurse practitioners, and nursing instructors, the last being the very shortest in supply. All of these RN position listings have increased by more than 21% from Feburary 2012 to May of 2013. As nurses retire every month, openings increase as well.

The largest numbers of openings were posted for areas in Texas, including Houston, Dallas, San Antonio, and Austin. The next largest clusters of jobs were listed for Phoenix and Tucson, Arizona. Following these metro areas were Atlanta, NYC, and Seattle.

Nurse Practitioners, who also hold the RN license, generally are paid higher salaries among nurses, as much as $80,000 and higher. One Nurse Practitioner listing in Los Angeles offered $300,000/year for working 12-hour overnight shifts from 8 PM - 8 AM at a rate of three days on, three days off.

The numbers of job postings for "Nurse Practitioner" have increased almost four-fold since January 2012. Also called NPs, these professionals sometimes fill the job title of Physican Assistant or Physician's Assistant. 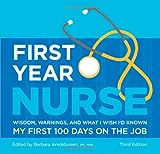 First Year Nurse: Wisdom, Warnings, and What I Wish I'd Known My First 100 Days on the Job
Buy Now