In northern Hennepin County, Maple Grove is a fast-growing suburb in the northeastern corner of Minneapolis. Maple Grove, Minnesota was named among the Best Places to Live in 2008 by Money Magazine and in early 2010, BusinessWeek analysts found it to be the fastest growing city in the state of Minnesota.

The Winnebago Nation first inhabited this area of the county, having been moved to there in federal relocation initiatives from Wisconsin. However, white settlers arrived around 1851 and began developing this territory.

The lumber industry thrived, so sawmills and general stores soon made up the bulk of the local economy,1850 - 1900. As the settlement grew into a town, additional entertainment emerged: dance halls and horse racing tracks. Maple Grove was becoming a new urban center. 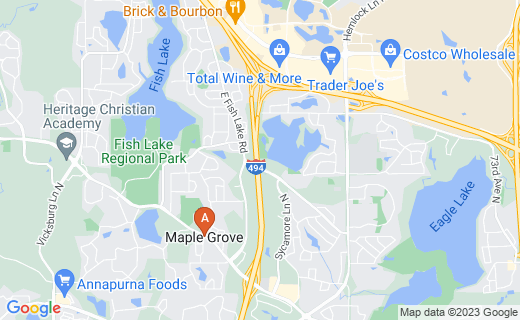 Farming and dairy production added to the local economy, but the railroads came through and required a train depot to add modern industrial transportation. Increased shipping and passenger transportation venues brought more people and businesses to the area. Further, waterways around the local lakes provided additional shipping lanes and new businesses and residents moved to the area as business continued to grow.

The residential population grew so quickly that it expanded from just over 1,700 in 1950 to 38,700+ in 1990. By early 2006, the population reached 55,000+ and by 2008, Maple Grove supported just short of 60,000 residents. Continued growth resulted in the state's first Lifestyle Center in Downtown Maple Grove. It is a combination of business, work, transportation, and residential opportunities. Today, quick transportation is available between Maple Grove and downtown Minneapolis several times daily and Maple Grove continues to grow.

The Grove is another shopping center that includes the North Memorial/Fairview hospital complex on I-94.

Maple Grove supports more retail commercial space than all other cities in the state, except Bloomington and its Mall of America. With ongoing commercial development, Maple Grove aims to take over the Number One spot.

Many job openings are listed near Maple Grove in Minneapolis, Saint Paul, Eden Prairie, Minnetonka, Bloomington, and other communities within a 25-mile radius of the suburb.

Entries in bold text are among the companies listing the greatest number of jobs in and around Maple Grove as well (see column, below right).