Economy and Travel in America's Historic Triangle in Virginia

The Founding of the United States

America's Historic Triangle is located in Virginia and encompasses three towns important to the founding of America as a New Nation.

There on the Virginia Peninsula, the national historic triangle area contains Jamestown, Colonial Williamsburg, and Yorktown. Travel and Tourism combined comprise a major contributor to the local economy, with growing numbers of restored historical attractions connected by the local Colonial Parkway in James City and York counties and the City of Williamsburg. Anyone interested in pre-Revolutionary settlement of the Atlantic Coast, the American Revolution, the US Constitution, and the American Civil War will enjoy a vacation in this triangle. The region is full of scenic countryside as well as living history museums and working farms positioned among growing residential and commercial growth and top universities.

On the Google Map below, we see that the three corners of the Historic Triangle are accompanied by US Naval installations and National Parks. This places the region of the triangle in an economy supported by Travel and Tourism (accommodations, dining, retail, tours, and others), Government, Government Contractors, and related industries such as Information Technology (IT). 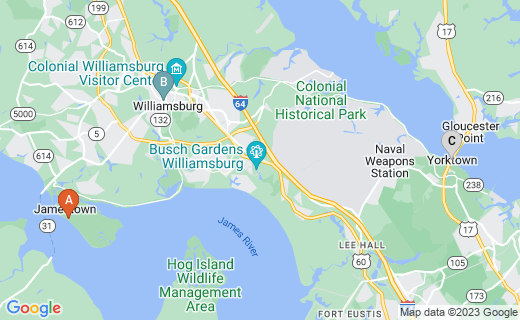 Yorktown VA is the point of the triangle farthest east. It is connected by the Colonial Highway to Jamestown and WIlliamsburg. This is a scenic road approximately 24 miles long, operating between the York River and the James River. As a part of the WPA during The Great Depression, this roadway was built to conserve natural landscapes of native plants as well as native and migratory wildlife. Through its length, no commercial enterprises may be found, but forests, rivers, fields, and historic landmarks are present.

The three-lane road is well maintained, requires a maximum speed of 45 MPH, and reminds me of roads in the 1960s before freeways became popular. Without a preservation focus, drivers might expect to see Burma Shave signs. 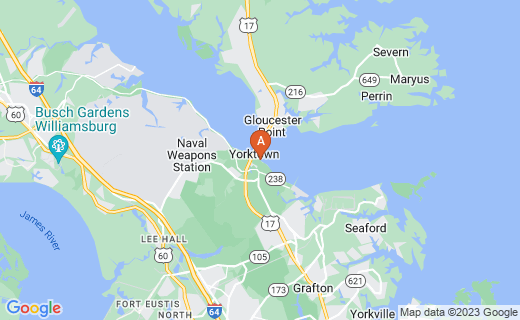 The Battle of Yorktown at the end of the Revolutionary War was a miracle of sorts. The National Park Service tells us that the patriots numbered only 9,000 against the British 21,000. However, 25,000 French troops on land and sea helped America to win. Without the French, the patriots would have been outnumbered by over 2.3 to 1.

The National Parks Service sees to it that the Battle of Yorktown is reenacted for the education of school, groups and tourists. It is quite a sight and helps visitors to remember the hard parts of America's beginnings. Independence Day is also celebrated in the park, along with a number of other events. More information is found at the links below.

Jamestown, located on the James River in Virginia, is at the other end of the Colonial Highway from Yorktown. It is here that the first Virginia settlement of English immigrants began on the Atlantic Coast of the New World.

books and an analysis on the harrowing life the settlers of Jamestown led, please visit CBS's The Real Story of Jamestown.

Most of this city is dedicated to the early history of the USA and the preservation of that era. As Colonial Williamsburg, the city is host to multitudes of tourists, as well as to college students at William and Mary's located on a main street in town.

College of William and Mary

The second oldest college in the country, William & Mary is also on the list of Top 100 Best Values in Public Colleges and universities in 2011, according to Kiplinger's Magazine. In fact, William and Mary is Number Four out of 100.

The research ongoing at William and Mary is important to the nation and to job creation in the near future. Education is privded in a number of undergraduate programs, with graduate programs in useful fields as law, business, education, and US Colonial History. Dual degrees in partnership with other colleges are also available.

Students have their own pre-graduation tradition called "The Triathlon." It is a physical event that includes jumping over the wall of the Governor's Palace in Colonial Williamsburg after closing time, streaking through the Sunken Garden, and swimming in Crim Dell pond (see photos of the famous bridge). See the Facebook Page for details and the links below for more college information.

Healthcare and IT Professionals Demand Rises

Despite its historical tourist attraction persona, Williamsburg is in need more of Healthcare and IT Professionals than of those in Travel and Tourism. However, a need still exists for managers, assistant managers, salespeople, and hotel and food service staff.

Colonial Williamsburg at Christmastime sees its hotels often booked two years in advance and business is good throughout the year. The College of William and Mary draws increasing numbers of students and their families to the area, increasing the need for additional service positions most of the year.