Hattieburg, Mississippi is in an interesting location, because it lies at the intersection of a transportation hub at I-59 and US-98, and others; but also because the state's labor department is named the Mississippi Department of Job Security.

The job security aspect places emphasis on development and retention of jobs and workers, rather than on unemployment services. As a college town that creates ongoing new jobs through its schools and businesses, Hattieburg is on the Forbes.com Top 20 College Towns, having increased jobs consistently overall during the recession years of 2008 and 2009.

A substantial portion of AARA Stimulus Job funding has been set aside by the state for Green Jobs and development, a progressive move. Mississippi Stimulus included the ARRA funding amount of $2.8 Million to the state.

Funding in Hattieburg accounts for projects that involve Hattiesburg Public Schools, the justice system, sidewalks, and water treatment, especially from November through December 2009.

Job listings have increased overall in the Hattiesburg Metro Area since 2009, featuring the most openings in Retail, Healthcare, Restaurants and Food Service, and Customer Service in a variety of fields. Truck Driving has added many job openings as well. 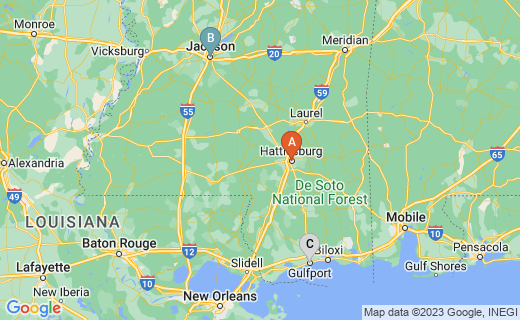 Hattiesburg is home to the renowned University of Southern Mississippi as well as several other institutions of higher learning. The city is also home to a number of cultural attractions, festivals, and other special events.

Hattieburg has won numerous recognitions and awards, including recognition as a Best Retirement Community from Where to Retiremagazine, in part for its affordability. At the same time, National Geographic recently named it to the Top 50 Adventure Towns, so it's not dull at all.

The city has developed an artistic flair in its constantly developing Historic Downtown District, especially through its architecture, arts shops, and galleries. Popular attractions include the local train depot and the Historic Saenger Theater. A developing downtown area and well known colleges and universities help a city to offer good jobs and a higher standard of living even during a recession.

This city has another attraction that is a one-of-a-kind in the state. This is Longleaf Trace, the state's first and only Certified Rails-to-Trails Conservancy Project. It preserves history as it heps maintain the environment. The University of Southern Mississippi provides the gateway to the project, along with bike rentals, maps, and information about the 42 miles of trails.

US Veterans and others will enjoy the local Mississippi Armed Forces Museum (free admission) to the immediate south of Hattiesburg, offering 1,000s of displays from American military history and life-sized dioramas. World War I trench warfare is one of these life-sized fantastic displays.

Hattiesburg was settled beginning in 1882 by William H. Hardy, a lumberman and civil engineer that moved into the area. With him came Irish, English, and Scottish settlers that left Georgia and the Carolinas to harvest the pine forests of the Hattiesburg region of Southern Mississippi. They may have traveled for some time along pathways that became I-77 in the Eastern US. Given several names after incorporation in 1884, Hattiesburg stuck, since it was the name of Hardy’s wife Hattie.

The Southern Railway System came through in 1884 from Meridian MS an on through to New Orleans. Pine timber became a hot commodity after this transport system was put to use. Mills and naval stores, and turpentine plants arose quickly. Additional rail lines came through by 1897. These lines constructed a deep water harbor and the City if Gulfport as well, increasing businesses and populations from Hattiesburg to New Orleans.

World Wars I and II brought the rise of Camp Shelby, the largest base east of the Mississippi River, and home to the popular military museum. After WWII to the 2000s, Hattiesburg continued to develop in transportation, shipping, retail, food service, and healthcare sectors, as the University of Southern Mississippi grew in stature and importance. Cultural and preservation societies added other benefits to residents and visitors while maintaining the history and charm of the city and environment. 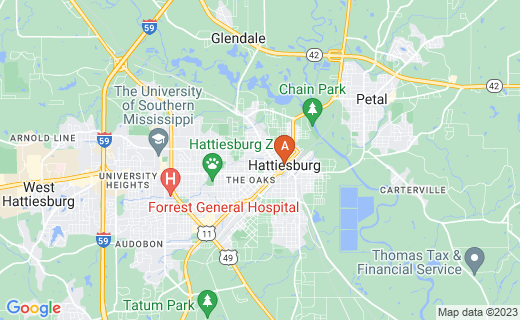 The job market in Hattiesburg and the rounding 25 mile radius has improved, as shown by the data below that is provided by Indeed.com and SImplyHired.com, which collect all job listings from Internet sources. Additional jobs not appearing on the Internet are not included here.

It has been asserted in the past that Hattieburg offers only waitressing jobs at inconvenient hours and such is not the case. The largest numbers of jobs are available in

Job categories denoted in bold print are those that have been already in high demand in daily job listings 2010 - 2012 and 2014.

School in and around Hattiesburg, which make ti the college town that it is include: