Live in Covington, Commute to Cincinnati and Save Money

Queen of the Ohio River, Cincinnati, Ohio is located at the Southwestern tip of the growing Ohio Space Corridor that ranges up through the Ohio River Valley to Dayton and even Columbus.

Cincinnati shows increasing job listings and economic wealth since the mid 2000s. However, its cost of living is a bit high: a 91 index compared to the 100 national average, according to Sperling's Best Places online. Fortunately, we have an excellent alternative straight across the river in Kentucky.

Many workers are moving to Covington, Kentucky across the river and saving money by commuting to their Queen City jobs. From city center to city center, the distance between these sister cities is only 3 miles.

Kiplinger Magazine recently found that Covington is the 8th Cheapest Place to Live in America.

A continuously improving city, Covington offers an Arts District, the Historic Downtown, and even a Wedding District for planning and implementing affordable weddings.place to live, considering economy.

Kiplinger Magazine recently found that Covington is the 8th Cheapest Place to Live in America.

Travel and Leisure Magazine names the Covington-Cincinnati Metro Area's Cincinnati/Northern Kentucky International Airport the Best Regional Airport in North America in 2011 and Number One in Customer Service by SkyTrax at the World Airport Awards. Finally, it was named the Safest Airport In America. Especially for travelers and convention interests, the Covington bed tax for hotels/motels is far cheaper than in Cincinnati.

The Cost of Living Index for Covington is 85 per Kiplinger Magazine and 83 according to Sperling's . Property taxes are lower in Covington than the national average and median home cost is lower, at $98,700 per Sperling's .

Workers earning sums of $40,000 to $99,999 annually also outnumber national averages by 2 to 3 times. Thus, cost of living is lower, while earnings are higher. Covington may be a perfect place to live, considering economy.

The Covington-Cincinnati Metro Area's Cincinnati/Northern Kentucky International Airport has been recognized as the Best Regional Airport in North America and Number One in Customer Service.

Attractions are Great on Both Sides of the Ohio River 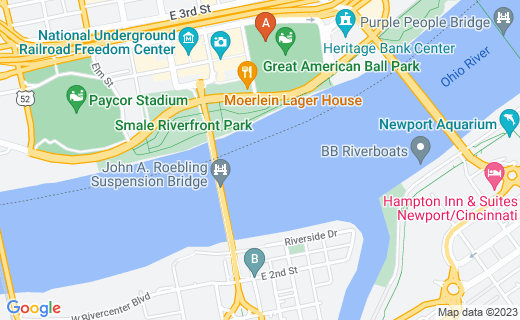 The famous Mike Fink's was a fine dining restaurant specializing in seafood on the Ohio River on the Covington side.A new investment group is refurbishing and plans to reopen the historic facilities.

Originally an oil hauler, it was refurbished for restaurant duty and renamed after the notorious Mike Fink of the Ohio River.

This character was a man that hauled keelboats from the Ohio all the way to Lake Erie and was known as a practical joker and accurate marksman, going so far to perform shooting tricks. Born at Fort Pitt, he was also a contemporary of Davey Crockett, and not one to confront or insult.

Although it was refurbished in 2012, the restaurant on a boat has been a hit with visitors for decades and soon to reopen to greet them again with the best in seafood.

In the mid-1980s, this was my first experience with a raw bar and I came away quite pleased. The menu included meat, seafood, and pasta entrees in addition to the raw bar and was always more popular than the McDonald's riverboat restaurant on the Cincinnati side of the river. People crossed the bridge to Mike Fink's.

Mike Fink's is still here on the Ohio River and the fast-food paddle-wheeler is long gone. Fink's moved a couple of miles east along the river to the owners' collection of other riverboats, a site for guided tours and dinner cruises at BB Riverboats in Newport near the riverfront aquarium.

Some of the items I enjoyed on the raw bar at Fink's have included Alaskan King crab, South American prawns, Blue Point oysters, Gulf shrimp, and Cherrystone clams.

Open since 1968, the Mike Fink was included on the National Historic Register of Buildings and Places in 1981. 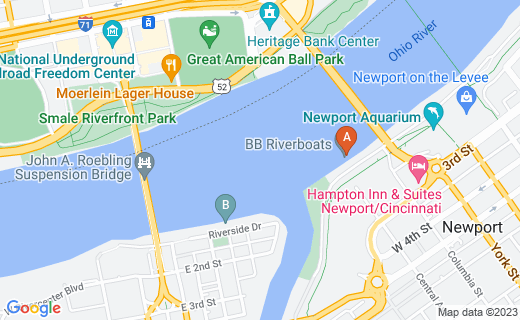 New home of the Mike Fink.

Numbers of job listings in the Cincinnati-Covington Metro Area increased from a low point in the Great Recession up to 26,000+ in early 2017.

Numbers of listings reached high points in 2010 and 2011, fluctuated, and began a new upward trend during Autumn 2011. This increase in jobs advertised continued 2012 - 2014 and surged again through the beginning of 2019.

IT and Aerospace related jobs, especially at GE Aviation, increased most rapidly..

Healthcare, Transportation, and Manufacturing in Autos, Aerospace, and Foods Industries continue to increase.

In the Northern Kentucky and Cincinnati Labor Market Area, look for jobs at the following companies who can use bilingual workers: 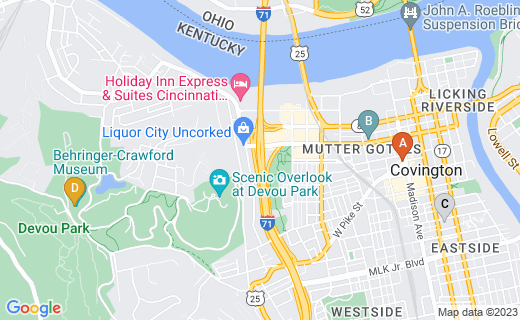