Whales and Ice Cream on the Pacific and on Film

The City of Carmel sits on Carmel Bay at the Pacific Ocean, off both Highways 1 and 101. It is much nearer to Highway 1 in beautiful Monterey County in Central Coastal California.

The Monterey Bay Aquarium here was used as the fictitious Cetacean Institute, where the humpback whales George and Gracie lived for a time in Star Trek IV: The Voyage Home.

The aquarium gained notoriety during the filming and the first run of the film. Today, the aquarium is even more popular. Programs and exhibits have expanded to accommodate an increasing tourist and local attendance.

Back in 1986, many of us were trying to find the film's Cetacean Institute, before the days of the Internet and free cross-country phone calls. People were frustrated, but media publicity (and a WATTS line) finally caught up to them with the correct information.

Another celebrity that makes Carmel - or Carmel-by-the-Sea - famous is Clint Eastwood, who was elected mayor, also in 1986 and served two years.

In news reports, I heard that at the first Carmel City Council Meeting under his administration, a vote was called on approving a specific flavor of ice cream to be placed for sale in the community.

Supposedly, Mayor Eastwood refused to have the measure even discussed, feeling it a waste of council time. However, I found that a law was on the books that ice cream could not be sold or eaten on the public streets of Carmel and that this law was eliminated during his term.

Carmel is such an interesting and colorful place, with lots of history and scenic beauty!

Carmel on the Pacific Coast 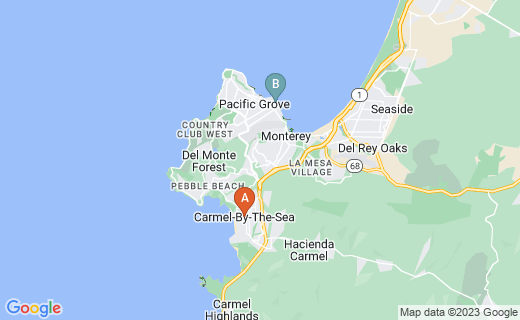 Carmel-by-the-Sea Began as an Artists' Community

Local Art Installations You Do Not Want to Miss

A third feature in Carmel that makes it unique is the Mission San Carlos. Historically important, this mission church is also Number 22 on the list of Greatest Places to Stand in America, chosen by readers of StoodThere.com in 2009.

The mission served the residents of Monterey in 1770, then of Carmel after 1771, especially local Native Americans, and offered what would become the State of California's first library.

Native Americans of the mission San Carlos Borromeo de Carmelo belonged to a number of separate bands within the Costanoan Language Group that contains eight indigenous languages living on the Monterey Peninsula. These indigenous groups helped to build many Catholic Missions in this part of California. Their history is divided into section periods on the following website: 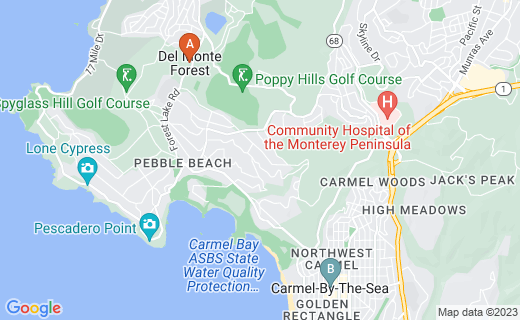 Carmel is adjacent to Pebble Beach to the west, an upscale resort area that is famous among Californians and the world for golf and golf tournaments as well as shopping. However, perhaps the most spectacular feature of the community around Pebble Beach is the scenic route called 17-Mile Drive.

This is a scenic byway next to the Pacific Ocean, full of natural attractions of geography, native plants, and local native wildlife. Some of the examples of plants and wildlife are endangered, threatened, or vulnerable by category and the latter includes the specific species of the 250+-year-old Lone Cypress on 17-Mild Drive. This Monterey Cypress grows only two places in the world - both here in Monterey County, on 17 Mile Drive and at Point Lobos to the south.

Pebble Beach itself is famous for golf courses and golf tournaments. Our own Jack Nicklaus from Ohio loves the Pebble Beach course, although Pebble Beach operates four additional courses nearby in California. Each course is part of a resort locale, with accommodations, dining, and shopping.

Carmel has been chosen as a top Girlfriend's Getaway by southern Californians. See the website at Carmel California. If you go to the downtown district, for any activity, you can enjoy the free trolley car around town and to Carmel Beach as well as the San Carlos Mission.