10 Reasons Why You Should Teach English in Thailand

As an English language tutor in Thailand, I can honestly say that this country rocks to live in and there are many reasons for this. Too many reasons to list but in this hub I have compiled the top 10 reasons why teaching in Thailand is a wonderful experience both for new teachers just setting out and seasoned veterans.

So if you have ever contemplated teaching English in Thailand then my advice to you is 'do it' because there is something for everyone in this country from the delicious food to the cheap alcohol. This country caters to every taste. Anyway, let's get to the 10 best things about teaching in Thailand. Enjoy!

Forever illuminated by sunshine, Thailand is one of those wonderful places where you could permanently walk around in shorts (apart from the times you are teaching, of course!) if you so desired. Thailand is known to have 3 seasons - hot, hotter and hottest! There is of course the rainy season as well where you get to see some impressive storms and lightening if you are in to that sort of thing. So for those of you who are fed up with the 'weather' in your own country, teaching in Thailand is definitely a good option to consider.

Thailand - The Hub of South-East Asia 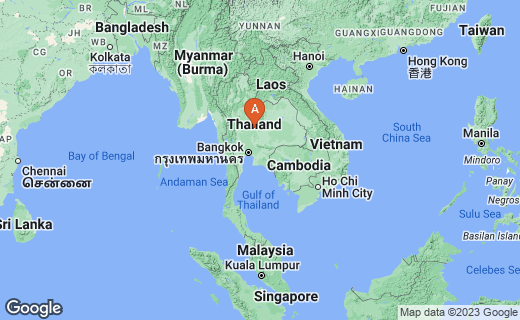 Thailand - The Hub of South-East Asia

Thailand, because of it's central position, is surrounded by all the other south-east Asian countries which means it has naturally become the hub for not only Asian travelers but travelers from western countries as well. This makes Bangkok an extremely fun place to live, not only for shopping and eating out but also for the night-life. Being the hub of south-east Asia means that Bangkok receives travelers from all over the world, in all seasons and this is great if you are someone who loves meeting other people from other cultures. Quite often, travelers will stay here for 6 months to teach English and make a little more money before continuing on their travels throughout Asia. This is one of the main reasons that so many choose to teach English in Thailand first before moving on elsewhere.

When I first came to teach English in Thailand, I was amazed by the quality and quantity of Thai food. Every where you look there is a street stall selling food, from curry to fried fish or my favorite, grilled pork! Not only is the food extremely cheap when compared to western prices, there are so many different tastes catered for. Spicy, sour, sweet, salty - you name it, they got it. A plate of curry costs around $1.20 which is unheard of in the west and where ever you look, there is food so it is both delicious and abundant in supply.

Teach English in Thailand with these Sweet-Faced Kids!

One of the main reasons I love teaching in Thailand is that the students are so lovely here. Granted, they can be naughty in a cheeky way, but otherwise they are such lovely children and great fun to teach because all they ever seem to want to do is play games and have fun. This means that teaching in Thailand is far easier and much more fun than teaching somewhere like let's say Japan. Lessons are not serious affairs and as a teacher in Thailand you should concentrate more on games that while fun, also allow the students to improve their English skills.

As I mentioned earlier, food in this country is extremely cheap and that in itself is a huge positive, but accommodation and transport are also very very cheap when compared to western standards.

In Bangkok which is where most teachers are based and where in my opinion it is best to start teaching, the majority of people, Thais included, live in apartments or condominiums. The average price of a room is around $160.00 a month give or take for an okay room with air con in most cases, and when you consider the average salary here for an English teacher is around $1200.00, that leaves you with $1000.00 which is more than enough to get by in Bangkok. Bear in mind though, that at the above price, you might be located a fair distance from the center where all the action is. Transport, thankfully, is cheap so this shouldn't be too much of a problem!

Like food, transport in Bangkok is both cheap and abundant, for example, there are around 6 forms of public transport you can use to get around, all cheap. There are:

Motorcycle taxis seem to be everywhere. You can either wave one down or you'll find motorcycle taxi stations at various points in every street. Cost wise they are extremely cheap. You can expect to pay 20-40 baht ($1.30) for a 5 minute journey and they can zip through traffic which is notoriously bad in Bangkok.

Songtaos drive along the roads picking people up and each one has a designated destination which you check by asking the driver. A songtao will cost about 6-10 baht which is next to nothing.

Taxis in Bangkok are a dream compared to those in the west, in that they exist in abundance and can be waved down. All taxis use meters although there will be the odd time that a driver may give you a flat rate with no meter. In these cases just say no and wait for the next one because they usually overcharge in that case. Once again, taxis are ridiculously cheap. I once traveled 25 Kilometers and paid only $6.00!

Minivans stop at the bus stops and are also very cheap. They usually charge around $1.00 for the average commute.

Buses cost about the same as a minivan and come with both air conditioning and non-air conditioning as well as being abundant in supply. Once you get used to the numbers, traveling by bus becomes easy peasy and cheap as chips.

Tuk-tuks are a joy to travel in because of the added thrill. They zip around Bangkok like little race cars and tourists often love taking a ride in them, just for the thrill of it. Tuk-tuks however, are a little more expensive because you usually have to haggle with the driver as he'll offer a price. It is best to always haggle and bring the price down because they are used to tourists not caring about the price and will therefore add on a little extra.

Some of the Best Beaches in the World

Thailand has some of the best beaches in the world, both in terms of beauty and diving locations.

Did you ever watch the movie 'The Beach' starring Leonardo Di Caprio? Well that was all filmed in Thailand and if you want to good idea of what Thailand is like, I recommend you watch that movie as it is filmed in both the city and on some of the most beautiful islands. When you teach English in Thailand you quickly realize national holidays are in abundance. This gives you lots of time to explore those island paradises a hop, skip and a jump away.

When I first began to teach English in Thailand, I was amazed by the level of hospitality shown towards me and as a result I fell in love with the place. Thailand is traditionally known as 'the land of smiles' and for good reason, because where ever you go here people are always smiling and friendly towards you. Of course there are exceptions, but for the most part Thai people are always willing to help and usually greet you with a warm smile. I have lived here for 6 years and not once have I ever had any kind of dispute with a Thai person. They frown on fighting and arguing in public, so during your stay here you will rarely ever see angry Thai people.

If you love shopping, Bangkok is the place to be as there are shopping malls literally everywhere you go. The shopping malls here are huge and beautiful to behold. I often enjoy just taking a walk through a mall to kill time because there is so much to look at. The markets here are extremely cheap and abound all over the city. There is even a multi-floor shopping mall dedicated solely to electronics, from computer hardware to DVDs and games which are incredibly cheap.

This must be one of the most fun festivals in the entire world because for 1 week from the 12th April - 17th the entire country comes to a standstill to celebrate Thai new year, by throwing water over each other and basically just having a ball.

Pickups roam the streets during this celebration filled to the brim with Thai people armed with water guns, barrels of water and ice which they happily unload on passers by so be ready for this if you happen to be working through this period!

It's fun just to pick a point at the side of the road where you can spray these pick-ups trucks as they pass by but beware, you will get a get good soaking in the process. Staying dry isn't an option!

Kaosan road is an awesome place to enjoy this tradition as the entire road is filled with tourists, drinking beer, spraying water and making new friends. Definitely the place to be during Songkran.

One of the perks of teaching English in Thailand is the incredible amount of public holidays. I don't know exactly how many they have but it is at least double that of the U.K!

This gives you a chance to take a long weekend break to one of those beautiful Thai beaches in the south.

So now we come to the end. I hope I have at least peaked your interest in Teaching English in Thailand. I have taught here for 7 years and I'm still not bored of it. It has become a second home to me and when I do eventually return home, I'll be homesick for my second home, for all the reasons I mentioned above!

So why not give teaching in Thailand a go?

I hope you enjoyed this hub.

After reading this, do you want to teach English in Thailand?

Have you ever thought about teaching English in Thailand?