A Case For Religion In The Founding of America - Part 2

The Founding Fathers were very intelligent, learned men who ironically all came from some sort of religious background. There are 204 men in the group considered as "Founding Fathers." These men were involved in the signing of the Declaration of Independence, the Articles of Confederation, and the Constitution. They also attended the Constitutional Convention of 1787, served as Senators in the First Federal Congress or served as U.S. Representatives in the First Federal Congress. Of interest is that of the 204, every single one had some sort of religious affiliation. 54.7% were

Episcopalian/Anglican, 18.6% were Presbyterian and 16.8% Congregationalist with the final 9.9% covering the various denominations. Four of the signers of the Declaration of Independence were current or former full-time ministers. A considerable number were sons of clergymen and many served in churches as lay leaders. Historian Benson J. Lossing’s 1848 “Biographical Sketches of the Signers of the Declaration of American Independence” presents the widely held belief, held both then and now, that there was divine intent or inspiration behind the Declaration of Independence. He also identifies the signers as "instruments of Providence" who have "gone to receive their reward in the Spirit Land."

Another revealing fact is that a majority of these men cited the writings of English philosopher John Locke as a major influence. In Locke’s “A Letter Concerning Tolerance” he writes,

"Lastly, those are not at all to be tolerated who deny the being of a God. Promises, covenants, and oaths, which are the bonds of human society, can have no hold upon an atheist. The taking away of God, though but even in thought, dissolves all; besides also, those that by their atheism undermine and destroy all religion, can have no pretense of religion whereupon to challenge the privilege of a toleration." 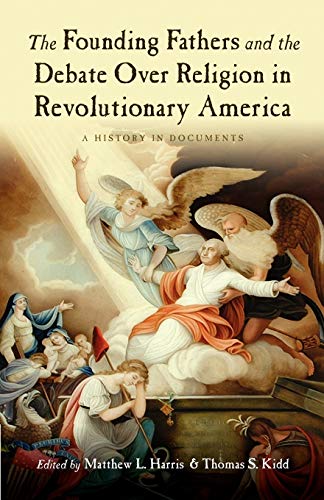 The Founding Fathers and the Debate over Religion in Revolutionary America: A History in Documents
Buy Now

Clearly, behind this idea of tolerance came the ideas of morality and virtue. The colonies early on were autonomous and rarely saw eye to eye on anything, let alone religious beliefs. However, at the onset of the Revolution it was clear that in order for the endeavor to succeed, tolerance was necessary and their leaders required being examples of high moral qualities. The colonists themselves needed to embrace a higher devotion to the people of not just their own colony, but of all the rest, as a whole. Scholar Michael Novak provides an interesting example of how morals were critical when he stated in a 2006 essay,

Washington had to avoid frontal combat, and to rely on the moral endurance of his countrymen year after year. To this end, Washington issued an order that any soldier who used profane language would be drummed out of the army. He impressed upon his men that they were fighting for a cause that demanded a special moral appeal, and he wanted no citizen to be shocked by the language and behavior of his troops. The men must show day-by-day that they fought under a special moral covenant.

When Congress convened on September 7, 1774 the very first order of business was a prayer. The prayer was not some generic, Deist prayer to some “natural” god, it was a Psalm 35 in the Book of Common Prayer. Many men such as Washington, Jay, Lee, Rutledge and Randolph, along with the other Puritan patriots bowed in solemn prayer. John Adams wrote to his wife Abigail that night relating the events of that prayer and said,

"I never saw a greater effect upon an audience. It seemed as if heaven had ordained that that Psalm be read on that morning. It was enough to melt a stone. I saw tears gush into the eyes of the old, grave pacific Quakers of Philadelphia. I must beg you, Abigail, to read that Psalm."

Clearly many of the Founding Fathers embraced religion as a necessity for forming this new nation. Many, while certainly agreeing that government had no place dictating the beliefs of its citizens, clearly believed that sort of tolerance came from a higher being than themselves, thus once again bringing religion into the picture. Men such as Benjamin Franklin and Thomas Jefferson, who clearly portrayed a non-Christian stance on more than one occasion, concedes multiple times in writings that God, Jesus and Christianity have some forbearance on the matters of morality, governing and leadership. Franklin wrote to Ezra Stiles in 1790 and stated that,

"As to Jesus of Nazareth, my Opinion of whom you particularly desire, I think the System of Morals and his Religion, as he left them to us, the best the World ever saw or is likely to see."

The Faiths of the Founding Fathers
Buy Now

Thomas Jefferson, in his Summary View of the Rights of British America in 1775 stated that, “The God who gave us life, gave us liberty at the same time.” Other men such as John Adams and George Washington were much more precise in their views of religion. Both of these men made it very clear that religion was paramount in the success of the new nation and while fostering the John Locke concept of tolerance still gave credit to the Jewish and Christian religion when the subject arose. Adams spoke during a July 4th celebration in 1821 saying,

Washington on many occasions referenced God. On May 10, 1789, in a letter to United Baptist Churches in Virginia, Washington wrote,

"I have often expressed my sentiment, that every man, conducting himself as a good citizen, and being accountable to God alone for his religious opinions, ought to be protected in worshipping the Deity according to the dictates of his own conscience."

Most certainly the clearest sign of Washington’s belief that religion not only controlled his destiny, but the destiny of America, was his farewell speech of 1796 in which he matter-of-factly states that attacking religion was unpatriotic and that without a religious belief the legal system would collapse because of the oaths that were required. He believed that the moral integrity of the nation relied completely on its religious beliefs when he said, “Of all the dispositions and habits which lead to political prosperity, religion and morality are indispensable supports.”

The case for religion in the founding of the United States is a case that will not end with one dissertation or even with the writings of the Founding Fathers themselves. America is a land of diverse people and beliefs, and that diverseness is what makes us who we are and separates us from other countries where religion is dictated and not allowed to be an extension of the inner virtues and moral beliefs of the people. But those same virtues and moral beliefs require a foundation, quite similar in that the nation required a foundation, and that foundation is indeed the religious beliefs of the people of the British colonies, the Founding Fathers, and the lives they have influenced for over 250 years. The case for the nation as a Christian nation is not as important as the case of a nation founded on the Christian principles with a real, personal God that interacts with that nation. But more-so that without that interaction the birth of a nation that is unrivaled in its success in such a short period a time as any in history would most likely not exist as we know it today.