The Day After The Race Before

Just 24 hours after the frenetic West Midlands All Day Bird Race, I awoke on a bright Sunday September morning determined to have a much easier and lazier day. I'm not normally one for lounging around on the sofa though, so I elected instead to spend the morning at a site called Ryton Pools over in a leafy corner of Warwickshire. Ryton is characterised primarily by a fairly large area of mixed deciduous woodland and an old gravel pit now transformed into the pool that gives the site its name. I had only intended to spend at most a couple of hours leisurely exploring the woodland and following what I presumed were easy to navigate trails. At first, I paid little attention to where I was going instead focusing on the wildlife, including a kronking Common Raven that passed overhead and a Common Frog that I spied in the leaf litter. The tiny amphibian allowed me to gaze at it for a few moments before hopping further into the undergrowth.

However, distractions can prove costly, especially in a place that I was unfamiliar with. After coming to a crossroads in the forest, I relied on my instincts which pulled me to the left, so I followed the trail, thinking that it would take me back to the start, but I was dead wrong. Instead, I ended up almost walking into what turned out to be a college where aspiring Warwickshire police officers go to train. Feeling rather foolish, I simply turned round and retraced my steps. A 2 hour visit had mushroomed into a 4 hour marathon.

Where are Middleton Lakes? 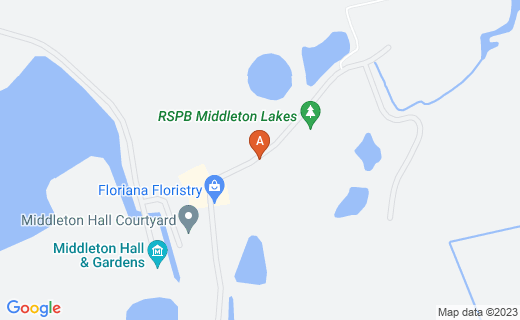 A Tour Of Middleton Lakes

Myself and my girlfriend Paula had actually made plans to visit Middleton Lakes on the Sunday afternoon earlier in the week, mostly because I hadn’t been there for a while and also because I, in particular was eager to see some waders after failing to see any at Elmdon Park the day before. But a report came through on my phone shortly after lunch that would provide me with a much needed opportunity to boost my year list, which at the time stood at 208. The report was clear enough ’juvenile Curlew Sandpiper on the East Scrape’. So without further ado we made the short hop from my Birmingham home to a place that has sometimes been referred to as ‘the Minsmere of the Midlands.’

Middleton Lakes is owned and managed by the Royal Society for the Protection of Birds (RSPB) and is quite simply a beautiful and tranquil mosaic of different habitats, including wetlands, meadows and woodland set in the heart of the lush valley that surrounds the River Tame, a waterway that runs almost straight along the Warwickshire and Staffordshire border.

Both Paula and I walked fairly briskly to the East Scrape, past Heronry Corner, and the strangely quiet feeding station, although a quick inspection betrayed the presence of a Brown Rat hungrily nibbling on peanuts that had scattered across the floor. On we pressed through the Mill Plantation Wood, still looking rather lush despite the lengthy summer drought that had hit the UK hard this year. The resident Rookery seemed rather quiet, either that or I simply wasn’t paying attention. Its difficult to ignore hundreds of noisy Rooks though. At Fishers Mill Bridge, we paused for an instant to gaze up and down the Birmingham and Fazeley Canal in the hope of finding a barge for Paula to photograph, but none were forthcoming on this occasion. Once clear of the bridge, we found ourselves at the Lakes themselves. Middleton was essentially created out of an old quarry, and the old gravel pits now act as a wildlife haven. Although, a portion of the surrounding area is still put to its former use.

After quickly scanning the first pool, also known as Fishers Mill and finding nothing particularly of note, apart from a Cetti’s Warbler producing its amazingly powerful series of liquid sounding notes from deep within the reedbeds, we pressed onto the next pool, the Jubilee Wetlands, home of the East Scrape and hopefully still the temporary home of the juvenile Curlew Sandpiper. I made note of both the English Longhorn Cattle and Konik Ponies that roamed freely, albeit inside an electric fence that surrounded the wetlands. Still, in my mind’s eye I was transported back to prehistory where ancient Aurochs and Tarpan Horses no doubt grazed habitat similar to this alongside Deer and Wild Boar. I could almost hear the distant howling of Wolves, who would have hunted all of these herbivores with great eagerness.

Upon arrival at a reed-bed screen that acted as a viewpoint across the West Scrape, I was greeted by a birder who had been taking photographs of what I could only guess were the Ponies, judging from where his lens was pointing. As I set up my scope to scan across the West Scrape and the southern part of the Jubilee Wetlands, he informed me of the Curlew Sandpiper’s presence and told me that it had now flown from the East to the West Scrape and sure enough a glance to my left revealed about half a dozen birders all training their scopes and binoculars on a small part of the West Scrape. Without further ado, Paula and I relocated.

We shuffled up to the group of birders and acknowledged them quietly. As I set up my scope, Paula perched herself on a nearby bench, content with taking in the scenery and taking photos of sleeping Canada Geese, her favourite bird. Yours truly meanwhile, was busily taking note of 3 wading birds close to the shoreline of the West Scrape. The first 2 were clearly juvenile Ruff, a relatively common visitor to the Lakes, the 3rd wader, the smallest of the lot was the one getting all of the attention.

At first glance, Curlew Sandpipers are often overlooked and simply identified as Dunlin, on account of the two species similar size and at certain stages of the year and its life, its appearance. But through study and experience Curlew Sandpipers can easily be separated from the much more common Dunlin. The most noticeable feature is the slightly down-curved bill that gives the bird the first part of its name. Moreover, Curlew Sandpipers tend to have longer black legs than a Dunlin and a slightly longer neck too. Juveniles possess a distinctive supercilium or eye stripe which Dunlins do not and they often carry a pinkish flush on its breast, as this individual did.

I don’t possess a camera, instead when it comes to capturing images of a bird I rely on a technique known as phonescoping, whereby I simply hold my phone up to my scope lens and adjust accordingly until I get a clear and clean image. It’s possible to get really good photos this way, but there are drawbacks, the most obvious being that capturing images of birds in flight is nigh on impossible. Still, this bird was far too busy feeding frenetically to think about flying (or so I thought!) for the moment and I was able to get a few half decent images. However, before I could try again, the bird suddenly took flight and was quickly lost to view.

I trudged back to Paula and informed her that the bird had gone, being the understanding girlfriend she is, she told me that the photos I’d taken were good, but I wasn’t satisfied, but hey ho. We left the other birders and began exploring the rest of the Lakes, walking along the Seasonal Trail that separates the Jubilee Wetlands and Fishers Mill. About 100 yards along the trail, I set my scope up again and cast my eye back to where I’d been watching the Curlew Sandpiper moments before. To my amazement the bird was back, feeding alongside the 2 juvenile Ruff as if nothing had happened. I reeled off another few shots, only marginally better than the first set, but clear enough for a Curlew Sandpiper to be identified easily. Now satisfied, Paula and I carried on around the Lakes before settling on a bench overlooking the North Pit to enjoy a well earned cup of tea. The North Pit is often the best place on the site to catch a glimpse of the scarce but increasingly common Great Egret, but there was no sign on this particular occasion.

With darkness creeping up on us, we headed back to the car. Along the way we bumped into a couple of the birders we had seen earlier, one of them asked me if I had seen the Cattle Egret? My eyes widened in surprise. ‘Cattle Egret!! Where was that?’ He then pointed over to the distant East Scrape and said that he had seen it fly up out of the long grass near where the Cattle were grazing and flew away. Apparently if I’d been a little quicker I would have seen it fly off, but that’s the key to good birding, its all about being in the right place at the right time.

Why The Big Deal?

You may be wondering why then, a small and rather unspectacular looking bird would warrant me interrupting my usual Sunday afternoon’s birding? Well, the main reason is that Curlew Sandpipers do not breed in Britain. Instead they breed in Arctic Siberia and then migrate to the African continent to sit out the bitter northern winter. For birders like me in Britain and Europe, now is the best time to catch a glimpse of these waders as they often use wetland habitats such as Middleton Lakes along their migratory route as valuable pit stops. Their numbers do vary with each year though, so whenever one turns up locally they’re always worth a look, as you never know when you may get to record one on your year list. For me, it was a very useful year tick, my 209th bird of the year at the time, and my first Curlew Sandpipers since I saw 4 juvenile birds over at the Upton Warren Reserve near Droitwich, Worcestershire just over 2 years before.