After a morning walk around my local patch, I was in desperate need of a bit of peace and quiet. You see, any given walk around my local patch is fraught with incidences that often leave me shaking my head or silently condemning an absent minded person or persons. Usually it involves a person unable to control their dog. Such an incident occurred on a recent visit, where a lady's Springer Spaniel got loose and chased the flightless domestic Geese that live on an island in the middle of the lake. Luckily the geese escaped (just) and the dog was eventually restrained, but only after a lot of shouting and splashing- yes the lady actually had to enter the lake in order to control the dog. As a bystander with my own dog safely on a lead all I could do was shake my head in resignation. There are signs all around the lake telling people to keep dogs on leads for the consideration of wildlife, but these are routinely ignored.

After grabbing some lunch, I felt the need to simply get away from it all, and for me the best place within an easy drive of home is Ladywalk Nature Reserve. Ladywalk is one of several reserves managed by the West Midlands Bird Club and in order to gain access to it you must be a member of the club. As a proud member I knew it would be the one place where Paula and I could escape from our fellow humans for a short time.

The route to Ladywalk has always fascinated me. I remember when planning my visit, looking at a map of it on the Internet and wondering how on earth you get to it, as most of the area to the north west is covered by an industrial estate known as Hams Hall Distribution Park. I remember having visions of having to drive through a barrier and presenting my club badge to a terse looking security guard. However, fortunately none of that was required; but still, whenever I come off the Lichfield Road at Hams Hall and start making my way down Faraday Avenue I cannot help but be struck by the surrealness of having to pass through a Blade Runner like landscape in order to reach a small piece of paradise.

I’ve rarely seen more lorries in one place (apart from Dover & Folkestone) and driving through I picked out names of companies I recognised such as BMW and most notably Sainsbury’s. Eventually that familiar brown sign directing me to Ladywalk Nature Reserve saw me veer away from the noise and chaos and towards an equally familiar padlocked gate. Once through it, Paula and I stepped into another world. 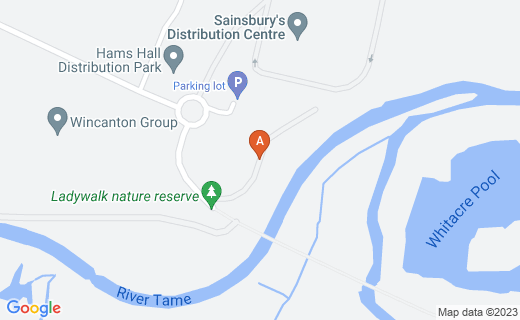 After locking the gate behind me and catching up with Paula as she parked the car, I made a point of gazing up at a couple of the huge pylons that are situated close to the reserve. These normally act as excellent vantage points for Peregrine Falcons who frequently hunt in and around the Distribution Park. On my previous two visits I’d struck gold, managing to obtain excellent views of a bird sat right at the top- some 200-300 feet above the ground. Merely looking up at it made me feel giddy, so goodness only knows what I’d be like if I happened to be where that bird was. On this occasion though, there were no Peregrines present on either one, so I contented myself with noting the birds present on the number of bird feeders that had been set up literally yards away from the car in thick vegetation. Most of the regulars such as European Robin, Dunnock, Eurasian Blue Tit and Great Tit, but on occasion a number of Common Chaffinches also joined the party. I’d hoped for a glimpse of either a Marsh or Willow Tit, as both occur regularly here, but none were forthcoming. I’d also hoped for a sighting of either a Common Chiffchaff or its rare Siberian subspecies, but once again was out of luck.

The weather in the days leading up to our visit had been terrible, with torrential rain raising the water levels of the nearby River Tame to dangerously high levels; but any fears I had of flooding were fortunately unfounded. Even so, the rain had left much of the reserve fairly difficult to traverse, so we elected to simply find a hide to sit in and hope for the best. After walking along the Tame for a short while, we passed through another locked gate, before coming into an area of woodland, mostly characterised by Birch trees. An open area acted as the home of the wood yard. I scanned the trees hoping once again for a glimpse of either Marsh or Willow Tit, but this particular patch was strangely quiet.

Unbowed, we made our way to the first hide that we could see. A wooden hut raised about 15 feet off the ground and accessible through a flight of stairs. To me this hide is known as A Hide or the feeding station hide; although other birders refer to it as the Sainsbury’s Hide. There are several hides situated around the reserve. My favourite is undoubtedly the Riverwalk Hide that can be reached by rejoining the River Tame and walking along until a sign directs you off to the left and up a fairly steep slope to the hide itself. From there you get cracking views of the Main Pool and virtually the whole of the reserve. On this particular visit though, we would simply remain in A Hide.

We quickly made ourselves at home as I set up my telescope, whilst Paula set to work on that most important of tasks...making the cups of tea. The feeding station was busy as always, with good numbers of both Eurasian Blue Tit and Great Tit flitting back and forth. European Greenfinches were also abundant and many of the feeders had at least four or five birds. Common Reed Buntings were also numerous, as they both competed and shared the feeders with the slightly larger finches. A glance at the floor revealed a group of Common Pheasants foraging for any seed that happened to spill from the feeders, whilst Dunnocks and European Robins in turn searched for scraps under the Pheasants' feet. Beyond the hedging that separated the feeding area from the rest of the reserve lay the Main Pool. A glance to my right revealed a large number of Great Cormorants in the trees that blanket the eastern shore. They were busily going about the business of either constructing new nests or making repairs to old ones; Ladywalk you see, is a regional stronghold for breeding Great Cormorants. Whenever I see one of these prehistoric birds flying over my house I always imagine that it more than likely started out life at Ladywalk.
The rest of the Main Pool housed a good number of regular but beautiful wildfowl including Mute Swans, Tufted Ducks, Mallards, Northern Shoveler and Eurasian Teals. I also noted a few Grey Heron stood like perfect statues on a series of small scrapes that dot the end of the pool closest to the hide. The highlight of our relatively brief trip though would occur just as the local time reached 4 in the afternoon. I hadn't expected it, the best highlights are always the ones that are unexpected. At first I wasn't even looking at the action, instead I was regaling Paula with a funny story I'd heard from a friend on a twitch a few years ago, when I saw something out of the corner of my eye. I knew at first glance that it was a raptor, but when I directed my full attention I realised that I wasn't just looking at another Common Buzzard. This bird was altogether larger but with a slimmer body, narrower wings and a longer tail. Moreover this bird was dark brown with a creamy white crown. There was little doubt in my mind that I was looking at a female Western Marsh Harrier. The bird appeared to my right and flew across the Main Pool heading across my field of vision towards the adjacent B Pool and proceeded to quarter over the reedbeds in the hope of securing a meal. However, the local crows are a vigilant bunch and the bird was soon picked up and hounded until it was lost to view.