Is the Speed Of Light Constant?

Albert Einstein demonstrated that the speed of light within a vacuum is the same, no matter the speed at which an observer travels himself.

The Theory Of Relativity For the Public

Relativity, The Special and the General Theory

-- by Albert Einstein (1920), with an introduction by Niger Calder (2006); Publisher: Penguin Classics - An Accessible Edition.

Scientist Albert Einstein wrote this book about 100 years ago as a volume that would instruct the general public in the basics of his theory of relativity. He intended it for readers who were not accustomed to reading texts concerning mathematics and physics every day. IT was to be a sort of the public friendly Psychology Today for the world of physics, but some writers and teachers have sometimes confused the public even more in discussing his small book.

Science fiction is based in science possibility, a phenomenon that draws increasing audiences to the achievements of NASA and privatized space companies. We watched Star Trek® play with future possibilities and today, we see them invented and used in real life. This was even more true during 1966, the 50th anniversary year of the television show.

Einstein had to imagine his theory of relativity and think about it in the abstract before he could write it down and, further, to make it clear to the general reader. This version of his document is more helpful to some readers than other versions have proved to be.

Logic will get you from A to B. Imagination will take you everywhere.

NASA astronauts and scientists helped to develop the STEM system of classes that Incorporated skills needed for the 21st century, particularly hard sciences, mathematics, engineering, and technologies. The iconic Buzz Aldrin has been one of the first advocates for STEAM education, which adds the arts to the mix.

The arts certainly help to spur the imagination, which Albert Einstein held in high regard.

Some scientists have attempted to help the general population, students, and dedicated science hobbyists to understand scientific endeavors and their dreams for the future. Some scientists are more successful than others in doing this, so we have had TV shows like Mr. Wizard and Bill Nye the Science Guy - kids watch, but so do the adults. The shows entertain as they instruct. Einstein may have wanted to do that.

Albert Einstein demonstrated that a sense of imagination, a childlike sense of wonder, and a sense of humor are important in scientific investigation.

As a student, I wrote English reports on science fiction.

Relativity, The Special and the General Theory By Albert Einstein, is short and engaging. This translation from the German includes a lot of understandable information about physics that people in general can enjoy.

Einstein wrote his document with the hope that it would help readers to understand his notions of time and space as he conceptualized it his general and special theories of relativity. He must have succeeded in some parts of the world, since we hear "Space-Time continuum" very often in pop culture.

This particular book is an easy to read and effective summary of Einstein's work about the relationship between and among the elements of light, time, and dimensional realities. I suggest reading this first before tackling a physics text book on the subject. Then read the text book with a sense of imagination.

Albert Einstein's work states that our Space-Time Continuum includes up, down; left, right; forward, backward; and time. This is a four-dimensional space.

Even those who know nothing of physics will find some bits of the writing very intriguing, with diagrams and explanations that are easy to follow. The appendices to the book include "Simple Derivations of the Lorentz Transformation", which would be a good aid to any high school or college student taking introductory physics courses.

The next appendix is "Minkowski's Four-Dimensional Space ('World')" and is an interesting, helpful further simplification to Lorentz. The third appendix contains "The Experimental Confirmation of the General Theory of Relativity" that straightforwardly explains light deflection, displacement of spectral lines, and the effect of movement(s) on time.

A Cube In Four Dimensions

Calder's introduction paves a solid path toward reading the text and the appendices wrap it up nicely, in my opinion. After reading this book originally published in 1920, it is interesting to read Flatland by Edwin Abbott in 1880, Burger's 1983 Sphereland, and the 1940 short story by Robert A. Heinlein entitled And He Built a Crooked House (also known as "The Tesseract").

Taken together, many people find it exciting that these four books and a story begin to show us how imagination and science fiction are becoming scientific fact and modern invention.

I have re-read all of these books recently and recommend them to anyone that enjoys science fiction, math and science, and good story telling.

I like nonsense; it wakes up the brain cells.

Don't miss a modern book called Flatterland, by Ian Stewart in 2001, reviewed on the website of The Mathematical Association of America (MAA Online) by Thomas F. Banchoff. It is an entertaining statement about non-Euclidean geometry and a tribute sequel to Flat Land. An excerpt of the review follows:

"Like Flatland only more so" is the cover claim of the new book by my friend Ian Stewart, and, like most Flatland purists, I was very skeptical when I first encountered that description. But I ended up by writing a recommendation for the back cover that fairly accurately but slightly incompletely registers my evaluation: "Flatterland challenges readers to go beyond Flatland and deal with phenomena, not just in dimensions higher than four, but in many exotic geometric realms that stretch our imagination and powers of visualization. Readers who have enjoyed other works by Ian Stewart will delight in his play with words and concepts." 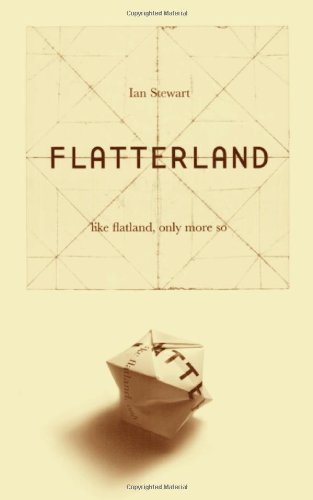 Flatterland: Like Flatland, Only More So
This books captivates people who begin reading it - even high school students who hate mathematics (like geometry). Give this book a chance if you enjoy thinking about multi-dimensional space.
Buy Now